By Angela Long | 21 July 2011, 11:07am | comments |
Angela Long watched in amazement as Rupert Murdoch sat meekly at a table and let British MPs grill him about he runs – or not – his media empire. Here, she reviews the event and the subsequent media coverage. 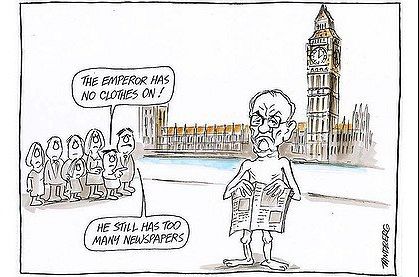 ‘Jonnie Marbles’, as he calls himself, hijacked the Murdoch hearings, towards their end, in the House of Commons. But it was only momentary, and one irony is that there is no News of the World to buy his story.

People had queued for eight hours to see the only show in town. Thousands of people who have only vaguely heard of Commons Committees were on the spot in London or at the screen of their TV or laptop, watching a spectacle worthy of the Roman Colosseum: the most powerful media magnate in the world, with his son and heir, being grilled by a hostile group of politicians.

Rupert Murdoch and James Murdoch faced their accusers – and former captors, in their power to embarrass politicians – in the Wilson room at the House of Commons. Behind James sat a phalanx of lawyers, while Rupert had Wendi Deng, his third wife, inches away.

“This is the most humble day of my life,” Murdoch senior declared at the start of proceedings. And that’s why the crowds were there, some of them gathered still with placards reading ‘Smash Murdoch’s Evil Empire’ and ‘He’s Got to Go’.

The Twitter joke, and pic, was the resemblance to Mr Burns and Smithers of The Simpsons. And at first it did seem to have qualities of caricature, with Rupert Murdoch answering in monosyllables, unable to hear questions, or leaving long silences before he spoke. Was this a piece of theatre, with a befuddled elderly man-character set to fend questions in one way, while the youthful business-school graduate parroted ‘Sorry, that was before my time/I have no knowledge/I am not aware.’

‘He looked like an old and broken man or at least he made out that way,” said former Sunday Times journalist, Christopher Hird, at the scene.

“Physically, he seemed more like an old man today, and less like the head of News Corporation,” a BBC journalist told the PM programme.

The 13 MPs around the committee table – unlucky for some? – concentrated on the phone-hacking scandal, but wandered into areas such as whether the appointment of James Murdoch as chairman of News International was nepotism (!!), and if Rupert had to use the backdoor to Number 10 Downing Street to keep visits to the British prime minister secret.

‘I did what I was told,” Murdoch senior said drily, but making sure to add that this happened with more than one PM, including Gordon Brown. (Brown has waged war on Murdoch newspapers recently, after a lengthy broadside about intrusion into his private life during the Commons debate on the News Corp bid for BSkyB last week.)

Rupert Murdoch also emphasized the distance he has had from his newspaper editors, minimizing the influence he has over their daily choices.  ‘”I’m not really in touch,” he said at one point. An admission – or a subterfuge? He said the only editor he would talk to regularly is that of the Wall Street Journal, because his offices are in the same building. (For Australian interest, one-time Melbourne Herald cadet Robert Thompson is the publisher, effectively editor, of the WSJ.) Both Murdochs declared they knew little of the News International phone-hacking and subsequent payments to those interfered with, and that little was mostly after the event.

Murdoch senior answered straight and simple, but James the Son went around the houses with polite and detailed answers, ultimately saying very little.

As opposed to the testy old man, his cleanskinned approach was of sweet reasonableness.

James Murdoch used the phrases ‘I have no knowledge’ or ‘ I have no direct knowledge’ at least a dozen times – perhaps 20 – when asked about phone-hacking, payments to victims,  behaviour of senior managers and editors at News International. He pointed out several times at the onset that he took over at the end of 2007 – just after the first trials of a reporter and a private detective who had hacked phones for the News of the World.

The session came to life when Tom Watson, the Labour MP who has made the running on the phone-hacking scandal, had the floor. Watson didn’t pull any punches, and insisted on questioning Murdoch senior first, despite repeated interventions by the Son.

‘At what time did you find out that criminality was endemic at News International?’ Mr Watson asked sweetly. ‘’Endemic is a big word,’ growled Rupert Murdoch, though he did go on to say, as he has before, that he was ‘shocked, appalled and ashamed by the Milly Dowler case”.

When asked if he should have known more about what was going on, Murdoch reared up to self-defence, in a way.

“No one kept me in the dark, I may have been lax, it was a tiny part of my business,” said Rupert. And true it is – newspapers, all his many newspapers around the world, make up less than 15 per cent of his profits, according to the latest Economist magazine. The News International papers (The Sun, Times, Sunday Times and, up till a fortnight ago, The News of the World).

One point observers noticed was Rupert Murdoch’s hitting the table. Both James and his wife, Wendi, seated directly behind him, gently cautioned him to stop this, perhaps an indication of the fury in his breast at being brought to this pass, after nearly a lifetime telling everyone what to do – journalists, wives, presidents and prime ministers.


(This story was originally published in ALongsword.com on July 19, 2011 and has been republished with full permission.)

The Murdochs and ethics - this is serious

10 July 2011, 10:19am The baby, the old saying goes, can sometimes be thrown out with the bathwater. But ...
Join the conversation
comments powered by Disqus
News updates