After cutting funding by $1.2 billion, why is the Morrison Government now calling a royal commission into the aged care sector?

ROYAL COMMISSIONS are not something to be taken lightly. They are serious, they have consequences, are costly and usually occur as a result of public pressure, obvious necessity, or even for political advantage.

The Financial Services Royal Commission is proving particularly embarrassing for the banks and the Government who resisted one for three years, despite pressure from the Opposition.

The Royal Commission into Institutional Responses to Child Sexual Abuse was highly successful in disclosing the systemic and inhumane nature of a period when our young should have been experiencing the laughter and frivolity of their youth.

.@ScottMorrisonMP on the aged care sector: I want to know the things I do not know. The reason I have asked for this royal commission to occur, is I want to be assured how widespread these incidents are.

Prime Minister Morrison's latest announcement of a royal commission into aged care has similar connotations, in so much as it deals with the emotions of our loved ones as they approach the final canto of life.

So, the Government, out of the blue, decides on a royal commission. Amid all the chaos it has on its plate the question is, why? Particularly as aged care hasn’t been of great concern during this Government's tenure to date. As well, the responsible Minister, Ken Wyatt, couldn’t see the necessity as recently as two weeks ago.

Question Time on Monday (17 September) was also interesting in so much as the questions asked by the Government seemed to directly imply that the Government was doing an excellent job in the aged care portfolio. If anyone is at fault it must surely be Labor.

Having been in power now for five and a bit years without achieving much, it seems it's best for this Government if it blames Labor. As to the terms of reference, all we know is that it will inquire into both government and privately owned institutions and be directed at residential, in-house care and youth care in adult establishments.

Scott Morrison oversaw some of the cruellest cuts to aged care and now he’s pretending to be a friend to older Australians: https://t.co/lO8mqOnfQi #auspol #politas

The contentious issue in Question Time was over whether or not the Government has taken out $1.2 billion from the aged care budget.

The Prime Minister’s answer seemed like many of his answers, both convoluted and unfathomable as he claimed it wasn't a cut but a reduction in planned funding growth.

However, that didn’t gel with the wording in the Budget papers (below), which specifically said: 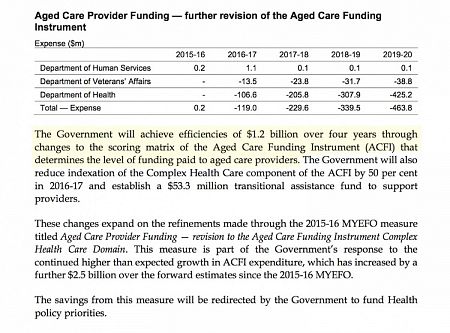 The aged care industry collectively warned the Government that its 2016 cuts would result in a decline in the standards of care.

So, the reason for a royal commission can only be that the Government was tipped off that the ABC Four Corners program on Monday night (17 September) would be particularly damning.

Aged care funding explained: Here's what has happened in the sector since the Coalition Government came into power #4Corners #agedcare #AgedCareRC https://t.co/zxxepwz1Cq via @abcnews

Was it? Well, having been involved in the system at a personal level when my wife’s mother and my own parents passed away, some years ago, I can only say nothing has changed. We experienced similar conditions as some in the program.

If the measure of any government, or country for that matter, is the way in which they look after their most vulnerable citizens then this government stands condemned.

Whatever one’s opinion of conspiracy theories might be, or the fact that governments have known about these problems for many years, it is a good thing the royal commission is taking place.

It would seem that as a nation we are devaluing the process of ageing. Even the $1,000 to help the disadvantaged and pensioners with funeral expenses was taken away in the last Federal Budget. How low is that?

People of my vintage need to know that the nation to which we have contributed so much will celebrate our lives by allowing us to tread the path of death with dignity. We need to know that our government appreciated our role, providing us with the means necessary to at least die comfortably with our self-esteem intact.

And to think that conservative governments would willingly give subsidies to mining companies making billions and tax cuts to large businesses instead of caring for its senior citizens?

It is scandalous in the extreme not to look after our old.

There have been many inquiries into the aged sector, so much is known about what needs to be done.

Life is but a poem we write ourselves. Why is the last line always the hardest when it should be the calmest?