Having been accused of political bias, John Lord examines how deeply this concept is ingrained in our news media.

IT IS OFTEN SAID we need an independent speaker of Parliament. At the same time, it is also said that we are all biased in one way or another.

It is a long-lost thought that the Fourth Estate, as the custodians of the public's right to know, might act responsibly, report fact and not just express a biased opinion.

An unbiased person is one who questions everything — what they see, what they feel, what they hear and what they are being told until they understand the truth of it. Having the ability to admit that you could be wrong is an absolute prerequisite to the independent mind.

We would be a much better society if we all took the risk of thinking for ourselves, unhindered by the unadulterated crap served up by self-interested politicians, the media and self-interest groups.

Some time ago, I received a message from a friend on Facebook which went something like this:

‘John, despite me being a leftie, I’m waiting for you to say something positive about the Government. Surely there must be something. Try and be more non-biased, please.’

To which I replied:

Andrea, there was a time when the LNP had some soul. People like Fraser and a few others still carried the residue of true Liberalism. The small ‘L’ types. It was a time when I thought that losing an election wasn’t the end of the world, that if you believed in democracy then you had to respect the other party’s right to win.

However, Abbott, Turnbull and Morrison have taken them so far Right that I cannot see any redeeming features whatsoever.

I have thought about policy areas and I cannot truthfully think of anything positive to say. You might suggest Marriage Equality, but the public drove that and they cannot claim the NDIS because that was Labor’s idea. Really, over six years and three Prime Ministers they have governed abominably.

My discernment tells me that if there is a bias it has to be in the 47 per cent of people who in the last Essential Poll said they would vote for the LNP.

Their denial of climate change appalls and infuriates me and their opposition to equality of opportunity in anything and everything simply disgusts me.

I’m sorry to disappoint because I am not, generally speaking, biased. At least I don’t think I am

To be honest, I agree with a lot of what you write, but I’m trying to also look for the good in the bad and bad in the good, if you know what I mean. So I guess what I’ve seen of your posts has been looking a little like the flip side of a Murdoch-type Liberal bias.

However, like you said, you’ve tried hard to find something positive in the Libs and haven’t been able to find anything, so that’s fair enough.

Now, Andrea’s suggestion that I am biased gave me cause for some critical self-analysis. In my head, I thought I had defined what bias was.

It is either an inability or unwillingness to want to understand an opposing point of view.

Music has always held a special place in my life. I have a collection of over 600 CDs and 150 live concert DVDs. I play the piano (badly) and have composed a number of songs. I have no bias to any particular genre of music and appreciate it all. My taste is very Catholic.

Books are like children to me and I have a family of hundreds. I treat them with a fatherly love but I show no bias or favour to any.

I have read the political thoughts of Hasluck, Menzies, Howard and Costello and many others on the Right. Again, my reading has no bias.

In the AFL I support two teams, so I could hardly be called biased. And I have played a variety of sports.

When Murdoch has ten headlines on the front page of the online Australian, I reckon that is bias. When we have a profusion of Right-wing shock jocks and not one from the Left, I call that bias. Murdoch has 70 per cent of the circulation of news in our major cities — that is bias.

In Australia, the mainstream media will only ever print or say whatever is in its best interests. This is blatant bias. Then it might say something interesting and truthful.

Bias is so blatant, so ingrained in the nation's news, that it is a pity that fact in journalism cannot be made compulsory and decency legislated.

So much so that, in the information age, those who control the dissemination of news have more power than government.

Let’s pause for a moment and study this Australian media bias chart from Reddit. 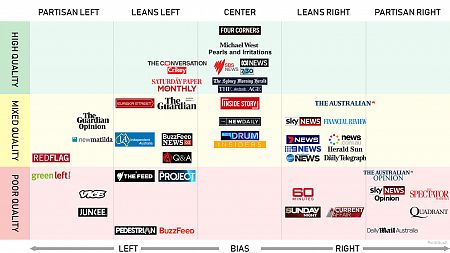 The first thing you will notice is that all the Left-leaning outlets are internet-driven. The Right-leaning is comprised of both internet and newspaper publications, with Murdoch having a stranglehold on print.

A biased person rejects everything out of hand and is incapable of objective reasoning.

Anyway, I will let others judge. Who knows? Next thing someone will say I’m a commo and that Karl Marx’s grave is a communist plot.

Something You May Have Missed in Reports About Murder of Israeli Student in Australia. Classic example of media bias against Israel. They either choose to not mention that she is an Israeli Arab or do so by saying she is a palastenian Arab. History repeats https://t.co/c5l1cDTMgu

Two things for MSM, 1. Tell the truth. 2. No political bias. In short, tell the truth and just report the event as it happened. Fake News is real in Australia,  ABC & SBS lead the way. pic.twitter.com/FVCIGjhrE6