The Morrison Government, misogyny and the tampon tax trick

The misogynist Morrison Government has used the removal of the tampon tax – which should never have been there – to paint itself as a champion of women, writes Canberra correspondent John Passant.

WHAT A DEMOCRACT we live in! All it takes to get some action from politicians is to ring them up.

Oh and be super rich. And host a radio show broadcast to millions every weekday morning. And be pushing something powerful interests want.

Alan Jones bullied the CEO of the Opera House, Louise Herron, on air. He wanted advertising material for the recently invented rich horserace, The Everest, plastered across the sails (or should that be sales?) of the building. Herron had generously agreed to displaying jockey colours, but not to words or brands. Jones threatened he would urge NSW Premier Gladys Berejiklian to sack her if she did not back down.

Faced with pressure from Jones and the powerful New South Wales horse racing industry, Berejiklian overrode Herron. The sails of the Opera House are now polluted and this may never end.

.@ScottMorrisonMP on using the Opera House to advertise horse racing: I would put an advertisement for the Bathurst 1000 on the Harbour Bridge if I thought it would get people there.

Big business and reaction win out once again.

That, in a nutshell, is the role of neoliberal parliaments and governments — to push through the wishes of the ruling class and try to convince the rest of us how the supposed "reforms" will be good for we hoi polloi. In a period of low-class struggle – as has been the case in Australia since the mid-1980s – the ideas of the ruling class, by and large, go unchallenged and their orthodoxy becomes our norm. Low strike levels mean not only low wages but also low-class consciousness.

In such a conservative climate, even victories for "the people" are not quite victories, but superficial retreats by the elite to reinforce the status quo. The recent decision by the Morrison Government to remove the goods and services tax (GST) on female sanitary products, known as the tampon tax, is a case in point.

As I wrote recently, Scott Morrison is the removalist, removing as many obstacles as possible to his re-election next year. But he is much more than that, as his machinations around removing the tampon tax – which should never have been there – shows. He is a superficialist and, in the current climate dominated by the powerful, he could well win back support for his Government on the basis of a few more three-card tricks such as this.

Why is it a three-card trick? For the cost of just $30 million in reduced GST revenue, the misogynist Morrison Government has been able to paint itself as the champion of women. The patriarchy has wrapped itself in the clothing of the matriarchy — all the better to continue the oppression of women.

#Tampontax to go, with states and territories agreeing to remove #GST from #sanitary products
Should never have been on therehttps://t.co/QDC812k9UY#Auspol #LNP #NSWpol #Springst #Qldpol #WApol @banas51 @Nobby15 @randlight

One of the arguments for removing the so-called tampon tax was that is would benefit poor women. I do the shopping for my family. Kotex (12pk) costs $4.50. The GST component of that price is almost 41 cents, a cost borne by the final consumer — in this case, women.

I am sure the cost of sanitary products is a burden for poor women. The first point I should make, however, is that on 1 January 2019, when the tax is removed, the price of sanitary products will not fall by 1/11th. Manufacturers, transport companies, retailers all will be vying to pocket part of the repealed tax with, I suspect, nonsense about increased costs. My uneducated guess is that the price will fall 4% to 5%. A saving of 20 cents on a packet of 12 is not going to abolish or even alleviate poverty.

However, even if the price of sanitary products were, miracle of miracles, to fall by 1/11th, that will not solve the poverty problem for women, either. We need a systemic approach to addressing poverty, one to which this Government is ideologically opposed. Morrison et al manage a system that creates and perpetuates poverty. They are not going to do anything that challenges the systemic drivers that see the rich growing richer and the poor, poorer. This is the logic of capitalism today.

Falling wages, growing inequality and increasing poverty are not aberrations. They are, in the absence of sustained class struggle, the end result of a system that, as Treasurer Josh Frydenberg said in relation to the interim report from the Financial Services Royal Commission, puts profit before people.

Of course, the poverty of women is not the only challenge. There is the related gender pay gap, estimated at 14.6%, which is its lowest (yes, lowest!) in 20 years. Removing the GST from tampons will not abolish that gap. 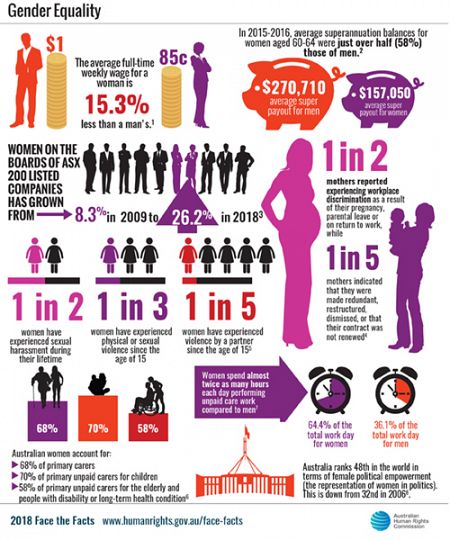 The pay gap and breaks in working life to have and care for children, plus working part-time, also help to explain the retirement superannuation gap. According to Industry Super Funds, that gendered superannuation gap stands at about 47%.

The ABC’s Andrew Robertson spelt this out:

Of single women who retire, 40% will live in poverty.

Superficial vote winners won’t change any of this.

Then there are the gendered drivers of violence against women or the gendered violence gap. The aim is not to increase female violence to the levels that men "enjoy", but to reduce male violence against women. As the Victorian Government has told us, removing gender inequality in all aspects of life for women in Australia would provide the basis for doing that. However, achieving equality would require the overthrow of current societal arrangements. In other words, a revolution.

It is time to move beyond the superficiality of a tax on tampons. Abolishing the GST and replacing it with a steeply progressive income tax and other progressive taxes to soak the rich till their pips squeak would be a good first start. The extra money could be used to lift pensioners, the unemployed, the sick and others out of poverty by increasing their payments to the minimum wage.

As to economic inequality, a fight in the workplace for higher wages, full-time work, free 24-hour child care and job security (to name a few) must be the start for that. If we don’t fight, we lose — and that is as true for working women as it is for working men.

Don’t be too polite girls. You have a world to win.

Exclusive: Two of Alan Jones’ business partners in the horse racing industry have contenders in the $10 million race - the one he demanded be advertised on the sails of the Sydney Opera House https://t.co/ukTimgxolI | @begley_patrick

File this under reasons the Liberal Party has problems attracting and promoting women members... pic.twitter.com/D5JpZEYgHr