The Liberal Party and the true believers

Why is the Liberal Party handing out how to vote cards for Fred Nile's Christian Democratic Party — and vice versa? Peter Wicks investigates.

In any election, trust is a major issue; people tend to vote for the Party or member they feel they can trust.

It is with this in mind I’m sure controversial NSW MP Fred Nile’s Christian Democratic Party came up with their slogan;

However, it is actions that speak louder than words and the actions of the Christian Democratic Party in the NSW seat of Prospect appear to have nothing to do with Christian values and very little to do with democratic process.

Sam Georgis is the candidate for the Christian Democratic Party and is also a pastor at the Kingdom Living Church in the electorate.

One of the early issues Sam had with his campaign was the issue of preferences, and his original how to vote forms had no preferences on them at all, as he was apparently completely unimpressed with the Liberal candidate — the alleged entitlement rorting Andrew Rohan, who in his first and likely last term in government has even failed on his meagre promise to deliver a roundabout.

However, after much wrangling, the Christian Democratic Party have ignored the Democratic part of their name and seemingly forced their candidate to preference the Liberal candidate after all. 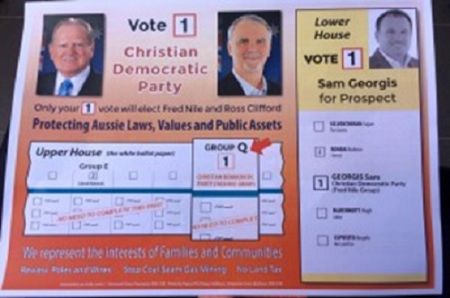 Now, I’m not the churchgoing type, however I do know that lying is supposed to be a sin, so I’m assuming that the Kingdom Living Church is of the same view. After all these verses from the bible seem to be pretty clear on the matter.

'You shall not bear false witness against your neighbour.'

'There are six things that the Lord hates, seven that are an abomination to him: haughty eyes, a lying tongue, and hands that shed innocent blood, a heart that devises wicked plans, feet that make haste to run to evil, a false witness who breathes out lies, and one who sows discord among brothers.'

'A false witness will not go unpunished, and he who breathes out lies will perish.' 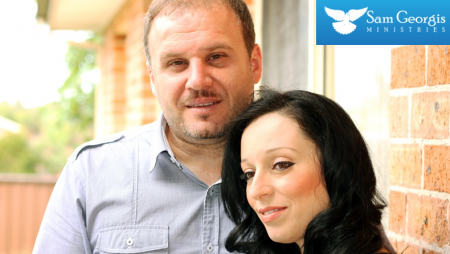 'But as for the cowardly, the faithless, the detestable, as for murderers, the sexually immoral, sorcerers, idolaters, and all liars, their portion will be in the lake that burns with fire and sulfur, which is the second death.'

I guess all that means lying and intentional deception is not something that a true Christian would believe in, however in the case of Pastor Sam, deception would appear to be a key part of his campaign strategy.

One of the pre-poll booths for the Prospect electorate has been the scene of some blatant deception.

As the photo’s below show clearly, here is a volunteer in a Christian Democrat T Shirt handing out Liberal Party how to vote forms. 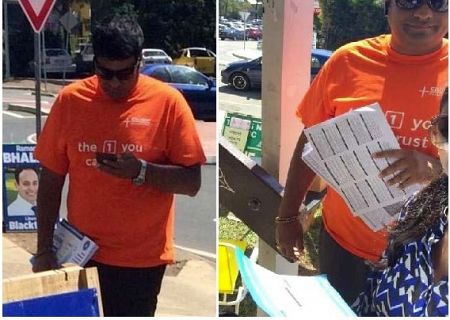 This is clearly highly misleading and shows a party claiming to be trustworthy that is anything but.

Below is a picture of a Liberal Party volunteer with a stack of Christian Democrat how to votes in his hand, however this man is handing out for the Blacktown candidate: 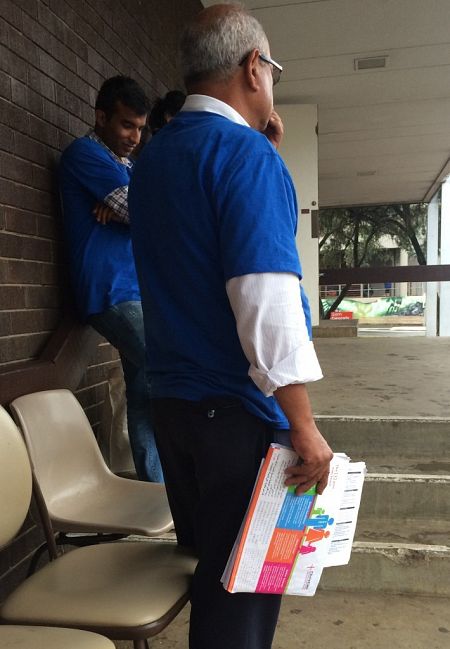 However one volunteer in particular yesterday allegedly set new standards in the art of blatant deception and intentional misrepresentation.

What is deceptive about this is that the girl in question is the girl on the front left of the photo below and is clearly a member of the Andrew Rohan team. So why is she masquerading as a Christian Democrat? 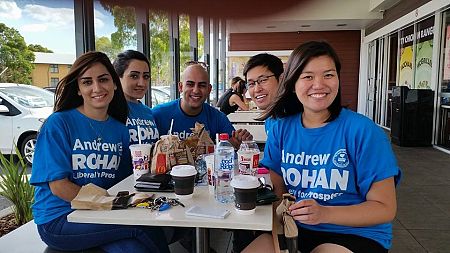 The girl on the right of the picture is the girl that allegedly dropped her off and helped her with the sleeves and waist of her Christian Democrat shirt. Her name is Melinda Boutkasaka and, not only is she a Liberal Party volunteer, she is also a member of Liberal Party MP Andrew Rohan's staff.

When I asked Pastor Sam about Andrew Rohan's staff member delivering him a fake Christian Democrat volunteer like a pizza, he asked:

“Do you have any footage?”

“Does that make a difference to your answer?” I responded, which in turn brought about the “No comment” cop out.

Pastor Sam however, was good enough to send me contact details for Valerie at the Christian Democratic Party head office. I contacted Valerie and sent her a picture of a supposed CDP volunteer handing out Liberal Party how to votes.

Her comment back was very telling, if not a little odd:

“This really shows me how much the Libs want to be CDP. I must say it seems in Prospect — it’s the right time to be CDP!”

Valerie would appear to be confirming the deceit, although implying that the Liberal Party was doing the deceiving. This may be so, however they are clearly being given the tools of deception – such as shirts – by the CDP.

It would appear to most that the Liberal Party are providing volunteers for the Christian Democrats — or at the very least the campaign office of Andrew Rohan is.

At the candidates' forum at Smithfield RSL, Pastor Sam had a room full of supporters as he talked about how he opposed TAFE cuts, and cuts to services such as hospitals, education and emergency services. Now, ironically or hypocritically, he is preferencing the Liberal Party — the very who have made drastic cuts to all of these services. Not only that, but he has Liberal Party volunteers handing out his literature.

So. what does it take to make Pastor Sam and his Christian Democrat Party supposedly turn their backs on the morals they preach to others? Just a couple of lousy volunteers, it seems.

Also at the candidates forum, Pastor Sam had a dig at the two major parties by loudly declaring:

“The CDP doesn’t even know what corruption is.”

Well Pastor Sam, it begins with misrepresentation and lies, so I guess perhaps you’re learning fast. Maybe it’s your choice of partner?

If you lie down with dogs, don’t be surprised if you end up with fleas.

Peter Wicks is a Labor Party member and a former NSW ALP State candidate. You can read more by Peter at Wixxyleaks or follow him on Twitter @madwixxy.

A vote for NSW Nats is a vote for for Fred Nile in Legislative Council. See Nats HTV here > http://t.co/QWHaGR0zK2 pic.twitter.com/aaemx0xIgJ