In most election campaigns, there are candidates that end up becoming a bit of a laughing stock and it seems that the campaign currently underway in NSW is no different, writes Peter Wicks.

INDEPENDENT AUSTRALIA has a reputation of showing the side of these candidates that the public won’t find in the flyers. Whether it’s the business dealings and chicken dancing of Ray Stevens, or the disappearing act of Jaymes Diaz.

The last NSW election saw the Labor Party slammed and deservedly so. Labor had corruption revelations surrounding a few of its MP’s and, as a result, Labor saw a record swing against them at the election. In the end, the Liberals picked up a couple of seats in Western Sydney, Labor’s heartland. This is something they are hoping to expand upon this time around.

This time however things are different, it is the Liberal Party suffering before ICAC with 10 members forced out of the Party and the resignation of a sitting Premier.

In the seat of Riverstone, the Liberal Party held off pre-selecting a candidate while awaiting the findings of ICAC to be released. They were hoping to have Bart Bassett, one of those sitting on what has become known as the "ICAC cross-bench", announced as the candidate the week before last. Instead, Kevin Conolly will run again, as the Liberals second choice to someone surrounded by a cloud of corruption allegations.

With decisions like that, it is no wonder Western Sydney is not looking so flash for them suddenly, particularly with other candidates on offer like Andrew Rohan.

It is early in the campaign yet, but Andrew Rohan who is the current Liberal member for Smithfield has jumped up into early favouritism in the biggest fool stakes.

The electorate Rohan hopes to represent is the new electorate of Prospect, which covers areas such as Smithfield, Wetherill Park, Greystanes, Toongabbie, Wentworthville and Girraween, amongst others.

Considering his performance it is little wonder even his own party see him as a long shot.

Most of you won’t know of the name Andrew Rohan and that is understandable — most people in his electorate don’t know it either. However, to his credit, Rohan is out there trying to get in front of people this campaign to get their recognition.

In his taxpayer funded community newsletter in November, sent out to thousands of homes, including those in his new seat of Prospect, he was good enough to let people know where he was going to be campaigning by holding mobile offices so people had a chance to see what he could offer the community. 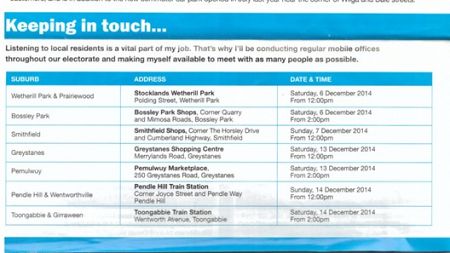 Utter failure. You will notice that the Pendle Hill and Toongabbie mobile offices were listed as being on different days but the same date. Whatever skills Mr Rohan may have, reading calendars is not amongst them.

Luckily, those who chose to show up with issues were looked after at the mobile office of the Labor Candidate Hugh McDermott, a few hundred metres up the road, where it has been a regular feature. It is understood many local issues were discussed there along with constituents making comments regarding Mr Rohan's competence.

This is not the first time Rohan has made newsletter gaffes. A booklet in multiple languages was also mailed out with taxpayer funds, in which Rohan invited people to 'drop in and say hello' at his office. Alas, those hoping to do so would have been dismayed to find that there was no address or even suburb printed on the booklet to explain where that office might be.

Upon realising this foolish oversight, Rohan did what any good Liberal would do and dipped once again into the public purse to have the document reprinted and resent to the same thousands of homes where it no doubt graces kitty litter trays to this day.

Residents claim that they have been bombarded by newsletters, booklets and Christmas cards from Rohan, which is fine — except that many of the recipients don’t live in his electorate.

With the new electorate boundaries, there are areas in Prospect that are outside the seat of Smithfield where Rohan is the current member.

Rohan is allowed to campaign in these areas, but he must do so using his own campaign funds. Instead, Rohan has sent numerous amounts of what can only be deemed campaign material to residents in the new Prospect electorate using taxpayer funds. 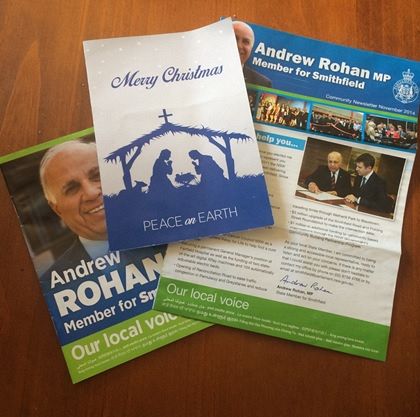 It has been alleged by many that could be a breach of parliamentary entitlements — in fact, there could be multiple breaches.

So how can we be sure that this was done using parliamentary entitlements? Because it is printed on the back of the mailouts and mailed out to residents outside his electorate bearing the parliamentary crest as the envelope in the next picture shows: 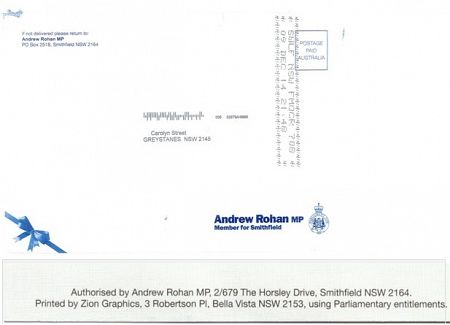 The NSW Department Of Parliamentary Service has this to say under the heading 'Use of entitlements for electioneering or political campaigning purposes'.

'The Determination of the Parliamentary Remuneration Tribunal states that Members' entitlements may not be used in relation to activities of a direct electioneering or political campaigning nature.'

I would interpret any correspondence with people outside a member's electorate to be campaigning, particularly when it informs people of times and dates of campaign mobile offices, Christmas cards and letters of introduction.

It is important to also note that, if proven, this would not be the first time Rohan has been found breaching the rules around Parliamentary entitlements.

In September 2012, Rohan was caught breaking parliament rules by using parliament funds on a mailout endorsing a controversial Fairfield Councillor candidate during the council election campaign.

Rohan also sent another campaign mailout to residents outside his Smithfield electorate using parliamentary entitlements last April as the letter bearing the parliamentary crest linked below clearly shows — the address on this letter is in the current Toongabbie electorate.

In the letter Rohan says:

"I am excited to be representing you..." 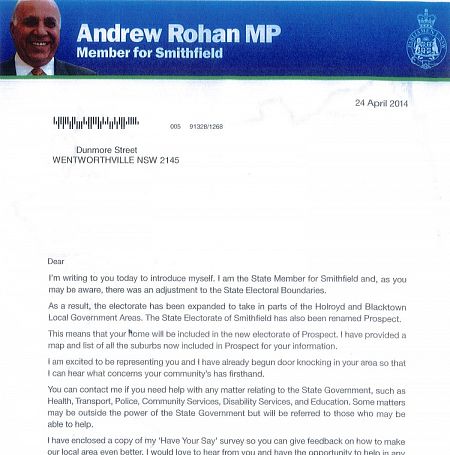 Unfortunately for Rohan, these people are already being represented by sitting members that were elected by the very residents he was mailing. Whether he represents them after the election is very much in the air.

Clearly, given Rohan's ongoing commitment to allegedly breaking parliamentary rules and misusing parliamentary entitlements, you would think that Premier Mike Baird would step in and sack him, however Baird has chosen to follow the Liberal tradition that has seen the downfall of so many of his colleagues in ICAC over the last two years and turned a blind eye.

So, what does someone happy to allegedly spend willy nilly from the public purse for their own purposes campaign about? Two areas of focus for Andrew Rohan have been education and transport.

Pendle Hill Railway Station – the same one where Rohan failed to show up to his own mobile office – is in need of a revamp and certainly a lift for the elderly and disabled. Rohan is promising locals the lift at the station that they have been long calling for — and that is an admirable promise indeed. However, the upgrade Rohan is promising is not in the Coalition's budget, therefore the funding for it just doesn’t exist.

In addition, the only reason the station needs a lift is because of a broken promise by the Coalition Government. Election promises are not recyclable, they are not something you can promise then fail to deliver and promise again next time. Last election, Transport Minister Gladys Berejiklian was campaigning with the Liberal candidate and promising that Pendle Hill station would be upgraded with a lift when they formed government. 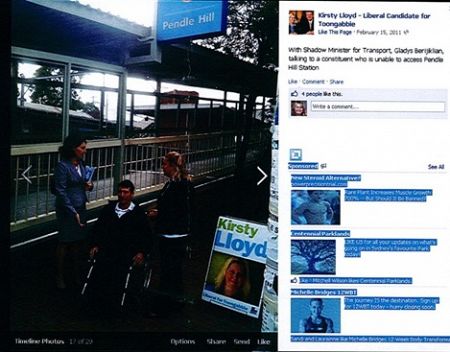 Gladys Berejiklian and Kirsty Lloyd talk over the top of a disabled man the last time a lift was promised at Pendle Hill station — before the 2011 election.

That was three years ago and, lo and behold, here they are promising it all over again. Presuming your electorate are stupid and naïve is not an endearing trait.

This campaign, we can expect to hear a lot of talk from the premier and other Coalition ministers from Sydney’s North Shore about how important "The West" is to them.

We can see how important the West is by the quality of candidates on offer, such as the one to eventually announced in Riverstone and the actions of the candidate for Prospect.

The people of Western Sydney deserve better. We all do.

Peter Wicks is an ALP member and former NSW candidate. Read more by Peter Wicks at Wixxyleaks and follow him on Twitter @madwixxy.