The Good, The Bad, and The Hilarious: 2016 Federal election wrap

It's been a mad roller-coaster ride for the nation Saturday night, when the Federal election results started coming in. Mordd recounts the action.

I’d like to start with a quote from a friend of a friend on social media, which sums up the current situation quite well: 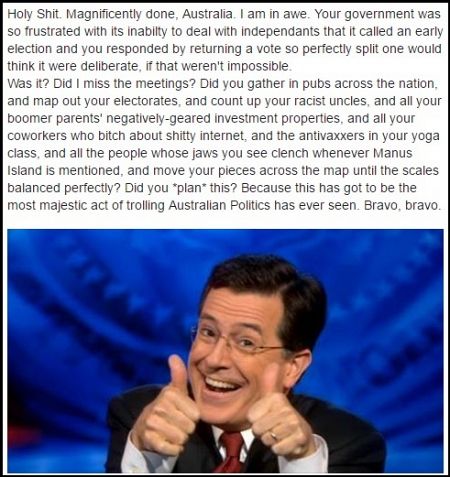 Before we get into the heavy analysis of the results themselves, lets take a look at the lighter side of the past 3 days first. Next up, was Laurie Oakes on election day evening, who undertook an epic troll of SportsBet, in what has become known as Tiegate. SportsBet had a bet running on what colour tie Laurie would wear in the election broadcast, Yellow, Black, Green, Gold, Blue, or Other. So Laurie wore all six colours during the night, changing out ties in between cutaways and breaks. 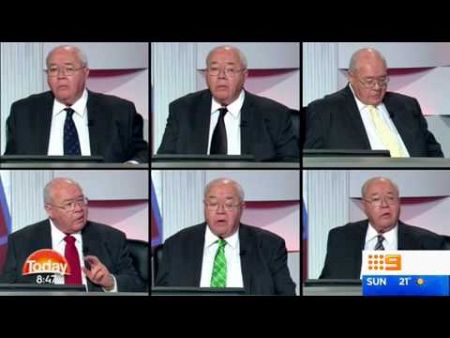 In the end, SportsBet tweeted that they were paying out on all bets. The Australian Young Greens summed up the overall situation for Turnbull on Sunday quite well with this gif:

As to the more serious side of things, first of all lets look at the current tallies being reported by the AEC and the major media outlets, which demonstrates just how hard this election is to call still at this moment.

The AEC as of Monday night 10:30pm, is showing these results for the House of Representatives: Liberal/National Coalition with 67 seats; Labor with 71 seats, Greens with 1 seat, Katter’s party with 1 seat, NXT with 2 seats, and 2 independents, with 6 seats undecided.

Fairfax is reporting the following: Coalition has won 70 seats, Labor 67 seats and the Greens one seat, with Independents and Minor parties claiming five. Seven seats are too close to call.

Newscorp is reporting: Coalition with 65 seats; Labor with 67 seats, Greens with 1 seat, Katter’s party with 1 seat, NXT with 1 seat, and 2 independents, with 13 seats undecided.

The ABC is reporting: Coalition with 68 seats; Labor with 67 seats, Greens with 1 seat, Katter’s party with 1 seat, NXT with 1 seat, and 2 independents, with 10 seats undecided.

I think it is safe to say at this point that the Coalition and Labor have won at least 67 seats each, but any more than that is undetermined until counting resumes today (Tuesday). I have also seen some media in the last 24 hours reporting 2 seats to the Greens, as well as the 2 to NXT the AEC is reporting, most outlets though are still only crediting 1 seat each at the moment.

A few major Liberal members have lost seats in this election or failed to reclaim their seat as expected, including young Wyatt Roy and Sophie Mirabella, along with the complete loss of Tasmanian seats to the Labor party.

As to the Senate results, we don’t know much yet but a few things are confirmed so far. Labor and the Coalition are both on around 30% of the first preference votes at the moment. It looks like the Greens have retained all but 2 current seats, but have picked up a new Senator as well, for a net loss of 1 seat. NXT is expected to pick up 3 or 4 seats, One Nation is also likely to take 2 or 3 seats — with Pauline Hanson confirmed already. Derryn Hinch is likely to make it in at this stage, as is Family First’s Bob Day. David Leyonhjelm is likely to take a seat, and Jacqui Lambie has retained her seat.

It is going to be an entertaining six years to come, I think I will be tuning into live Senate coverage a lot more often from now on. Both Pauline Hanson and Derryn Hinch are well aware of the parliamentary immunity granted to them in the chamber and both plan to make full use of the privilege to say things that would get them sued into bankruptcy if said publicly anywhere else. Expect to see some epic slanging matches not just between these two, but between these two and other entertaining and passionate Senators who will also be in the chamber with them. This will be fun to watch, for sure, even if at times we may want to look away in horror or disgust at what we have done.

In the ACT, all the mainstream media has already called the second Senate seat for Zed Seselja already. This is despite the fact that he is 2 points short of the first preference count quota he achieved last time around on the current counting for this years results and the seat is still quite likely to go to preferences. If it does, it will be a close race once again between Liberal and the Greens for the seat. There has been a swing against the Greens slightly in the Senate, similar to last time, but there has also been a significant swing against Liberal in general this time, so I think the mainstream media is being premature in calling the seat for Zed already.

Whether the Coalition or Labor will be able to form minority government is anyone’s guess at this point, both are just as likely as each other currently, with Shorten declaring he won’t include the Greens in a coalition and NXT declaring it won’t join a Coalition with Labor. These statements are often made though and, in the past, a different tone tends to be taken behind closed doors once the reality really sets in for all players involved. Don’t expect any of the parties to abide by their current statements on this as the endless rounds of negotiations are only just beginning.

Bill Shorten’s leadership is no longer in doubt and Labor has put away the knives and is looking towards forming minority government. Richard di Natale’s job as leader of the Greens is safe it appears. However, Malcolm Turnbull’s future on the other hand is very much in doubt, with at least one major Liberal luminary already publicly calling for his replacement.

Counting for the House of Representatives resumes Tuesday afternoon and we will know within a few days what the final make up of the House will be, but it’s unlikely that will result in us knowing who will actually form government and lead the country for possibly weeks to come still or longer. A hung parliament is all but certain at this point, along with an even more hostile Senate than before.

Get the good oil. Subscribe to IA for just $5.

11 January 2020, 11:00am Among the many animals perishing in the bushfire devastation is the iconic Austr ...

7 May 2019, 4:30pm Australia’s second only pill testing trial at a music festival has been hailed a ...
Join the conversation
comments powered by Disqus
Daily news
Get FREE daily updates from IA to your inbox.
Just in
SHOP AT IA