Scott Morrison’s crude diplomatic posturing over China's trade war insults will do us no favours and we would do well to learn from our Asian neighbours, writes Dr Rashad Seedeen.

DESPITE BEING our largest trading partner, Australia has increasingly treated China as a strategic rival and a rising superpower that should be viewed with suspicion. Such a stance has not gone unnoticed by the Chinese Government with the now infamous 14 Grievances leaked to the Australian press indicating a disgruntled State demanding a change in behaviour. The list is a rather crude and blunt form of diplomacy but is revealing of the long-held view of Australia by our Chinese counterparts.

The stoush has resulted in the People’s Republic of China (PRC) systemically turning the screws on Australia economically. Currently, there is an unofficial ban on Australian coal exports to China. This is huge considering in the first six months of this year alone, Australia exported $7.3 billion worth of coal to China.

Australian wine exports have copped an anti-dumping tariff of up to 200% as well as an additional 6.3 or 6.4% anti-subsidy tariff for an export-industry worth $830 million a year. The trade war now includes timber, barley, copper, ore and concentrate, sugar and lobster. China will take a hit but the long-term economic damage to Australia will be much worse.

A new low kicked off when Zhao Lijian, spokesperson for China’s Foreign Ministry, tweeted a digital artist rendering of an Australian soldier cutting the throat of an Afghan child carrying a lamb with the caption: ‘Shocked by murder of Afghan civilians and prisoners by Australian soldiers. We strongly condemn such acts, and call for holding them accountable’ and, within the graphic, the soldier saying ‘Don’t be afraid, we are coming to bring you peace!'

Shocked by murder of Afghan civilians & prisoners by Australian soldiers. We strongly condemn such acts, &call for holding them accountable. pic.twitter.com/GYOaucoL5D

The provocative tweet was in response to the Brereton Report into alleged war crimes committed in Afghanistan by Australian special force soldiers including the “blooding” of young soldiers, torture and mass killing of unarmed villagers or “squirters” as the SAS called them.

The tweet from Zhao was referring to details of a cover-up shared with military sociologist, Dr Samantha Crompvoets where she was told that:

‘[An SAS regiment approached] two 14-year-old boys whom they decided might be Taliban sympathisers. They stopped, searched the boys and slit their throats. The rest of the Troop then had to “clean up the mess”, which involved bagging the bodies and throwing them into a nearby river.’

Other incidents told to Dr Crompvoets involve men and boys tortured by special forces, sometimes for days, also another where soldiers opened fire upon fleeing civilian men, women and children followed by a manufactured excuse to legitimate a “sanctioned massacre”.

Prime Minister Scott Morrison’s response to Zhao was swift, emotional and diplomatically unbecoming calling a press conference to declare the tweet to be “repugnant” and demanded an apology from the Chinese Government.

Within the global community, Morrison looked rattled and China not only rebuffed his demand, Chinese Foreign Ministry spokesperson Hua Chunying doubled down on criticism of Australia’s treatment of Afghan civilians.

Zhao and the Chinese Communist Party (CCP) knew the response they would receive from the Australian Government (though it would have been surprising to see the Prime Minister bite back rather than someone from the Foreign Affairs department) and were willing to absorb the consequences.

And that is because their diplomatic response was not just about Australia. 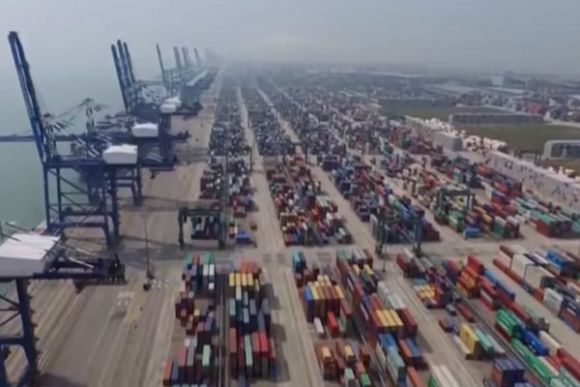 Beyond Australia, China was speaking to the non-Western world and, in particular, the Global South. This is telling for two reasons.

First, many of these governments are carefully watching how these events unfold so as to garner a deeper understanding of what happens when a middle-power from the West like Australia directly confronts an emergent global superpower like China. These States will learn from Australia’s mistakes and possible successes in diplomacy in order to better deal with China.

Furthermore, China is attempting to exercise growing coercive powers in trade and rather blunt forms of diplomacy to make an example of Australia. Such mechanisms are exercised as a form of deterrence to warn other States to tread carefully otherwise they might end up like Australia, in an extended trade deep-freeze.

Criticisms of China have come from the West, notably the United States, New Zealand, France and the United Kingdom. But the governments of the Global South and Asia-Pacific, specifically, were noticeably muted.

Second – and more interestingly – China is signalling to the Global South how they are willing to publicly condemn the West for the violence and war crimes committed in places like Afghanistan.

The war crimes detailed in the Brereton Report follow a similar pattern in Iraq, El Salvador, Vietnam and in the long, bloody history of colonialism. Yet these excursions were presented within a Western narrative frame as a “civilising mission” or interventions defending democracy and world peace. The Global South knows better.

When Zhao shared that party-sanctioned tweet, it was a message that there is finally a global superpower willing to publicly condemn a Western State for their atrocities in a foreign land. China might be a ruthless trade partner and violently repress the Uyghurs of Xinjiang and protestors in Hong Kong but unlike the West, they do not have a history of foreign massacres.

The tweet from Zhao reminds these governments and their people how the United States and the West treated the populations of the Global South during times of war and economic plunder. China, on the other hand, shares a similar past riddled with violent foreign intervention and exploitation.

The fact that Zhao’s tweet was shared by up to 57.5% of fake accounts in what Israeli cyber-security firm, Cyabra, described as “evidence of a largely orchestrated disinformation campaign” suggests that mass-spreading of such a message is an attempt at a new narrative in an ideological war focused on Western war crimes whilst moving the spotlight away from human rights violations in Xinjiang and Hong Kong.

The global complexities of international relations are hard to navigate. The West is increasingly treating China as an expansionist strategic rival while the Global South is far more pragmatic — willing to engage and treat with caution both superpowers. The Philippines, Indonesia and even Vietnam continue to walk the tightrope between China and the United States despite quite problematic histories and current geopolitical and security issues.

A report from the Brookings Institute demonstrates that the governments of Latin America and the Caribbean have also used the last two decades to develop a patchwork of economic and political engagement with both China and the United States with mixed results. In a world of multi-polarity, having the Global South in your orbit is obviously preferable.

For Australia, lessons can be learned from Japan. New Prime Minister Yoshihide Suga used his first overseas trip to visit Indonesia and Vietnam. Suga signed a defence export deal with Hanoi and provided a $670 million low-interest loan to Jakarta. Suga also deepened security relations with Australia through a defence pact.

Suga is making clear and systematic moves to diversify relations and contain Chinese expansion, yet is doing so without the belligerent bluster and crude diplomatic noise found in Morrison’s public displays. Japan has ongoing disputes with China over the South China Sea and tensions remain over Japan’s security arrangements with the United States, yet the two maintain productive and mutually beneficial trade and diplomatic relations.

Former Prime Minister and specialist in Sino-Australia relations, Kevin Rudd, has described Japan’s approach as “do more, talk less”. For attention-hungry Morrison, such a strategy is inconceivable.

What is unfolding provides us with important insights and lessons for the future. Australia can’t and shouldn’t match China’s diplomatic aggression and protectionist coercive measures. A multifaceted balancing act that defends sovereignty, democracy and human rights whilst pursuing economic and security interests must be underpinned by sophisticated diplomatic mechanisms. With Morrison at the helm, I don’t like our chances.