The giant conga line of suckholes

Broadcaster Bill Deller discusses WikiLeaks, the CIA and the ALP, and why Australia won't get a seat on the UN Security Council. 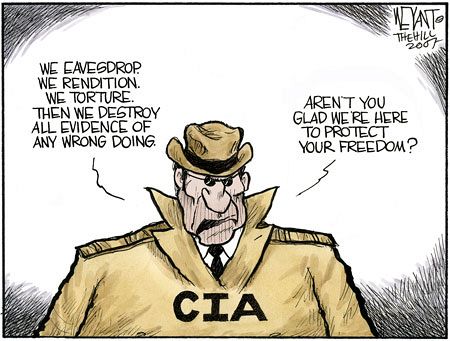 IN 1975, I was appointed as the Education Officer of the Western Australian Trades and Labour Council (we kept the "u" in Labor at that time)

I had spent a few years working for Hammersley Iron (HI) in Dampier (HI was a fully owned RioTintoZinc subsidiary, of which Queen Lizzy was the largest individual shareholder) and was a runaway from academic studies at LaTrobe Uni and the prospect of being bonded to the Victorian education department. I was, indeed, a long haired hippy type and, oh yes, and I did inhale and, worse still, I was on the road to becoming a "Commo".

My then boss, Jim Coleman, Secretary of the WA TLC,  was about to be elevated to the Industrial Relations Commission to make way for the new bright boy of the WA Labour movement. It was done as a last friendly act by the sacked Whitlam Government.

Peter Cook, who went on to become a senator and minister in Hawke and Keating's Governments, had joined the Eureka Youth League (the Communist Party's youth wing) in South Australia, but on advice from an elder, resigned quickly, acknowledging that it was not a good career move. In preparation for his ascension to the Secretary job, Cook took a scholarship to the Harvard Business School for Labor studies, which was funded by the CIA and attended by all the domesticated (or soon to be domesticated) Labour bureaucrats from around the world.

Cook's complaint about the course was not that it was funded by the CIA, but that they wouldn't allow him to bring back the daily cash allowance that the scholarship offered above the airfares, accommodation and "tuition fees".

Why do I raise this seemingly trivial issue now the bastard is dead and had a fine "career"? Well, simply because it reveals something of the relationships that existed and still exist on a wide-scale basis  between US intelligence and the Australian Labor Party.

At the same time, I would share a morning coffee with big Kim Beazley and the now disgraced former deputy premier of Western Australia, David Parker, who never made Cook's mistake of joining the EYL, but did know how to look after bags of cash in the name of Labor. These two would discuss in minute detail the percentage difference in the polling prospects of Democrat/Republican candidates throughout the length and breadth of the land of brave and the home of the free ― such was their affection for the place.

I was generally and increasingly alarmed at the cosy relationships that existed between Labor leaders and conservative governments. Cook, to demonstrate how reasonable and responsible he was, proposed at that time to use the WA TLC's Building Society's funds to finance the housing required for workers at a new aluminium facility in South-West WA ― even though the mine had an expected life of about 25 years, the mortgages would be for 20 years, and the village would be useless and worthless to the owners at the end of the project.

Along with others, we were able to scupper that deal but...

At that time, a young bloke working as a host for US Intelligence transmission in California Christopher Boyce* (who also inhaled a bit) was selling secret documents to the Soviets in Mexico to supplement his income.

The leadership of the ACTU in 1969 was in no small part facilitated by conversations that included the US Labor Attache (read CIA man) and at least one leading "Commo" led union, whose votes switched as a result of the conversation from Albert Monk to the about to be great leader Bob Hawke (whose mates deserve separate and detailed examination).

The time of which he speaks has many aspects; many unions and particular unionists were either on the payroll or were fellow travellers ― some of the mongrels are still alive, so we will reveal more as they go to meet their makers.

Then there is Marshal Green in the embassy, whose career path has some interesting highlights: Indonesia, 1963 to 65, where with CIA and Australian intelligence support, between 500,000 and 2.25 million Indonesians turned the river red with blood in the overthrow of President Sukarno and his now ironic alliance of Nationalists, Islamists and Communists (NASAKOM) and led to the installation of general Suharto.

Next stop Chile, where untold numbers disappeared after the installation of another great humanitarian ― remember General Pinochet?

Next stop Canberra, and who was Mr Khemlani  and what was the Canberra Coup, and the role played by former Trotskyist John Kerr, who had turned many years before his appointment and have a look at who he worked for after he saw the light.

I didn't need WikiLeaks to tell me that the CIA has had some influence over Australian politics; I am delighted, as are millions around the world, that Julian Assange has brought the secret world to the surface but these relationships are knowable if we are prepared to think read and observe.

So, despite Australian Labor's best attempts to buy and woo African and other states, the rest of the world know all too well that Oz is the USA's deputy or, as Mark Latham so eloquently expressed it, part of the giant conga line of suckholes.

* The Falcon and the Snowman is based on the true story of former altar boy and former Catholic seminary student Christopher Boyce, and fellow former altar boy turned drug dealer Andrew Daulton Lee, two young men from wealthy California families who sold classified government information to the Soviet Union during the mid 1970s.

The ABC is left wing? You must be joking!

The giant conga line of suckholes

13 October 2012, 12:01am Broadcaster Bill Deller discusses WikiLeaks, the CIA and the ALP, and why Australia ...
Join the conversation
comments powered by Disqus
News updates