The end of majoritarianism? The #QldVotes election result

In Queensland, as in the rest of Australia, Australian voters are starting to buck the majoritarian trend, writes Dr Binoy Kampmark. 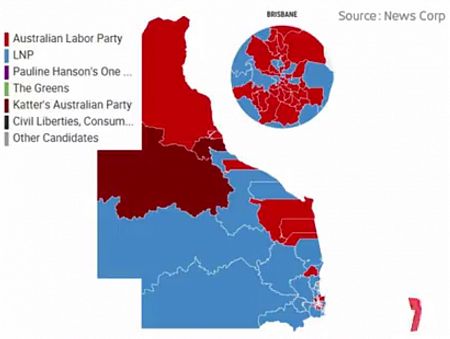 Electoral night, and here, Queenslanders were waiting to see if the reassertion of majoritarianism would again find its way into state politics. Their appetite for minority governance, it was to be hoped, was at an end.

This was a view that was being parroted as a reflex through the evening by Queensland Nationals Senator Matt Canavan. Members on the ABC election panel were treated to qualifiers, questions and criticisms about electoral trends that demonstrated a healthy scepticism of voters. But such health, for the Westminster system, is always questioned.

It was also implied by Labor’s own insistence, dogmatically and potentially detrimentally, that it would not govern in any coalition arrangement, but alone. For Annastacia Palaszczuk, it was a case of, “No, no deal, no, definitely not.”

Analysts subsequently saw this move as brave — a distinguishing feature of her campaigning. The inescapable point, however, was an acceptance on the part of the tedium inducing pundits that tribalism, rather than constructive governance, remains the norm of Australian politics.

Such thinking betrays, in advance, a genetic, pre-disposed hostility in the Westminster system to the notion of working partnerships in favour of a tolerable tyranny of the majority. Coalition partners (the exception being the historically tense, but accepted coalition between the Liberals and Nationals) are generally to be avoided. Convince voters that bruising, molesting majorities are the way to go. Forget the voices of the rest — John Stuart Mill was wrong.

Australian voters, in quiet defiance, are starting to buck the majoritarian trend. Minority governments come, with them, an acceptance that parliament comes before government. This principle, historically antithetical, is becoming more frequent. The Gillard years supplied the prototype at the Federal level.

The Queensland political scene was already looking colourful, given the potential influence exerted by Pauline Hanson’s One Nation Party, and Katter’s Australia Party. As the votes came in, it was becoming clear that the Labor vote had held in many cases, while the Liberal-National vote had slumped in crucial areas.

Outside the south-east corner of the state, the voting patterns were strikingly volatile. The major party groups – Labor and the LNP – struggled to forge ahead. Independents, as in the seat of Rockhampton, were surging. Katter’s Australia Party was nibbling at the edges.

The seats of Mundingburra, Macalister, Noosa and Thuringowa were tormenting those wanting certainty. ABC election analyst Antony Green kept calling this “a tale of two elections” — the rural sentiment, distant from metropolitan Brisbane, bound to play out differently from the urban skirmishes.

On Sunday at time of publishing, the ABC’s all-magical election computer had Labor had 43 seats to the LNP’s 35, with Katter’s Australia Party in hold of two. With 13 seats still in doubt, Labor are four short of forming government outright. Given that 350,000 postal votes still need to be counted, the results may still oscillate.

For a country keen to add its voice to the carnival of democracy, Australia’s voting systems puzzle. The preferential voting system, as opposed to proportional representation, has been the guardian of the major parties, their bloodline to guaranteed power. Independents and smaller parties are often left dry in the process of distributing preferences. Thank goodness, then, for the Australian Senate.

The logic of such voting is fundamentally at odds with actual representation. Rather than having a percentage of the state’s voters represented, there is only the second or third best choice that features. In the case of Queensland, where there is no upper legislative chamber, the case is even more striking. Voters are effectively denied their primary preference and are forced to vote for candidates they would not otherwise select. (To not do so renders the ballot invalid.)

The most striking, and arguably scandalous story of the election, was the manifestation of three horse races in various seats that tended to see victories for either the LNP or Labor. One Nation was, to use an expression from Green, the bronze medallist determining the positions for gold and silver.

Was this absurd unfolding a problem from a democratic perspective? Not for the major parties, tactically concerned whether PHON's preferences would flow to or away from them.  What mattered were bold and pure statistics, not manifesting actual political will or wishes. Nor did it seem to bother the political chatterers and smirkers, happy to see One Nation useful but isolated, strategically valuable, but distant.

Inside One Nation leader Pauline Hanson's night from hell https://t.co/TymvSAf2QH via @smh

What we were effectively seeing was the denuding of a considerable percentage of Queensland votes – some 14 percent, or 290,000 voters, who had pitched for a party and hold at best, the possibility of one seat in the legislature.

It was the continuing rhetoric of the political orthodox priests, the same, and dangerous labelling of the “basket of deplorables” used by Hillary Clinton in the U.S. presidential elections to delegitimise the concerns of Trump supporters.  By all means, vote for One Nation, but expect no political voice, no partnership, no coalition of interests. One Nation remains feared, bothering and to be boxed.

The same denuding could also be said of the Green vote. The party leadership had every reason to be happy with various performances in Brisbane proper, but were still assessing their outcomes with cricket-like amiability. Their performance would surely warrant more than one seat through the state, but preferential voting again meant that a Greens voter was more likely to prop up a Labor candidate than advance his or her first preference.

Such results should actually concern the major parties, who persist in believing that they have been savaged by dead sheep rather than enthusiastic jackals. The Premier has taken it in her stride, as much as an article of faith as anything else, insisting that “we will be able to form a majority Labor government once all the votes are counted.”

The response from Tim Nicholls of the LNP is more cautious, sensing that his performance was hardly a ringing endorsement of conservative government:

“Queenslanders have not responded to Labor and the union movements’ scare campaign or their demand for a majority or nothing else.”

As counting resumes, and over the next few days, Queensland’s seemingly muddled voice (Green calls it “wacky”) will have a constructive silver lining: effective government need not entail parties beyond oversight, powerful groups passing legislation beyond debate. To get supply and tpass bills, may entail something the establishment political parties have an aversion towards —  compromise.

Dr Binoy Kampmark was a Commonwealth Scholar at Selwyn College, Cambridge and lectures at RMIT University, Melbourne. You can follow Dr Kampmark on Twitter @bkampmark.

Behind in Gaven vote, LNP candidate Sid Cramp is now scrutineering his own recount, in breach of @ECQInfo rules. Complaint made. pic.twitter.com/kzCQmyULnM