The cruel myth of trickle down economics

When the rich demand bailouts, as they call the unemployed 'parasites', then there is something wrong with the society. Dave Johnson reports from a fractured United States.

Can you feel it trickle down? 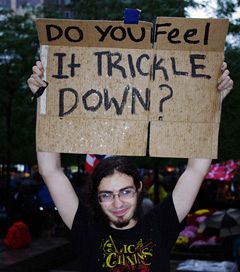 Cruel language justifying extreme greed seems to be mainstream now. Even US presidential candidates feel free to disparage 99% of us! In today's right-wing folklore, government by ‘We, the People’ is an evil thing that takes from "producers" and gives to "moochers", "freeloaders" and "losers". Government and taxes "take money out of the economy". Decision-making by ‘We, the People’ is "collectivism" and "mob rule". And those of us who think the insanely wealthy should pay fair taxes suffer from "envy".

In today's discourse, wealthy elites receiving $20 million a year in “capital gains”, while paying almost no taxes, are “producers” — while janitors or nursing home workers, working two jobs and not making enough to pay rent and feed themselves, are “moochers” and “freeloaders.”

This email came in to CAF recently (see also Richard Eskow's take on it, John Galt Is A Crybaby And So Are You):

‘I am really curious to know what motivates the mind of a socialist. Why do you think it’s fair to penalize those of us who produce while rewarding those who do not? If healthcare should be a right then where does it stop?

‘Could one not use the same argument that everyone has a right to free housing? A free car? Perhaps free air travel? Who will pay for all this?

‘What happens when the government has exhausted the money acquired from the producers? I have a feeling producers will stop producing if the government is just going to take it. Again, I ask why should the people who produced be punished to reward freeloaders.’

Actually, if you ask me, a right to housing, health care and decent transportation sound like the kind of things that proud citizens in a democracy ought to demand.

This email and others like it echo the language of the novels of Ayn Rand, which so many Republican politicians today embrace. The people writing these emails are disciples of Ayn Rand. They used to be teenagers who resented being told to clean their rooms — now they are grownups who don’t want to be told to pay their taxes. Republicans have enthusiastically embraced the poison of Ayn Rand, its justification of psychopathic greed and selfishness, along with her belief that altruism and democracy are "evil."

This Ayn-Randian idea that there are two kinds of people, "producers" and "parasites," is reflected across the language of the right today.

The wealthy "producers" are "job creators" US Republican Speaker of the House John Boehner, for example, regularly echoes this core philosophy of "producers" and "parasites", saying:

“I believe raising taxes on the very people that we expect to reinvest in our economy and to hire people is the wrong idea. For those people to give that money to the Government…means it won’t get reinvested in our economy at a time when we’re trying to create jobs.”

"The very people" who "hire people" shouldn't have to pay taxes because that money is then taken out of the productive economy and just given to the parasites – "the help" – meaning you and me.

Who Is The Real Freeloader?

With the release of his (but for some reason only the most recent) tax returns, we learned that Mitt Romney collects over $20 million a year, while doing nothing, from the many millions he was able to get control of by stripping companies and laying people off or making them take huge pay cuts and loss of benefits.

According to the Christian Science Monitor titled, ‘What kind of society does America want?’, this is the story of what happened to the workers in one company when the Romney/Bain machine "came to town":

‘The new owner, American Pad & Paper, owned in turn by [Mitt Romney's] Bain Capital, told all 258 union workers they were fired, in a cost-cutting move. Security guards hustled them out of the building. They would be able to reapply for their jobs, at lesser wages and benefits, but not all would be rehired.’

According to the cruel language of the right, those workers are "losers." If they need to get unemployment or food stamps they are "parasites" and "freeloaders" who are "asking for handouts." When old, they will need the Social Security and Medicare they paid into all their lives, more "handouts." People like Romney says these "entitlements" – the things we are entitled to as citizens in a democracy – are "draining the economy."

Mitt Romney says government is the culprit, not people like him who show up and strip our jobs, factories, companies, industries and economy. Romney, who pays very little in taxes on the $20-plus million he receives in "capital gains" every year, wrote in a December USA Today op-ed titled, What kind of society does America want? that the very existence of government itself costs the economy jobs, writing, "With the growth of government has come an inevitable contraction of the private sphere." Romney writes that programs like Social Security and Medicare are examples of "government dependency." And, finally, he writes, "Government dependency can only foster passivity and sloth".

Right. Mitt Romney, producer – who receives $20-plus million a year for not working – as contrasted with the "losers" who work two jobs at minimum wage, making so little they need food stamps just to get by. (They used to make more, but Mitt Romney came to town, buying the company they worked for, chopping it up and sending the parts they don't sell to China, laying them off or cutting their wages in half, and taking their health care and pension.)

The conservative Heritage Foundation has published an "Index of Dependence on Government", saying we have "unsustainable increases in dependent populations". Heritage writes that, "Americans are haunted by the spectre of enormously growing mountains of debt that suck the economic and social vitality out of this country."

Heritage fails to mention that we were paying off the nation's debt before Bush's tax cuts for the wealthy. In fact, at the rate we were paying off the debt when Clinton was President the entire US debt would have been paid off by now. Except for those tax cuts for the wealthy. But, according to Heritage, the problem is not wealthy people paying very low taxes — it is humans with human needs that are a "a potentially ruinous drain on federal finances".

It is the Romneys, getting their $20-million-plus checks for doing nothing – the "gains" from stripping our economy and sending our jobs to China – who are dependent. Not the people that the Romneys threw out of work or cut their pay in half. Not the people working two jobs, yet not making enough to pay rent and get enough to eat. The real "producers" in our economy are the 99% – the people who work – not the1%er "parasites" who use their wealth and power and connections to game the system and reap vast "gains".

(Dave Johnson is a Fellow at Campaign for America's Future, writing about American manufacturing, trade and economic/industrial policy. He is also a Senior Fellow with Renew California. Dave has more than 20 years of technology industry experience including positions as CEO and VP of marketing. His earlier career included technical positions, including video game design at Atari and Imagic. And he was a pioneer in design and development of productivity and educational applications of personal computers. More recently he helped co-found a company developing desktop systems to validate carbon trading in the US. This story was published on Truthout on 9 February 2012 and has been republished under a Creative Commons licence.)