The contemptible foes of an Australian adornment

Former Prime Minister Julia Gillard was an adornment to Australian politics and did not deserve such shabby treatment from her contemptible foes, says senior correspondent Barry Everingham. 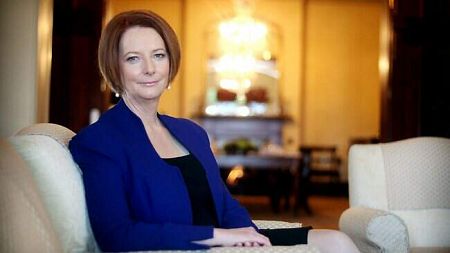 My heart bleeds for the likes of Alan Jones, Andrew Bolt, the two Bishop girls, the dreadful Sophie Mirabella, Christopher Pyne and those politically blinkered political watchers who failed to see what an adornment Julia Gillard was ‒ and indeed remains ‒ to Australia.

The hatred and bile heaped on Australia’s first female Prime Minister was nothing short of disgusting and was unique in Australia’s history — as well as relentless.

Alan Jones’ “her father died of shame” remarks beggared belief; that is, unless one had read Chris Master’s epic unveiling of what Jones was all about in the biography Jonestown.

For readers who have any doubts about Jones, make a beeline to the local library and grab a copy.

Andrew Bolt is bad enough, but his habits are those of a real bloke — it’s just his politics stink.

Now, back to the women.

It was really scary to see the hatred in the eyes of Julie Bishop, Bronwyn Bishop and Sophie Mirabella when in question time they asked a question of the former Prime Minister Gillard.

As the questions worsened, Tony Abbott’s sneering  became more pronounced and it caused Pyne to sink to depths which, even for him, reached a new low.

Who will ever forget Bronwyn Bishop’s unbelievable response to the “father’s shame” remark?

Sneering across the table, she screamed:

And the vision of the Liberals standing under the “ditch the bitch” sign will forever be engraved on the psyche of Australian politics.

Bronwyn and Mirabella were always open to remind Australia that not only was Julia single ‒ horror of horrors! ‒ she had a live-in boyfriend.

They were canny enough not to drag Julie Bishop into that one — she, too, is single, childless and the name of her latest boyfriend escapes me right now.

Christopher Pyne is so low rent, it makes one wonder what yard stick South Australian Liberals in use in selecting candidates.

Up north in Queensland, it’s a case of watch this space — IA hasn’t even gotten started on Mal Brough, Chris Pyne and Joe Hockey yet ‒ all of whom it seems are up to their necks in Ashbygate ‒ but, as I said, “watch this space”.

Julie Gillard, right up to the end, kept Tony Abbott at bay and it should never be forgotten that she lifted dignity to new heights, by ensuring that whoever lost the leadership would vacate the Parliament so the victor had a clear run.

The entire fabric of a fair and decent Australia would be trashed under an Abbott government.

We deserve better than a man who is a policy free zone, who takes his orders from George Pell and the faceless men who inhabit the top end of town, along  with the octogenarian US citizen who sold his Australian passport for financial gain.