The biblical fall of Bibi Netanyahu

If political machinations turn out as Bob Ellis expects, the reign of terror of Israel's Bibi Netanyahu will soon be over. 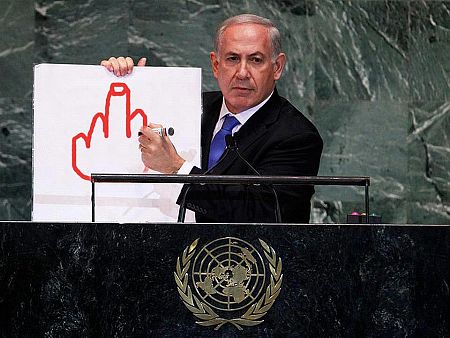 IT IS PROBABLE, but not certain, that forebodings by Chuck Hagel, the likely new Secretary of State in the second Obama administration, will speed Bibi Netanyahu out of the Likud leadership and install another in his place. Bibi cannot be trusted, Hagel will reason, to keep his word on anything, and he is keen, moreover, to wage nuclear war on Iran, and we are not.

And, more than that, he poisoned the Hamas leader Khaled Mashaal in 1998, and no peace with Gaza is possible while both lead their separate countries; and it will be shown pretty soon Bibi poisoned, or ordered poisoned, probably, Yasser Arafat, the Nobel Peace Prize winner, as well, and he may soon go to gaol for it, if he is captured travelling outside Israel, as he tends to be in any month.

His party deputy Avigdor Lieberman, moreover, will go to gaol before him, on corruption charges he is currently, feebly denying, probably, and this will bring the numbers of the right versus the left in the Knesset back to 59-60; the left ahead by one – only one – but in the majority, this month anyway.

This means Bibi has lost the election; and, though it may take a year for it all to work through the system (my pick is two months), Yair Lapid, or, at an outside chance, Tzipi Livni, or a resurrected Ehud Barak, or even the unabashed octogenerian Shimon Peres, or another person not yet thought remarkable, heroic or foredoomed, will be Prime Minister of a Grand Coalition Government by April 2014, and a two-state solution will be in place by the end of 2015.

This will occur if my view of Hagel, Kerry, Obama, Hague, Hollande, and the ever-more influential Bob Carr is right — and money will be cut off in significant amounts if a two-state agreement is not enacted. And things, in short, are not as they were, old friend, four days ago. Four days ago, Netanyahu was odds-on favourite.

And historians looking back at recent Middle Eastern events will judge I think the cause of Bibi’s fall to be twofold — both of these in October, 2012.

One was his participation in an election ad for Mitt Romney. And the other was his war in Gaza, in which forty-seven children were killed, sometimes at 4 a.m., for the capital crime of sleeping in their own beds in apartment blocks which Bibi ordered bombed. These acts were so like war crimes, so baseless, senseless, murderous, cruel and foolish, that all the many friends he once had in the State Department were lost to him, including a number of Jews, and he thereafter stood – poor Bibi – in the biblical phrase, ‘naked among mine enemies’.

Biblical echoes punctuate — of course they do — this righteous lunkhead’s long, mad story.

Rabin ordered the Entebbe raid in which Joni Netanyahu, Bibi’s adored brave brother, died. Bibi, then, as Likud leader, stood against Yitzhak Rabin, his brother’s killer, and Rabin was murdered by a convenient fanatic, and succeeded by the timorous Shimon Peres, whom Bibi deposed as Prime Minister by the tiniest sliver of a vote, by one half of one per cent.

As Prime Minister, he ordered then the poisoning of Mashaal, and this was accomplished (as last night’s al Jazeera documentary chillingly showed); but King Hussein of Jordan, himself at death’s door from cancer, threatened war if Bibi did not provide the antidote. And, lo, it was provided, and Mashaal saved, and is lately installed in Gaza, proposing the immolation of Israel if Bibi rules it.

And Peres, now President, has the right to sack him or refuse, this week, his claim to office, and so it goes. And the ghosts of Joni, and Rabin, and Arafat, whom he also poisoned, probably, urge the story on.

It is hard to think of a grander tale, or a more magnetic, more repulsive anti-hero.

And it is not over yet.