Australia has exploited international students by reaping the benefits of their economic contribution before locking them out of the country during the pandemic, writes Hayden O'Connor.

SINCE COVID-19 BEGAN, our international students have been neglected and exploited by the Federal Government. Despite contributing $40 billion to Australia’s economy annually, our international students were not eligible for Jobseeker and were essentially forced home by Prime Minister Scott Morrison last year. These students are still unable to enter Australia to resume their studies or commence post-study work visa employment.

I’ve spoken with more than 20 of our international students who are currently stuck overseas. They’ve been ignored by our Government and they want answers. Post-study work visas are going to waste. Full priced tuition fees are providing a sub-par online learning experience. Some overseas students are still paying bills in Australia, such as rent or health insurance. Most importantly, the Government is yet to provide any advice as to when students can return to Australia.

Of course, with many Australian citizens still trying to get home, the argument for opening the international student floodgate would fall on deaf ears with many Australians. That’s fair enough, of course, and the majority of international students aren’t asking to be prioritised, most just want clarification and a timeline, but so far the Government has only given students the silent treatment.

Governments need to plan for the long term economic impact of the coronavirus pandemic on the International Education industry.

Australia should compensate the 164,000 students who have paid for visas and tuition fees that they simply can’t use. Due to time zones, internet issues and the absence of interaction with other students, the online study option is simply insulting given the high cost that international students pay in tuition fees.

The Government should accept that these students aren’t receiving what they paid for and organise a discount of their tuition fees. As universities are prepared to pay whatever it takes on flights, quarantine and logistics to facilitate the return of international students, it is fitting that the Federal Government foots the bill for tuition discounts as it’s their policies that are preventing students from returning.

For students who have deferred their studies, the Government is waiving their visa fees should they require a new visa to complete their studies. Whilst this is welcomed, it begs the question — why can’t the Government simply extend all student visas by the duration of the border closure?

The decision not to provide an extension for post-study work visas is a real slap in the face for the students who have paid tuition fees, worked part-time whilst completing their studies, contributed to our society and then paid for a post-study visa which they can’t actually use. These students have put in the hard work and now they can’t reap the rewards. Scott Morrison's “if you have a go, you’ll get a go” slogan appears to be nothing more than rhetoric. 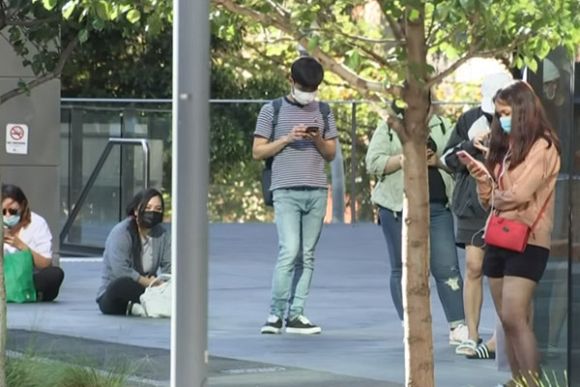 I spoke with Saad Ahmad, who completed his Bachelor’s Degree in Professional Accounting in 2019 and is in this exact situation:

“Our 485 visas are just getting wasted. We are requesting the Government to at least extend the visas for those who are stuck offshore because it's a once in a lifetime opportunity.”

The complete disregard for international students has seen many take to social media to vent their frustration with our Government. At one point, #LetusBackToAus was trending with 105,000 tweets on Twitter. If the Government doesn’t leap into action, Australia will risk losing these students to other countries. For students who have not yet paid their tuition and visa fees, this is already happening.

The Government’s neglect and exploitation of students is also threatening our ability to retain future talent after they complete their degrees, with Eva Midtgaard stating:

“The longer I am kept outside of Australia, forced to live life in limbo, the less likely it is I will choose to stay and contribute to the Australian society once I graduate from my PhD.”

Eva’s PhD is in Financial Modelling. Previously, she worked for the London Stock Exchange Group before commencing her research degree. Her qualifications, skills and experience make Eva precisely the type of academic talent that Australia actively looks to recruit, but currently, we risk losing her talents to another country.

If international students aren’t appropriately compensated, it suggests that the Government sees them purely as a cash cow which can be ignored once they’ve handed over their money. Word of this exploitation and neglect is spreading and if Australia isn’t careful, we might find ourselves with significantly less international students to exploit in the future.