SUBSCRIBE   DONATE LOGIN SHOP
SUBSCRIBE   DONATE
ELECTION LIVESTREAM: Time for toast! Murdoch-free analysis
What to do if you spot conspiracists at the voting booth
Shop IA merchandise!
12 reasons why the Morrison Government should be ‘toast’
Independent Australia needs YOU!
Politics

It is well known that Coalition education minister-elect Christopher Pyne drank and talked with James Ashby in Peter Slipper's parliamentary office for hours — but what did they discuss? The Ashbygate Trust reveals.

IF CHRISTOPHER PYNE did have an affair with James Ashby ‒ and we note he has not denied this despite our emailed request to him ‒ then he joins a conga line of saps.

Chris will, of course, recall his meeting with James in the Speaker’s office on 19 March 2012.

There was a witness there. In fact, it might come as something of a surprise that there could have been more than one. Chris is not known for his quiet voice and the rollicking tones of Chris and James with a few beers under their belts attracted quite some attention.

Our witness says the conversation between Chris and James took a ‒ how shall we say ‒ a certain turn.

Our witness assures us they are prepared to go to court to state the truth.

"I have nothing to hide," Mr Pyne said. "I was simply passing the time of day. We had a beer and a political discussion."

According to Ms Wright:

Two separate sources have confirmed details of the meeting to the National Times. Both insist Mr Pyne rang back later the same evening to request Mr Ashby's mobile phone number. 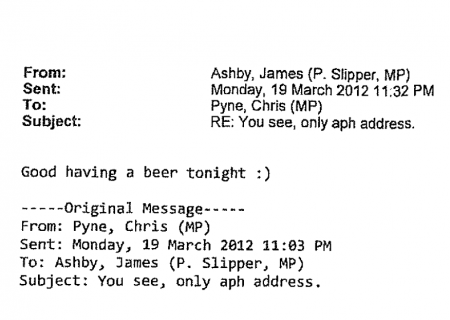 Pyne emailed for a reason.

The discussion between Pyne and Ashby, we understand, included some commentary on the size of a National Party candidate’s member — and we’re not talking MP. (It was impressive apparently.)

Usually, what two blokes choose to talk about over a few beers is their business — but it becomes everyone’s business when affairs of state are drawn into it.

“The whole thing has been a disgusting and concerted attempt to use the spectre of gay sex as a damaging slime trail, for political advantage.

Opposition Leader Tony Abbott says Slipper’s texts are vile and derogatory and make him unfit to be the Speaker who adjudicating over Parliament. The text calling Sophie Mirabella a “botch” [sic] shows a lack of impartiality.

But it was James, of course, who referred to the odious Mirabella as a ‘botch’ and Slipper was merely replying — but when you’re the Boltster, who cares?

Abbott knew enough to comment on the texts back in October 2012, but he didn’t bother to read Rares’ decision of 12 December 2012, because Abbott, as Judith Ireland wrote in the SMH on 19 December 2012:

…says he has not read the week-old judgment of the Peter Slipper case because he has been doing "very important things for the people of Australia" in Britain.

Hanging out with Alan Jones, well, that wouldbe important.

Maybe he just doesn’t want to read Rares’ conclusions regarding the walking by-election that is Mal Brough.

The Ashbygate Theatre is like any other — main cast, supporting actors, backstage crew … Oh, and a director.

And a producer for the bucks.

As for the main cast and supporting actors, they’re all out there in the texts that James so thoughtfully supplied to the court. The texts are a movie script for public consumption.

But why submit this script at all?

Why supply evidence that ropes in Mal Brough, trashes the reputation of his ally and former colleague Karen Doane, implicates his so-called mentor Mark McCardle and his boss Bruce McIver, hangs Steve Lewis out to dry, gives out the inner workings of his various affairs and names and ...? We could go on.

Why would anybody do that?

Why would they do that, when the whole charade is so obviously so transparent?

Well, because it’s not.

Back to you Chris — and our earlier sap comment. You’re obviously a smart guy, but if you did have an affair with James, good luck. 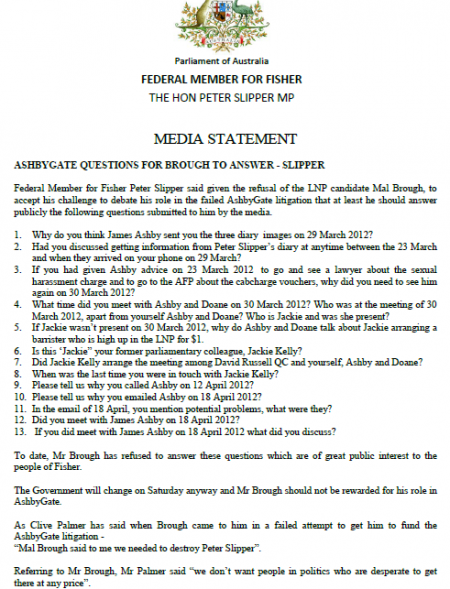