The Ashbygate Theatre: Changing the script

Why did James Ashby give two entirely different accounts of how he met Peter Slipper in his court documents? Which is a lie and which is true — if any? The Ashbygate Trust investigates.

AT THE HEART of the Ashbygate matter is the question — was James Ashby ‘sent’ to Slipper as part of a plot to force the latter from Parliament? Or does he just like playing with hand grenades?

To arrive at the answer, we must determine how they met.

That is not as easy as it sounds.

It must have been busy at the Harmers Workplace Lawyers' office leading up to James’ Fair Work hearing. We say that, because they seem to have inadvertently lodged a stray document.

They may come to wish they had been more careful.

In all the reams of stuff tendered to the court, there are two statements by James. Both are dated 13 April 2012, both are signed by the same hands. One is stamped 'File Received by the Federal Court', one is not. One has a file number assigned:

The other is blank:

They give different versions of many things, including how Peter met James.

Witness evidence too is contradictory, as we shall see.

Here is an excerpt from the stamped statement: 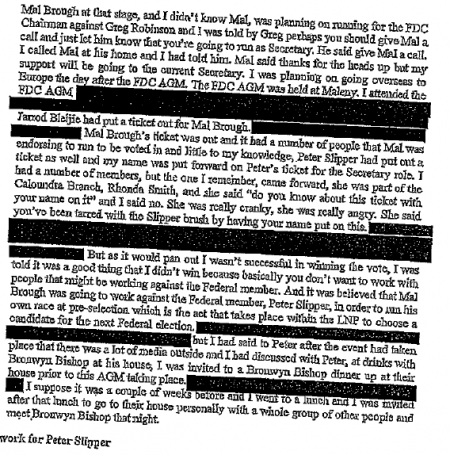 If you understand the tangled syntax of the last bit then you’re better than us.

And this from the unstamped version: 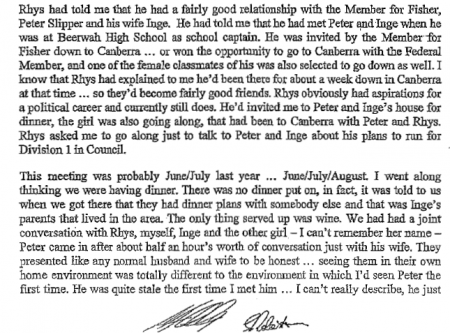 That is a completely different story.

Our investigator met with Rhys Reynolds and took notes. A subsequent email with Rhys confirmed those notes were accurate. Here is an extract from those notes:


Have spoken to many media re the Ashby matter and have always simply told the truth. No animosity towards Slippers.

Became a candidate for local council elections in May 2011. Met James at about this time at Gowinta farms. Gowinta one of the largest employers in the area and attended regarding campaigning. At Gowinta to attend a meet the candidates meeting. James offered to provide support. That was the first meeting with James.

James had a digital and print background and offered to provide support in this regard, design of flyers etc. Began having regular coffees and chats, became friends. Understand James offered the same media services to other candidates as well. A great guy and good friend.

Prior to running as a candidate worked in Slipper’s office on a part-time basis couple of days a week. Studying PR at USC at the time.

Stopped working with Slipper when announced candidacy, thought it inappropriate for candidate to be working in federal member’s office. Also because of time constraints and not financially viable.

Unsuccessful in election, went to Gold Coast with partner for a week after loss.

Thought James would enjoy meeting Slipper and Bishop and asked Slipper is ok to bring friend. Called James and invited him to accompany me. After some thought James agreed - it was a rainy night. James definitely did not ask to accompany.

Evening a success and James networked.

It's usual for witnesses to have slightly muddled memories, so often any story can have several interpretations, but James’ statements were made on the same day and signed by the same witness. There can’t have been lunch between them.

Rhys has a photo of Bronny as his phone photo, so you’d think he’d recall the circumstances of a momentous night spent in her presence — a rare treat.

The Slippers’ are a bit vague about the timing of their first meeting with James. But they have a clear recollection of the circumstances. They believe it was May 2011, probably the last week, when Rhys asked if he could bring his ‘campaign manager’ over to meet Peter and they could all discuss strategy ideas. Slipper, who held Rhys in high regard, agreed. James and Rhys then attended the Slipper residence.

That closely corresponds to the version in the unstamped statement — except according to the Slippers, Rhys went down and back to Canberra on the same day.

Bronwyn Bishop was at Gowinta on 29 July 2011 and attended the cocktail function held in her honour at the Slipper’s that evening.  The Glasshouse FDC AGM was held on 3 September 2011.

So there is no clear answer as to the circumstances or timing of the first substantive meeting between Slipper and Ashby, but a good working hypothesis is that Rhys did introduce his ‘campaign manager’ to Slipper in or around late May 2011 and that Rhys and James then both attended the Bishop do at the end of July 2011.

But that begs the question — why are there two statements anyway? And why are they so contradictory?

The contradiction theme is continued in other sections of the two narratives. How James felt about taking the job with Slipper for example.

In the stamped statement he is torn:

But in the unstamped, he is "rapt":

If you have a bit of time and enjoy a good document, have a read of the two statements yourself. The contradictions will come up again.

Why did James Ashby feel the need to tender such radically different accounts of these same events on the same day? Why did he change his story? Was it at the request of his lawyers? Some other party?

But back to the original questions. Was Ashby sent or did he decide to cause chaos for his own reasons?

For the moment, the confused evidence suggests no greater mind than James himself engineered his introduction to the world of Peter Slipper.

But he knew what he was doing.

James always knows what he is doing.

We understand why you’d like to see more hard evidence regarding some of the points raised in the Ashbygate Trust articles. We ask for your patience here as publishing detailed evidence now could compromise our efforts. We go to great pains to ensure our facts are right before publishing. But there will be more to come over the next few days. Keep watching this space.