If Mal Brough wins Peter Slipper's seat of Fisher, his tenure is likely to be brief, says the Ashbygate Trust, who expose more of the plot to bring down the former Speaker.

IF MAL BROUGH wins Fisher, his parliamentary rebirth will be short-lived and ugly.

Evidence of his role in the Ashby matter is becoming overwhelming. There’s the damning texts, of course, that led Justice Rares to his conclusion that Brough, Doane and Ashby colluded. But there is more.

On 13 June 2013, our investigator was driving down the M1 from Beerwah on the Sunshine Coast, heading for Brisbane, when he received a call from James. It sounded, said our man, like a fishing expedition.

Earlier that day, our investigator had met with the chair of Beerwah LNP branch, Val Bradford. In this meeting, Mrs Bradford advised our investigator she and James were close friends. They first met at the café at Gowinta Farms where James was PR manager at the time and he impressed her so much she invited him to join the Beerwah LNP. By the time of his resignation to join Team Slipper, James had risen to vice-chair of the branch. Mrs Bradford said she loved James like a son. She still does.

She was, then, naturally upset when James showed her text messages from Peter Slipper and he explained to her how threatened he felt by Slippers’ apparent advances. According to Mrs Bradford, James appeared stressed and pale as he told her the story.

James sought Mrs Bradford’s advice regarding who in the LNP he could speak to about the matter and suggested the appropriate qualifications for such a person would be someone a) not in the parliamentary party, but b) someone who had been in parliament and was aware of the various regulations. Mrs Bradford could think of only one person who fitted this brief, endorsed Fisher LNP candidate and former Howard Government minister, Mal Brough. Mrs Bradford believes James had not met Brough before this time — presumably an impression encouraged by James.

On 4 May 2012, the Australian published a story on Mal Brough written by its Queensland political editor Michael McKenna. Regarding Mrs Bradford, the article stated:

"In early March, James came back to town and he wanted to talk to someone who knew about the parliamentary processes and what could be done. He didn't want to talk to an MP, and we talked, and I could only think of Mal Brough."

On the eve of Queensland's March 24 election, Mr Brough said he had received a telephone call from Mr Ashby, asking to meet him. Mr Brough said he was suspicious of Mr Ashby, because he was a staffer of his political rival and a party member who had unsuccessfully run for election as an LNP official last year against Mr Brough's own team, which eventually took over the branch.

The former MP, who lost the neighbouring seat of Longman in the 2007 federal election, said he had relented and agreed to meet Mr Ashby on March 23.

Brough would remember the date of an election eve — that’s not one of those dates you clutch for. So when he said the 23rd, he was definite.

That means Ashby and Brough had met six days before James reverse-engineered his alleged introduction to Brough via an unwitting Mrs Bradford.

Mrs Bradford is adamant James had not previously met Brough and firmly believes it was she who caused Ashby to consult Brough, but

Your conclusions are as good as ours.

But what is the crime here?

Attempted insurance fraud might be a good start. Who knows how much a payout to Ashby might have been if his claim had got up? He’s already got $50k from the Federal Government. Not enough to make him go away apparently, so we can only surmise the plotters and Harmers were hoping for a solid drink as a handy reward for their work.

It gets worse for Mal.

The human sideshow that is Clive Palmer has dumped a bucket on him big time. Mining Magnate v Mendicant Mal. It appears their amusing game of ‘who’s a liar’ will have its final round in court – our money’s on Clive – but it obscures a greater matter — the involvement of Joe Hockey.

Ashbygate investigator Vince O’Grady has tracked Hockey’s movements at Coolum and advised the Trust there were only three possible days Brough and Hockey could have met with Clive — 1, 2 & 3 April 2012.

Then we tend to believe him. We have spoken to Swan and he stands by his report.

In his latest outing on the matter, Clive took on Emma Alberici on ABC Lateline. Clive alleged Brough asked him point blank to fund the Ashby legal fees.

According to Clive, Brough said:

"We want you to give us the money and fund it."

Because at that stage, I think, Peter Slipper was relevant in the balance of power in this country and I said, well, I'm not prepared to fund anyone's campaign.

And he said: "Can I explain it more to you?"

And he explained it to me and I took the judgment that it was basically made up — it was done for political purposes, and it was hearsay and I wanted nothing to do with it.

We think. The man is a mining magnate about to run for PM.

The Lateline transcript goes on:

And as we were concluding the conversation, Joe Hockey went past because he was staying at the resort with his family. He sat down and we had a cup of coffee. At no time did Joe Hockey even discuss this issue and he was...

The interviewer, Emma Alberici, interrupts him at this point:

Did you discuss it with him? Did you mention it to him?

Interestingly, Palmer does not entirely dismiss the proposition Hockey was there for the Ashby discussion [IA emphasis]:

To Joe Hockey? I don't recall. I don't think I did but certainly not this issue. He just sat down and had a cup of coffee and then he went. On the last day of Parliament just recently Peter Slipper attacked Joe Hockey for being part of a conspiracy. And that just wasn't true. The only discussion I had was with Mal Brough.

So we are asked to believe that Mal ‒ who has a background as a salesman repping hair care products on the Sunny Coast, a man who had just asked Clive if he could explain ‘it’ more ‒ a bloke who is trained to close even tiny shampoo deals, just stops talking when Joe ambles in for a coffee? Note also, Clive initially said he and Mal were "having a drink" but, miraculously, coffee appeared when Joe turned up and the Ashby funding conversation abruptly ceased. He thinks.

When you go to a car yard and the salesman is having a few problems closing you on unnecessary rust protection, standard operating procedure is to call in the sales manager.

Again, we will let you to draw your own conclusions.

In a bizarre twist, James Ashby’s parents have challenged Peter Slipper to a debate in the streets of Beerwah. Slipper had initially challenged Mal to a debate, but Mal, being Mal, did not respond. So James’ parents have stepped up. They allege, with all gravity, that the term 'Ashbygate' is slight on the whole family. They appear to be serious. 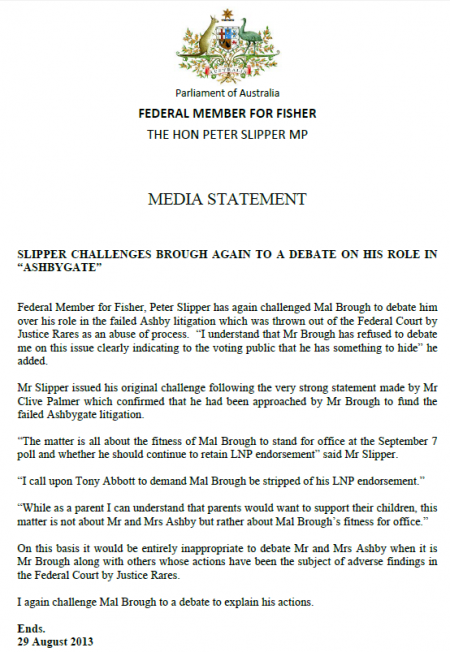 For those wondering about Christopher Pyne, the disappearing staffer and the legal opinion about whether Mal Brough has committed a crime in getting Ashby and Doane to copy Slipper's private diary and pass it on to Murdoch employee Steve Lewis, keep watching this space — there's more coming very soon.