The Ashby raid and the potential charges

The AFP warrant served on James Ashby signals the beginning of the end of the saga that is Ashbygate, a plot hatched deep inside Liberal HQ to sacrifice Australian democracy for its own twisted ends.

It is a cluster bomb with the power to rearrange Australian politics.

The warrant alleges Malcolm Thomas Brough, James Hunter Ashby, Karen Lynette Doane and Steve (no middle name) Lewis were all in breach of either the Crimes Act 1914 or Criminal Code of 1995. Or both.

Let’s start with Lewis and his then employer, News Ltd. It can be proven News paid for at least Ashby’s accommodation while he was in Sydney -

From the new Ashbygate book:

James was up bright and early on the morning of Wednesday 11 April, ready for a big day.

'Hi Steve. Do u want me to check out before I leave for the lawyers or am staying another night in the same place?'

[Lewis replied:] 'Hi mate No stay another night OK? I will sort out paymeent etc Just tell hotel to book u in again and News will sort'

If it can be proven that Ashby, a Commonwealth official, had benefited from or was influenced by these payments to leak details of Slipper’s diary, that would be a breach of Section 142.1(1) of the Criminal Code 1995 which is concerned with;

'141.1  Bribery of a Commonwealth public official'

If found guilty, Lewis could face up to 5 years in prison.

I spoke with Steve Lewis this afternoon. He reckons he hadn’t seen the warrant, just read about it. I offered to read it to him. He said he was in a meeting and was busy. I wished him luck.

It could cramp News’ style as well. While it is not mentioned in the warrant, Lewis’ phrase ‘News will sort’ makes it  seem pretty clear what happened.

If found guilty, a corporation can be fined 10% of its turnover for the year following the offence. That would hurt. 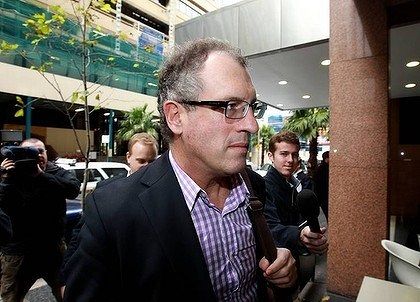 The warrant also alleges Ashby was in breach of the Crimes Act 1914 when he gave extracts of Slipper’s diary to ‘third parties without authority’. Section 70 concerns unauthorised disclosure by public officers. Penalty? Two years in a green t-shirt.

The warrant also alleges Ashby was in breach of Section 478.1 of the Criminal Code 1995 when he accessed data in Slipper’s diary without authorisation. That would be another two.

I tried calling James a few times, but my calls went straight through to the keeper.

Karen could also be playing the lead role in her own personal version of Prisoner if she goes down for breaching S70 of the Crimes Act 1914 when she passed on Slipper’s diary information without authority.

And that brings us to Malcolm Thomas Brough, accused by the AFP of counselling and procuring Ashby to both access restricted data and to disclose diary extracts.

I can't fault Mal Brough for his involvement in my case. A morally strong bloke regardless of media accusations. #Auspol #MalBrough

'A person who aids, abets, counsels or procures the commission of an offence by another person is taken to have committed that offence and is punishable accordingly.'

All up, maybe four years.

Blind optimism I know, but if this warrant leads to formal charges and, thence, to convictions, it will change the landscape.

Now the MSM are so over the shock of the AFP Ashby raid they’ve buried it. I reside in NSW and have heard nothing today on any news bulletin, nothing in the print Sydney Morning Herald, no mention in the Rupert local comic strip, the Daily Telegraph.

But no matter, things are moving along fine.

Ross Jones is author of the new book 'ASHBYGATE: THE PLOT TO DESTROY AUSTRALIA'S SPEAKER', which can be ordered HERE and also via selected independent bookstores.

ASHBYGATE will be officially launched at 10.30 am, 10 December 2015 at the Shearwater Resort, 79 Edmund Street, Caloundra. All are welcome.

Want to get up to date with #Ashbygate? We wrote the book! Still a few signed copies available from the IA store. https://t.co/RFUjdg6R70

In case you missed it last night, IA's analysis of the AFP's dramatic raid on James Ashby yesterday. https://t.co/chdkVPXlew