The Liberal Party and their media allies are spinning out of control, alleging a Government cover-up over Peter Slipper. In a forensic analysis of the case, Vince O’Grady shows that, if anything, the reverse is true.

He starts off his article with a test:

'How long does it take to deduce whether the following text messages are sexual and in poor taste.'

He goes on to say:

‘It takes about eight seconds to read these messages. Confronted with DOZENS of similar messages it would have taken less than a minute to realise that the former speaker of the house, Peter Slipper, sent numerous lurid, unsolicited sexual messages to a STAFF member. Which means the Attorney-General, Nicola Roxon, has a problem.' [Emphasis mine.]

Here are some of these facts, backed up by actual proof (as found in the publicly accessible court documents):

1. James Ashby made complaints about Peter Slipper to the Federal court of Australia on 20 April 2012.

3. James Ashby was offered a job by Peter Slipper as media adviser.
....

12. On or about 27 October 2011, the Second Respondent again offered the Applicant the role. The Applicant again declined the offer.

4. Ashby accepts a job as an advisor to Slipper.

13. By letter dated 5 December 2011 the Second Respondent later offered the Applicant employment as an Adviser on his personal staff as an ongoing employee, to be employed as a Personal Employee under Part III of the Members of Parliament (Staff) Act 1984.

14. The Applicant accepted the position and commenced employment on or about 22 December 2011. The role involved work both in the Electorate Office in Queensland and in Canberra.

The four messages referred to by Sheehan were private messages between two adults. They were sent by Slipper to Ashby (remember, this is Ashby’s phone records we are looking at here) as follows:

Lets refer back to the facts.

When these messages were sent and received, they were the private correspondence between two individuals and have no relation to the sexual harassment charges specified in the complaint because they also fall outside of those dates.

Ashby was not employed by Slipper when those messages were sent ― so there can have been no sexual harassment at that time.

Whilst the content of the text messages may be seen by some as offensive, the test for offense is whether or not the person was actually offended. In between messages 10078 and 10080 is message 10079; the sequence reads as follows:

The texts then go onto show more strategising about how they can get Mal Brough. In fact, the original language was about Brough ― neither Ashby or Slipper liked him (at least according to the texts).

I will leave you to make up your own mind as to whether Ashby was, in fact, offended by the vile language used in the texts by Slipper.

But how does this all add up to Nicola Roxon having a problem?

Well, the argument is that she knew about the vile and disgusting texts on June 9th, when she was briefed.

'...was briefed about the hundreds of dubious and distasteful text messages sent by Slipper to his Staffer James Ashby.'

The only messages germane to the case are those between January and March 2012.

I have counted the relevant messages given in evidence during this time and they start from message #12522 on 1 January and conclude at #14336 on 28 February 2012. They include 691 messages (364  messages in January and 327 in February). Slipper sent Ashby 361 messages out of the 691 messages sent between the pair; that means Ashby sent 330 messages back.

I have closely examined the messages Slipper sent to Ashby and made an evaluation of those that were potentially “dubious and distasteful”. There were 169 messages from Slipper to Ashby in January and 192 messages in February.

After looking through the messages for February, none of them appear to be particularly ‘dubious or distasteful’ ― they were all about his work.

For January, I've found only one message which appears to be distasteful.

12995 on 20/1/12. I quit didn't u hear? Joking. I'm all good. I'm trying to let u have a bit of a holiday. Just had another meeting with TAFE with Karen. Been organizing the forum and we're heading out to drop off growth charts this afternoon. How r u going? [sent by Ashby]

I leave the reader to make the judgement as to whether Ashby was offended by this exchange. Perhaps it would be better if we knew the content of the messages which are missing. One can only speculate.

So, in the month of January, I have only found the one message sequence which could be considered “dubious and distasteful” ― but distasteful to whom? It appears not to Ashby.

There are simply not “hundreds of dubious and distasteful text messages sent by Slipper to his Staffer James Ashby”, as Paul Sheehan asserts.

In fact, Sheehan has gilded the lily and made outrageous accusations which are not supported by the facts. Hundreds are really a couple. Offensive is relative: was Ashby really offended. Judging by the language used by him in other texts to Slipper and others, it seems he had a potty mouth as well. Sheehan then goes on to use the politically motivated hyperbole of Opposition lawyers Eric Abetz and George Brandis to describe the trouble the Attorney-General is meant to be in.

When she was briefed about the text messages on June 9, 2012, the lawyer in her may have taken over, but is this really relevant to the case before the court?

What Paul Sheehan should be concerned about is the reporting of facts.

Peter Slipper is guilty of having a potty text persona ― like many politicians ... and indeed journalists.

At least he had the political courage to own up to his private persona ― a contrast to the journalists and politicians mentioned in this piece.

Methinks they doth protest too much!

That, however, is not all that is intriguing about the case.

In the original complaint, the "First Respondent" is the Commonwealth of Australia.

The complaint says the following:

6. The First Respondent obtained this knowledge via its employee, Mr Tony Nutt, a Senior Adviser to the then Prime Minister, John Howard. Mr Nutt was so informed by Megan Hobson, a former member of the Second Respondent's staff who had viewed a video in which Mr Slipper was observed to:

(a) enter the bedroom of a junior male staff member via the window;

(c) urinate out of the window of the room.

7. Mr Nutt, having been informed of (a) and (b) above by Megan Hobson, directed Megan Hobson to "....forget all about it".

8. The Commonwealth thereafter failed to take reasonable and effective steps to prevent the Second Respondent from utilising his office to foster sexual relationships with young male staff members.

I have the following questions about this:

1. Given James Ashby met Peter Slipper for the first time in 2011, how did he know about alleged behaviour by the member for Fisher in 2003, 8 years previous?

2. If an actual video exists of this incident, then where is it?

3. If this incident really occurred, was there a cover up of Slipper’s behaviour by the Liberals?

4. Where did the information come from about this incident?

What did George Brandis, Tony Nutt and Eric Abetz know about the alleged 2003 incident and did they and the Liberal Party cover it up until it was politically convenient?

I suspect that the only part of Sheehan's article I agree with is the following:

'The political mischief in this case has never been in doubt.'

Much of the political mischief described in the article is contained in his quotes from George Brandis and Eric Abetz.

'These texts, on any view, contain dozens of instances of predatory sexual conduct. So the Attorney-General’s claim that this was merely a vexatious case was extraordinary. Any person who reads the texts would know instantly that Ashby had a case.'

'The government was willing to spent three quarters of a million dollars of taxpayers’ money to cover this up. I’ve never seen the first law officer of the land behave in such a partisan way. She has a lot to answer for and a lot to explain.'

Let me summarise the facts, rather than the deceitful spin promulgated by Sheehan, Brandis, Abetz and others:

1. When the texts which are mentioned at the top of Sheehan’s article were sent, they were not sent to anyone who was employed by Slipper.

3. They were not the subject of the original complaint because they did not fall within the dates specified in the complaint.

4. There were not dozens of instances of predatory sexual conduct.

5. There were not “hundreds of dubious or distasteful text messages sent by Slipper to his staffer James Ashby” ― there were merely a handful. 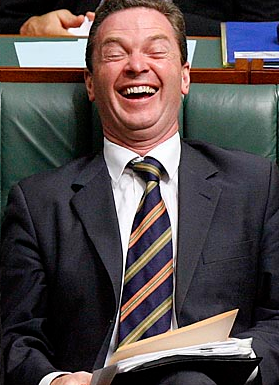 6. If Peter Slipper was involved in an alleged improper incident with a staffer in 2003, someone from the Prime Minister's office (John Howard's) covered it up, only to bring it to Ashby's attention in 2012 for political reasons.

7. James Ashby's legal action is being funded pro bono by Harmer's Workplace Lawyers, as well as a mystery donor from the Liberal Party, who has apparently given him $100,000 worth of legal work for $1. Why?

8. Why wasn’t this complaint handled under the normal procedures for workplace sexual harassment? If a normal (and not apparently politically motivated) procedure in these cases had been followed by Ashby, then there would have been a completely different outcome. This is demonstrated by a report called 'Formal Complaints of Workplace Sexual Harassment Lodged with Australian Human Rights and Equal Opportunity Commissions 1 July 2009 – 31 December 2009', which said that in 132 cases studied:

So, if this had been handled under the normal procedures which exist for sexual harassment complaints, the complaint would have already been resolved, the Government would not have had to pay $3/4 million in legal expenses.

Of course, if Slipper's alleged 2003 behaviour had not apparently been covered up by Liberal Party staffers, Eric Abetz would not have any cause for complaint. That's unless it is a politically motivated concoction dreamt up to smear and further defame Slipper and assist Ashby's claims.

So, in conclusion, let me reiterate my agreement with Paul Sheehan on the one part of the article I agree with:

'The political mischief in this case has never been in doubt.'

Finally, let's look at what has happened politically.

Peter Slipper has been outed as having used vile text language.

He has resigned as Speaker.

He is probably very pissed off with his former colleagues in the Liberal party.

The Government still has a firm hold on power.

Tony  Abbott is still Opposition Leader, not the Prime Minister.

Nicola Roxon is still Attorney-General. Having done nothing wrong.

And the bleaters are still bleating, but fewer and fewer people are listening.