The Abbott Gov’t and Aspen Medical (Part 2): Aspen, Sandline and the CIA

EBOLA NOT THE WHITE MAN'S BURDEN

US INTELLIGENCE AND ASPEN MEDICAL share a bed whose pillows are made from body bags filled with softest flesh of military down and whose satin sheets are soiled with bodily fluids of corporatised rough political sex and the congealed blood of innocent civilians.

If ever a bed was a warzone, it is within this stinking boudoir.

Like the Tardis, it appears small from the outside but its corporate bullet-proof doors open wide unto the conflict zones of the universe.

Question: why in our name is the Australian Government paying Aspen Medical, thought to be a front for the CIA and other vested interests, to set up an hospital to treat Ebola victims in West Africa's beleaguered Sierra Leone?

A Sarah Palin lookalike, except this warrior babe is even scarier and wears a different shade of lipstick, the 'M' is important to note, because when she's not signaturing Aspen business, she otherwise goes by the name of Kristi Clemens Rogers if and when she uses a middle name, or plain 'ol Ms Rogers, when testifying before the U.S. independent bi-partisan legislative Commission into Wartime Contracting in Iraq and Afghanistan.

Then again, maybe the 'M' stands for Money. Or perhaps she's an Ian Fleming fan and it's an insider Bond joke.

But be warned. She ain't no joke and she's not just a pretty face. No ma'am. She's dangerous, whether shaken or stirred.

Of course, like her political bedfellows Dubya, Donald (Rumsfeld) and Dick (Cheney), to name just a few, she is a stalwart of the Grand Old Party's elephantine Republican Praetorian Guard.

Kristi is a gun for hire, who commanded one of the world's larger private armies of mercenaries.

A tough negotiator, charm is just one of the weapons in her impressive arsenal. To the envy and annoyance of her male competitors, she has won accumulative contracts worth billions of dollars in Iraq, Afghanistan and elsewhere for her corporate masters. Who might they have been ? AND SLIPS INTO PNG UNDER COVER

The handsome Sandhurst-trained Mr Spicer was able to first inveigle his way into PNG through his inclusion in a visiting Australian AusAID team, either through the ignorance of Australia's intelligence agencies, or with their tacit co-operation.

Either way, who signed the paper for Spicer's inclusion in AusAid's team? And why ?

Was Spicer (and his mates from Executive Outcomes, employed by Australia) a UK/Australian spy deliberately implanted in AusAID? Disregarding any revisionist writings and reports, quite possibly.

Does that mean PNG's sovereignty was impinged ? Yes, Of course. But hey, they're a former colony of ours and Spicer and Australia know what's right for these black savages. It's all about the money. Even though Spicer had to take the natives to Court.

Spicer's name is synonymous with controversy. A clever and manipulative self-publicist, Houdini himself would envy his escapes and escapades.

It is clear he has friends in both high and much lower places. Time and again, he has eluded conviction of serious offences — and mysteriously secured the same for his men and/or employees, whether found guilty through the judicial courts or deemed so in the court of public opinion.

SCOTSGUARD CO TIM SPICER AND THE

Before the 1997 Sandline scandal inflamed international headlines, Spicer was the commanding officer in Belfast when Mark Wright and James Fisher, two of the Scots Guards in his battalion, shot and mortally wounded the teenage father of two little girls, 18 year-old Peter McBride.

McBride had been stopped by the Guardsmen, questioned and searched.

In an act of seemingly deliberate execution and military cowardice, the Catholic McBride was shot twice in the back whilst walking away from the foot patrol on Northern Belfast's New Lodge Road, during 'The Troubles', on September 4, 1992.

One of McBride's killers, Wright, was merely a year older than his unarmed victim. Fisher was 24 years old at the time.

In the same year of McBride's murder, for his mastery of his own ' troubles' in Northern Ireland, Spicer was awarded the Order of the British Empire. Job well done.

Despite the fact that the two Guardsmen were convicted of murder and sentenced to life imprisonment, Spicer's intervention, campaigning and political influence – that reaches up to and within Buckingham Palace – greatly assisted the two being eventually freed much to the dismay of McBride's still grieving family, on 2 September 1998, two days before the 6th anniversary of his murder, Spicer making good use of the Good Friday Agreement.

Both soldiers were welcomed back into the British Army and went on to serve in the Iraq War and be promoted. 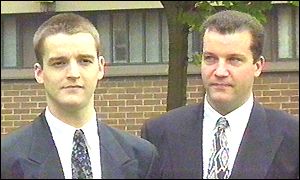 It should be noted that the murder conviction against them has not been overturned.

None of these outcomes could have taken place without the tacit approval of British Intelligence agencies MI6, MI5 and Whitehall.

Spicer's insinuating influence was to come into play again in 2005, three years after he founded Aegis Defence Services, after the release of a trophy video containing footage implicating a couple of 'The Spicer Boys' cruelly firing at random on innocent Iraqi civilians in cars, for sport, causing several to crash and brought to a halt.

Actually, several videos had appeared on a website AegisIraq.co.uk but when IA tried to access the site, up came this message 'Error 404 - Not Found'.

The 'AegisIraq' website seems to have been subsumed into the Aegis World website, the organisation now chaired by Winston Churchill's portly grandson, Nicholas Soames.

A former Defence Minister in the John Major Government, Soames received a knighthood this year, for little reason other than he was once a loyal equerry and Prince Charles' mouthpiece.

Sir Nicholas too, is notorious for saying that Diana, Princess of Wales, was in the advanced stages of paranoia.

As well as being a royal courtier at the time, he was also Minister of State for the Armed Forces.  The remark did not go down well with either the British public or his parliamentary colleagues and certainly not with Diana and he was forced to apologise to Prime Minister John Major.

Conveniently for Kristi M. Rogers and Aspen Medical, Mr Spicer also has a special relationship with Sierra Leone and not just because it is a former British colony.

He was 'caught' smuggling tonnes of Bulgarian-sourced weapons into Sierra Leone, technically violating both United Kingdom and United Nations embargos. Ministers of the Crown were implicated, as was the Foreign and Commonwealth Office. Spicer gave evidence and the scandal eventuated into little more than a group hug.

Not only will Ms Rogers be able to compare notes about Sierra Leone with Mr Spicer, but they will also be able to get misty-eyed about their respective times in Iraq.

Kristi M Rogers knows Iraq very well — as well as she knows Aegis and the innards of the U.S. Government, its industrial strength surveillance  division, the National Security Agency (NSA) the Defense Department and Capitol Hill.

In latter years, Ms Rogers has been accused of sleeping her way into securing lucrative contracts for her companies. Justifiably so.

Kristi Clemens Rogers is the second wife of Mr Rogers, a former (if there is such thing) special agent for the FBI based in President Barack Obama's hometown of Chicago, and, yes, he's a Republican Senator for Michigan's 8th District, whose first name is Michael and, for those who care, his middle initial is 'J.'

Senator Rogers is chairman of the scandal-ridden Permanent Select Committee on Intelligence and as such serves as an ex officio member on all the sub-committees,so has access to everything, including classified information on Australia, its politicians and citizens.

Now that is a mighty handy intel source for Missus Rogers. They are an uber power couple suffering from a particular sexually transmitted disease that is rife in incestuous Washington — conflict of interest, COI. No Coitus interruptus tolerated here.

Whilst it was passed by the House it was rejected by the Senate.

Effectively, it allows for two-way traffic of personal and private information between Government and private companies, including the likes of Aspen, Aegis, Blackwater, G4S, Serco, regardless of their various noms de guerre, to whom the United States, Australia and the rest of the lazy world of international political and corporate governance, outsources its dirty deeds. And they are not done dirt cheap.

SENATOR ROGERS HAS CHEEK TO POINT

In April 2012, Senator Mike Rogers ludicrously attempted to allay fears that CISPA was not about spying on ordinary Americans, but that it was about spying on the Chinese. Good one!

Keeping a straight face at a Washington business breakfast, he blustered:

"I've never seen something grow more exponentially serious than China's capabilities in cyber espionage .... It is so prolific — it's breathtaking.

"In the last year, China has stolen so much intellectual property that it would be considered 50 times the print collection of the United States Library of Congress."

It's a wonder no-one in the audience choked on their hashfries at the audacity of this disingenuous statement. The U.S. Government is a serial offender in wholesale global spying.

If there's one government that has grown "more exponentially" than China in global cyber warfare on citizens, it is the United States.

The world asks for lots of new people to help with Ebola. Aspen starts talking about sending 30 from Oz. http://t.co/xhTQZAC2hB