Thai rescue highlights humanity — but not in our leaders

In Australia, we erupted with joy as we watched the Thai rescue, but our leaders have not planned a rescue operation for 134 children still imprisoned in Nauru, writes John Passant.

THE RESCUE of the 12 young soccer players and their coach from a cave in Thailand shows all that is great about humanity.

Compassion, global cooperation, love, skill — all were on display.

Around the globe, billions hoped and prayed as we watched the teams racing to save the boys and their coach. We erupted with joy when they were all led out safely.

This shows the heights to which we can rise together. That is what makes the rescue so special. In a world where, daily, we seem to be fed the worst of what humans do here was something genuinely uplifting.

It helped that there were reporters at the site to show the world what was going on. The Turnbull Government knows the impact that reporting on the plight of humans, including women and children, can have.

For that reason, couched in terms of threats to national security, it is currently illegal to inform the world about the mistreatment of the kids, women, and men the Government imprisons on Nauru and Manus Island. That is why Turnbull also supports, "regrettably", the right of his puppet Government in Nauru to ban the ABC from attending the Pacific Forum in September.

God (and Government) forbid that we send a rescue team to Nauru to save the 134 children imprisoned there for up to five years. Instead, Home Affairs Minister Peter Dutton refused to allow a couple of sick young children being bought to Australia for medical treatment, but his decision was overturned by the Federal Court.

Watch our @DanielHRLC's address to the UN Human Rights Council last night about the Turnbull Government's deliberate destruction of the lives of children - 134 it keeps in its off-shore refugee camp on Nauru. More info here: https://t.co/KRjlbLueQO pic.twitter.com/kW9hRE9nfi

The world today is a horrible place. The genocide in Yemen by "our" Saudi and other allies continues.

Assad, the butcher of Syria, and Putin, his Russian imperialist backer, are destroying the birthplace of the democratic revolution.

In Gaza, children are killed for challenging the occupation and the territory is currently being bombed.

In Myanmar, Aung Sung Su Ki – the former darling of the West – and her Government, are committing genocide against the Rohingya.

The existential threat to capitalism and the planet that is climate change continues unabated and unchecked.

It is all pretty bleak, isn’t it? What the Thai soccer team rescue gives us is hope in a hopeless world. For that alone, we should be thankful.

But the rescue gives us more than that. It gives us a glimpse into an alternative world — one based on caring and love, and not dominated by base money-making motives and scheming. Our humanity saw us watching the drama for days. It had us hoping and praying for the boys and their coach. And how our hearts lifted every time a group of the boys was freed. Why? Because in an inhuman world, here was our humanity writ large. It was an example that rebutted the inhumanity and neoliberal lies of our political and economic "leaders".

It is not the only recent example. Up to 250,000 people protested in London against U.S. President Trump and his inhumanity.

"God save the Queen from an orange tangerine."

He said, among many other things, that what unites us is

... a wish to live in a world of peace not at war, a wish not to blame refugees for wars that they themselves are victims of, and a wish that we pursue the politics of unity, the politics of togetherness, the politics of recognising the strengths and the good that is in each of us, however poor, however marginalised, however put-upon.

Imagine Bill Shorten attending possible protests against Trump when he is in Australia in November, let alone speaking in these terms. Or imagine him spreading that humanity to asylum seekers on Manus Island and Nauru.

Adul Sam-On, one of the trapped soccer boys, speaks four languages, is a top student and a good athlete. He was the contact between the English speakers on the rescue team and the boys.

He is a Rohingya refugee from Myanmar and is currently stateless. If Adul Sam-On had tried to come to Australia on a boat to seek asylum he would now be imprisoned on Nauru.

Stateless teen from #ThaiCaveRescue speaks 5 languages, plays 3 instruments, is a straight A student, excels at sport & managed comms with British divers. If he came to #Australia seeking a refuge we'd trap him in a cage on Nauru & refuse him entry #auspol https://t.co/Ne4fK3OdLZ

Commenting on the role of Dr Richard Harris in the rescue, Bishop said:

This is what Australians do so well. Under our aid program, we have tragically many opportunities to support neighbours in times of crisis and so this is just another example of Australia being a good friend, a good neighbour and helping out when it is needed.

In fact, the Abbott and Turnbull governments have cut our overseas aid budget in real terms every year they have been in power.

As ABC Fact Checker says, drawing on, among other sources, Australian Aid Tracker:

'The Development Policy Centre, led by Professor Howes, has published an inflation-adjusted time series on its Aid Tracker website that shows Australian aid spending in 2018 dollars. According to its figures, the Government's cuts range from between $953 and $8 million.' 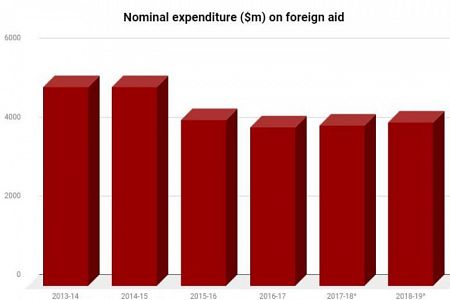 This is a source of shame, not a cause for celebration. It again illustrates the inhumanity of our political leaders compared to the instinctive humanity of millions of Australians.

Dr Harris and other Australians were there as part of a global humanitarian effort. Their participation transcended the narrow nationalism of Julie Bishop and her aid-cutting buddies. As Nauru and Manus Island show, cutting aid is the least of their crimes against humanity.

How then can we reclaim our humanity from the inhuman political elites? The protests against Trump showed a possible way. These were protests against racism, sexism, impoverishment and war — to name a few. Trump is the classic caricature of an uncaring ruling class figure; he is its inhumanity concentrated in one person.

While one target could be a good catalyst, we must go beyond that. We can and must make the case against all instances of our leaders’ inhumanity, whether it be Manus Island and Nauru, or Aboriginal genocide, or future cataclysmic climate change, increasing poverty, falling wages, gaoling of unionists and whistle-blowers... the list of injustices is seemingly never-ending.

We have a world to win, and the rescue of the boys’ soccer team in Thailand gives a glimpse of what we can do together. 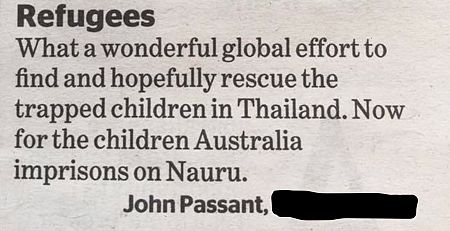 In memory of Saman Gunan, who lost his life as part of the global humanitarian effort to rescue the boys.

Read more by John Passant on his website En Passant or follow him on Twitter @JohnPassant. Signed copies of John's first book of poetry, Songs for the Band Unformed(Ginninderra Press 2016), are available for purchase from the IA store HERE.