The strange and suspicious case of Tony Abbott’s citizenship

Why is the PM's chief of staff so desperate to prevent proof emerging about whether Tony Abbott is eligible to sit in Parliament? Sydney bureau chief Ross Jones reports.

You don’t want to be blocked by Mal Brough — look what happened to Peter Slipper.

It happened to Tony Magrathea when he posted a message to Brough telling him there was a serious cloud hanging over the legitimacy of his leader, Anthony John Abbott, to hold the highest public office in the land.

Magrathea is a Sunshine Coast-based blogger who doesn’t normally get involved in the political arena. He refers to himself as ‘The Ideas Man’ and his blog normally covers technology issues.

Born in England, Magrathea is about the same age as Abbott and, like Abbott, came to Australia as a £10 pom. Abbott arrived in 1960 aged three.

Magrathea noticed an odd thing: Abbott had been apparently granted Australian citizenship back in 1981 — as he was entitled to do, because while his father was British and he was born in London, his mother was Australian. This apparent change in status meant Abbott was now a dual British/Australian citizen.

1981 was the year Abbott ‘matriculated’ to Oxford, but he did so as a British citizen. 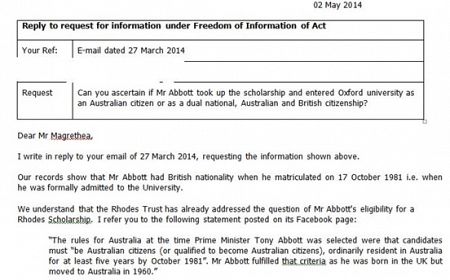 After Oxford, he returned to Australia and entered a seminary. The priesthood didn’t stick and, after managing a cement plant, and then some stints as a journalist, monarchist and apparatchik, he entered Parliament in 1994.

Section 44 of the Australian Constitution is clear when it says:

.... shall be incapable of being chosen or of sitting as a senator or a member of the House of Representatives.

So Magrathea, in an idle moment, had a look around for the date Abbott renounced his British citizenship — but there was no apparent record.

Was Abbott eligible to stand for office? http://t.co/EMlhonFTtO

He first turned to the National Archives of Australia who keep citizenship applications for everyone who applies to be an Australian citizen. These documents should record if Abbott had renounced his British citizenship at that time.

These are generally public documents available to all. However, in Abbott's case, the NAA decided to make the application file a secret document in February 2014.

Coming up blank there, he turned his attentions to the UK Border Office, part of the Home Office, which has a form called

This declaration is otherwise known as Form RN and around 450 are completed each year.

In early May, Magrathea sent an FOI to the Home Office asking for Abbott’s RN.

They say they are still looking.

So, Magrathea put in an FOI to the Department of Prime Minister and Cabinet. Having half a brain, Magrathea waited until Abbott ‒ and, more importantly, his chief of staff Peta Credlin ‒ were in Washington in June.

Things, according to Magrathea, were going well and he’d made contact with a Department staffer who was willing to help in his quest. Apparently, on the day the public servant was to formally respond to Magrathea with the results of his search, Credlin came home and went straight to the office. She immediately kyboshed the request and told Magrathea,

Magrathea posted a note to his Federal MP Mal Brough’s Facebook page, pointing out that any doubt over the Prime Minister’s legal right to hold office should be settled before the upcoming G20 Summit.

He posted the same thing to the Attorney-General Senator George Brandis. Nothing.

He posted to Opposition Leader Bill Shorten. No reply.

He wrote to the Federal Police regarding a possible crime against the Commonwealth. Nil. He wrote to Governor General Peter Cosgrove. Nada.

On 1 August, Magrathea’s email account was hacked and all his emails were deleted. What started as an innocent enquiry has begun to morph into something quite serious — and perhaps sinister. Certainly suspicious.

Abbott can clear the whole thing up in the blink of an eye, of course — just show us the RN and it will all be over.

But he and his camp followers don’t seem to want to do that — or allow others to release this information. We can only wonder why.

If the British Home Office come back to Magrathea and say they are unable to find the RN, things may move up a notch.

Find out more about this issue on Tony Magrathea’s blog tonymagrathea.blog.com.

Help make it happen for The truth about our PMs citizenship on @indiegogo http://t.co/w1roQDq8w0

Regarding signing this petition, just think: who do you have to lose? http://t.co/CVkaFk3fGT #auspol #TeamAustralia pic.twitter.com/K5m1aUmnwq

Tony Abbott y'day: "As Australians we are proud to say that we were born under this flag," http://t.co/cXMJseKFsi Wasn't he born in London?