The man who opened the can of worms about Abbott’s potential ineligibility to sit in Parliament, Tony Magrathea, explains why he is not a “birther”, as some have alleged.

Why. Some people are wondering why I have been at Tony Abbott to tell the when of his renunciation of his British citizenship.

Let me make this plain: I am not a birther.

I know where Tony Abbott was born, when he was born and who his parents were. I know when he got his Australian citizenship and why. The missing bit is the when of his renunciation.

I was born in the UK in the same year as the Prime Minister and we both came to Australia as part of the £10 pom programme. In my case, I was an addendum to a sheet of paper in my father’s passport — the sheet of paper showed mum was dad’s wife. We were a little better than the Abbotts, we flew.

In 2013, around the time of the election, I decided to have a look at the other ten pound pom and see his story. And things didn’t quite add up.

So, being the sort of person who needs to know why things aren’t quite sitting right, I looked. 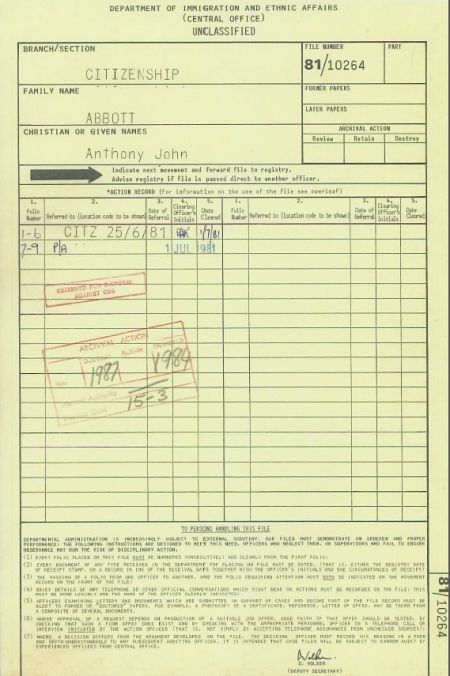 In February 2014, I was looking at his Australian citizenship papers in the National Archive of Australia when they went secret. Disappeared off the screen and out of the NAA online archive. Strange and stranger.

I delved deeper and found out about the Constitution, section 44 which stops dual nationals from being parliamentarians. So off I went to the Department of Prime Minister and Cabinet to see how I go about getting a look at his renunciation papers. I found out these were called the Form RN.

I had never made an FOI request before, so I asked the public servants in the department how you go about it. Peta Credlin contacted me and said if I ever lodged an application for an FOI peek at the Form RN, she would refuse it.

Another why? Why would she say that? Why would the chief of staff of the Australian prime minister suddenly become a clerk class 5 or 6 and do FOI requests?

Me, being who I am, waited until she was off in Washington with the boss before lodging the FOI application. I figured that being a liberal she couldn’t resist the chance of a holiday part paid by the public purse, I bet she would stay away for a holiday. It seems she did and the public servant I was talking to at PM&C was “that close “ to releasing the results of my FOI request.

By now I have no doubt you have come to the conclusion that Mr. & Mrs Abbott were having a dinner with Rupert pic.twitter.com/dgjLvk9sHj

And then Peta Credlin came home, found my application and refused it.

Similar story in the British Home Office, FOI requests by law have to be done within 3 weeks over there. Mine was held up for about a month as they went to and from the Foreign Office to decide if information could be released.

In the end, they refused to release information about Abbott’s Form RN.

So the form is still being kept hidden. But why?

This has gone beyond a nutter trying to cause trouble, which I never ever set out to do. This is the prime minister of Australia hiding the only form that can prove he is in the job legally.

I wrote to my local MP Mal Brough and sent similar letters to Queensland Senator Attorney-General George Brandis and to the Speaker Bronwyn Bishop. I didn’t rant or call for mass sackings, I asked the three of them to try and get the Prime Minister to sort things out before the G20. We have 19 huge and important governments and the rest of the world watching us in September and it would be rancidly bad for the country if our PM was under a cloud of suspicion for not being in the job legally. 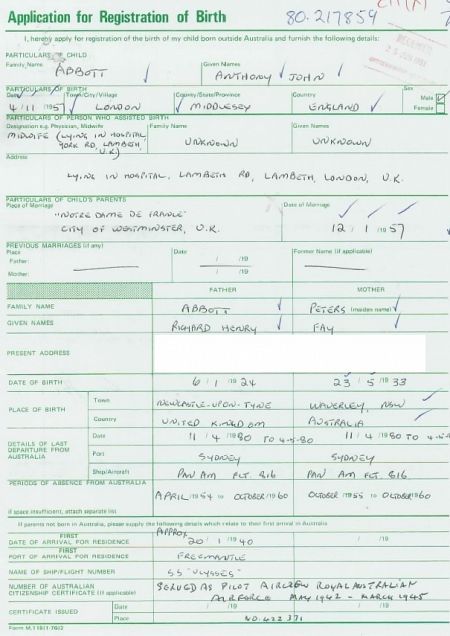 If it turns out Mr Abbott has signed false statutory declarations to enter parliament then, it could be argued, everything he has done in Parliament becomes null and void. That his ministerial and prime ministerial decrees and decisions all go out the window. That the sale of uranium to India be declared null and void. His departmental decrees as minister for health becoming even more dubious?

He has to tell the people when he renounced his British citizenship.

As an aside, from watching the man, from reading about him and reading of his beliefs about citizenship, it appears he seems to think citizenship by descent overturns his British citizenship, but according to the Home Office and the High Commission in Canberra that is just not so. He became a dual national when his mother filled out the application form to make him an Australian citizen in 1981, ironically, so he would be eligible to get a scholarship from the Rhodes Trust to attend Oxford University back in the UK.

They have since changed their rules to make sure no one ever does an Abbott on them again.

Regarding citizenship by descent, Mrs Abbott had to give up her Australian citizenship and become a pom so she could get on the ten pound pom boat trip. Or she did what my mother did, came across as a sheet of paper in her husband’s passport and, if she remained Australian, she and her children can probably be considered illegal boat people. 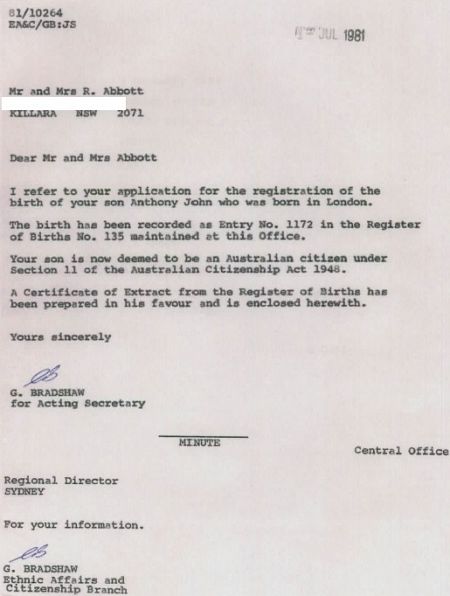 Now that tickled my funny bone. I am not in any condoning anything to happen to mummy Abbott — shit happens.

But her boy? Show me the form.

Read more about question of Abbott's possible split allegiances here. You can read more by Tony Magrathea on his blog tonymagrathea.blog.com or follow him on Twitter @dickiebeachholdie.

@samanthamaiden so here's the thing. Gillard's revocation of Uk citizenship is out there. Where is Abbott's? @vanOnselenP @PMOnAir

@PMOnAir @vanOnselenP Did Tony tell you that while you were giving him a back rub?

Middle finger for the Census 2016

9 August 2016, 11:30am Due to personal experience of how such data can be obtained for purposes other than ...

6 September 2014, 2:30pm The man who opened the can of worms about Abbott’s potential ineligibility to sit ...
Join the conversation
comments powered by Disqus
News updates