A gem or a dual? Tony Abbott's Lying-ingate

As Tony Abbott’s wimps out on his threat to shirtfront Vladamir Putin, more evidence emerges to suggest he has never renounced his British citizenship. Sydney bureau chief Ross Jones reports.

ON 28 OCTOBER 2014, a woman stood in the public gallery of Parliament House and shouted something at Tony Abbott that saw her summarily ejected by security.

It is still unclear what actually happened.

The only report of the event was made by AAP and the only outing that report received was in a couple of News Ltd websites.

AAP have the woman shouting at Abbott:

That’s not much to shout before security gets you.

If it was indeed all she shouted, she must have been standing directly next to a security guard who managed to muzzle her outburst while dragging her from the gallery. While there is heightened security in Parliament House since the Coalition gained control and started poking ISIS and the former Soviets with pointy sticks, a response time like that would still be greased lightning.

So, the woman probably had time to mention some other stuff as well — stuff not mentioned by AAP, possibly continuing to shout even as her heels dragged across the floor towards the exit. I’m pretty sure it would be against OH&S for an un-gloved meaty security paw to be placed over an uncovered shouting mouth.

If a person goes to the public gallery with the intention of screaming at Tony Abbott they don’t give up that easily. She probably screamed the scandal that, for fear of ridicule, dare not speak its name.

She told AAP her threat was centred on Tony Abbott and related to documents she was denied under Freedom of Information about his birth certificate and legitimacy as prime minister.

AAP has misreported the birth certificate detail. IA has received information from Jan Olson and none of it related to Abbott’s birth certificate — for the simple reason that there is no controversy about that at all. Tony Abbott’s circumstance and place of birth ‒ London ‒ is a matter of public record and not contested by anyone, as far as we are aware.

You can see the full birth certificate application below: 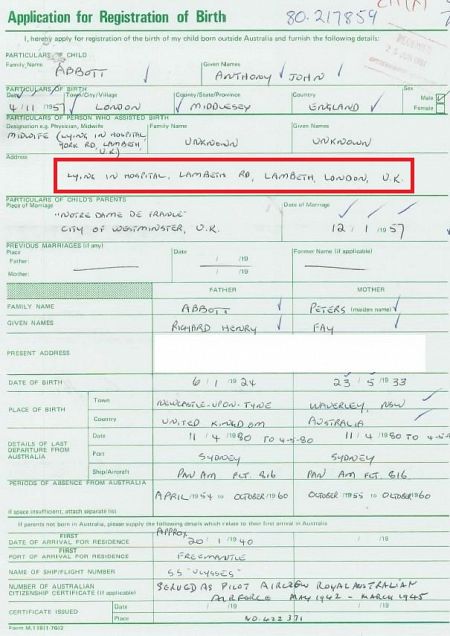 The event that precipitated Jan Olson’s outburst was, in fact, receiving a letter a few weeks earlier (dated 8 October 2014) from Robert McMahon, Assistant Secretary, Parliamentary and Government Branch of the Department of Prime Minister and Cabinet.

In it, McMahon confirmed the subject of his letter was a response to an application by Ms Olson under the FOI Act for an official copy of the Official confirmation of Abbott’s renunciation of British citizenship.

So, nothing to do with a birth certificate, but rather a request to see evidence Abbott had given up his British citizenship — something required by the Australian Constitution because the founding fathers did not want representatives with loyalties to foreign powers. The 1999 High Court decision in Sue vs Hill confirms dual UK / Australian citizens are ineligible to sit in Federal Parliament.

Ironically, Abbott, only became an Australian citizen in his 20s so he could accept a Rhodes Scholarship to study at Oxford University, back in England.

Back to the FOI request response to Jan Olson's request for evidence of Tony Abbott's renunciation of British citizenship:

Robert McMahon confirmed he was an ‘authorised decision-maker’ under the FOI Act.

He then went on to say the Department had searched its file management system, its current and former ministerial correspondence database, the computer drives of its relevant departments and the email accounts of current officers in relevant branches and [IA emphasis]:

‘As a result of these searches, no relevant documents were found in the Department.’ 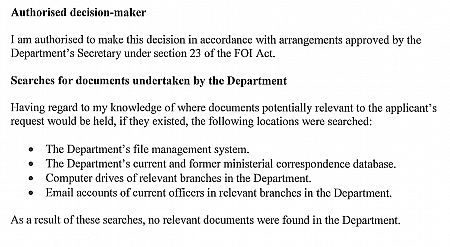 It was the fact the Department had confirmed that Abbott had never provided proof of his renunciation (the Form RN for British citizens, not a birth certificate) that had so angered Jan and convinced her of Abbott’s likely deception.

If Abbott had, in fact, renounced his citizenship — surely this documentation would have been provided to Abbott's own Department?

And Jan is not alone. Now Putin is getting in on the act as well.

The frostbite between Vlad the shirt-fronted and Our Tony at APEC is palpable. They won’t look at each other. They won’t even shake hands for the camera.

But he’s cunning bastard, Putin. Not for nothing did he run the KGB.

He is also, from the old days, quite good friends with the chaps at Pravda. Which is probably why Pravda is going to run a little piece on Tony’s credentials in its English website; a sort of follow-up to the popular one it did in October after Abbott’s infamous shirtfronting statement. 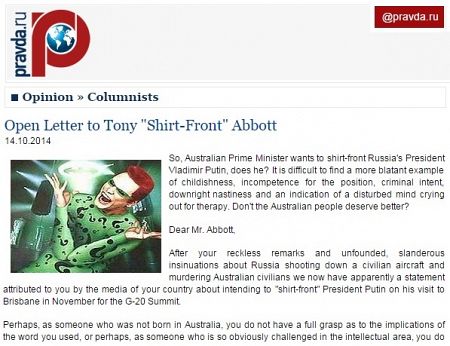 Russia no longer has the KGB — now it has the SVR (in English, the Foreign Intelligence Service), who are also quite good at finding stuff out. The Pravda article might just be boring stuff and not tell us anything new, but then again, you never know.

While remaining steadfastly light on detail, the AAP/News Limited story managed to get in the following sly dig:

US president Barack Obama faced the same birth conspiracies with rumours circulating during his presidency campaign that he was not a US citizen.

However many have called these theories racist and Obama has never succumbed to pressure to show his birth certificate.

This is obfuscation writ large and has absolutely nothing to do with the issue. It’s the equivalent of rounding out a story on Peta Credlin with a reference to Margaret Aitken’s kindergarten years (Mrs Abbott to you).

The Australian media are, for some reason, desperate to protect Australia’s split loyalty PM — even to the extent of conflating completely unrelated issues and bizarrely introducing the topic of “racism”. 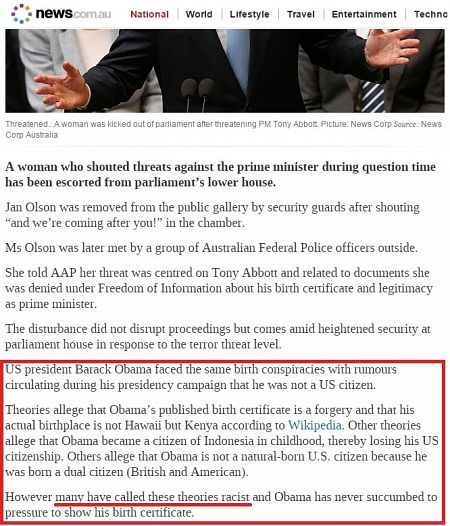 As Anthony John Abbott was born in 1957 at the ‘Lying-In’ hospice in Lambeth, Lying-Ingate has a certain ring to it.

If he wants kill this issue, all he needs to do is prove he has renounced his British citizenship. Or maybe big bad Vlad will come up with the proof ‒ one way or the other ‒ in Pravda on Friday.

You may access Jan Olson's FOI response here in full.

Spread the pic and the petition please. http://t.co/p2ZMqb3Zcq Its almost time for enough to be called enough pic.twitter.com/9Erc8w7WIM

And you can meet Ross Jones ‒ whose first article on the Abbott eligibility issue has, incidentally, become IA’s most popular ever story ‒ in person at an IA function at the Summer Hill Hotel on November 21, where he will be speaking about his forthcoming Ashbygate book.

Don't forget to RSVP to the IA do at the Summer Hill Hotel in Sydney on 21 November. http://t.co/o8yI1jTdxo

The strange and suspicious case of Tony Abbott’s citizenship, by Ross Jones. http://t.co/VpDMvFsFSD

Tony Magrathea, explains why he is not a “birther”, as some have alleged. http://t.co/1TxJxkyRDC

Nothing but blue ties from now on when you buy @JohnGrahamArt originals from the IA store. http://t.co/MxyTxlzgOt pic.twitter.com/NhJv9fmlaj