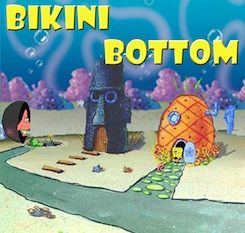 Kids' cartoons almost always include some adult humour to keep Mum and Dad interested, says Roxanne Porter from NannyJobs.org. Here is a list of 10 of them that sail very close to the wind.

I think it’s a pretty well-known fact that the creators of cartoons almost always include some adult humour into their cartoons. They know that parents are basically forced to watch cartoons with their child and, in order to get the parent’s vote for what to watch, they include some humour that only adults will understand. Many times, these things are politically incorrect. Check out 10 politically incorrect things from kids cartoons:

Sponge Bob lives in Bikini Bottom and one of his best friends is named Sandy Cheeks. A sponge living in a bikini by itself is not very PC. The adult humour abounds in this very popular cartoon. Sponge Bob runs around in his underwear a lot and he and Patrick Star call each other stupid and jerks. This cartoon has come under fire from a lot of parents. Churches and religious organizations have also suggested that this cartoon is promoting homosexuality, with their use of rainbows in many of their episodes and the close relationship between Sponge Bob and Patrick. Creators of the show have denied any hidden agenda.


3. Princess and the frog

This movie is set in New Orleans and includes a lot of voodoo and jazz references that have been criticized as stereotyping the less than savoury neighbourhoods of New Orleans. New Orleans was the site of a lot of racist crimes against African-Americans and questions have arisen as to why Disney would set this cartoon in this location. Creators claim that they decided on the locale first and the rest fell into place afterwards.

This Disney classic used a group of black crows in racist roles and they are characterized as being stupid and one crow is shown wearing a pimp hat.  One of the original opening songs, sung by the crows, talks about:

“Working all day and all night having never learned to read or write. They were happy roustabouts. ”

“When others have gone to bed we slave until we are almost dead.”

The song goes on to talk about:

“When they get their pay, they throw it away.”

The blatant racism in this song is very politically incorrect.

In Speedy’s first appearance in a cartoon you see a bunch of sombrero wearing mice behind a wired fence and they want the cheese on the other side. They refer to Sylvester the cat as a gringo and they send for Speedy Gonzalez to get past him.  Sylvester is guarding the border.

In the opening song “Arabia Nights” the lyrics talk about getting an ear cut off if they don’t like your face, “It’s barbaric, but hey, it’s home”. The lines in the song came under such strong criticism the lines were later changed to be less offensive to Arab people.

The Simpsons was created to make fun of dysfunctional families. The stereotypes that exist in the show are part of what make it funny. Bart appeals to kids, but he’s disrespectful and tells people to “Eat my shorts”. Homer spends a lot of time drinking beer at the bar. Christians are depicted as being stupid and fanatical.

This show has come under a lot of criticism for its use of animated nudity, profanity and violence. They had one episode where a barber shop quartet danced and sang around the hospital bed of a guy with end-stage AIDS and sang about his diagnosis. The series came under a lot of fire from AIDS organizations for indecency.

Hyenas depicted with African American and Hispanic characteristics live in the dangerous shadow areas of the jungle and they portray it like a jungle version of an inner city ghetto. The stereotypes of these two cultures abound. The hyenas are lazy, killers and willing to make a deal with the devil (Scar).

(This story was originally published on NannyJobs.org on 12 February 2012 and has been republished with permission.)