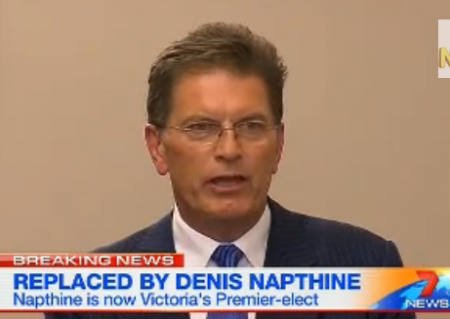 Ted Baillieu was too decent to be a Liberal politician; when the likes of Tony Abbott can be elected leader of that once great political party, the bar is lowered. What Robert Menzies and Henry Bolte would be thinking is anyone’s guess.

And if Dennis Napthine thinks he will lead the Liberals at the next election, he should think again.

The forces of an Upper House Minister, Matthew Guy, are already sharpening their knives. They have been active for weeks and the bizarre allegations that have been plastered all over the pages of Rupert Murdoch’s Herald Sun top-selling tabloid have helped their cause.

The fact that a Murdoch-owned paper is directly responsible for the downfall of a Liberal Premier is puzzling indeed. The national broadsheet, The Australian, has become a Liberal Party megaphone, in which hyperbole has descended to amazing depths to get their sleazy message across.

The events which caused Baillieu’s resignation on Wednesday are plain to see and we are indebted to the Murdoch hacks for getting hold of secret tape recordings which revealed conversations at many levels of Liberal Party and National Party politicians and senior staffers who successfully rolled the former Commissioner of Victorian Police, Simon Overland.

Rumours have been swirling around Spring Street for weeks that National Leader Peter Ryan was masterminding the Overland killing.

Naturally, Ryan in shock horror and disbelief, put on a dummy spitting denial which will go down in the political history books of the time.

To unravel the drama it is necessary to go back to the establishment of the Government’s Independent Broad-based Anti-corruption Commission (IBAC).

IBAC is a tiger without teeth — it cannot deal with alleged corruption when Ministers or their staff members are allegedly involved.

This saga surrounds a host of such people.

The oft-asked ‒ but never answered ‒ question of just how much Peter Ryan knew about the plot to undermine Overland now thickens; Ryan denied in Parliament and to the Office of Police Integrity he knew anything.

When the trouble was brewing,  and allegations emerged that Weston was somehow involved in the taping, he, Weston, was given the flick, but not before Nutt, in a rare moment of generosity, told him that, as a member of the Liberal Party “family,” a job would be found for him and he was given, by the Liberal Party, $22,500.


That must have made Party donors pleased to know their money was being used for a good purpose...

This whole unsavory, bizarre, dirty saga is just beginning, so we ask readers to watch this space, as it may be we ain’t seen nothin’ yet!