The Fair Work Commission must reject calls for "wage restraint" from the business lobby at a time when many are banking record profits – with some even pocketing Jobkeeper allowances – at the expense of struggling workers. Emma Dawson reports.

THE FAIR WORK COMMISSION'S 2021 Annual Wage Review (AWR) is occurring in the context of the most uncertain economic outlook Australia has experienced in decades. It follows a Federal Budget that projects weak wage growth across the economy for at least the next four years.

After the biggest economic shock in a century, economic activity is picking up and unemployment is down. Businesses across the country are reopening and reinstating, or hiring new, staff. Some small businesses – particularly in the hospitality and tourism sectors in regional areas – are struggling to get back to full steam.

Other larger businesses have banked record profits during the pandemic, with some even pocketing millions of dollars of government funding that was intended, via JobKeeper, to be paid as salaries to workers. Harvey Norman, for example, notoriously pocketed over $22 million of taxpayer funds in unspent JobKeeper wage subsidies as its profits hit a record high during the acute phase of the pandemic last year.

Yet 60% of the jobs created in the last six months are casual, while less than a quarter are full-time. Underemployment and job insecurity remain a significant problem within the Australian labour force, as they were before the pandemic. Too many Australians are not working enough hours, or receiving adequate rates of pay, to sustain themselves and their families.

It is against this backdrop that employer groups and business lobbyists, with the support of the Federal Government, are arguing against a much-needed increase in the minimum wage — despite the Government’s fiscal projections for economic recovery relying heavily on high levels of consumer spending over the forward estimates.

Higher wages for low and middle-income earners translate directly to more consumer spending in local economies. As the Government’s own budget forecasts show, domestic consumption by private households is critical to supporting Australia’s economic recovery. Domestic consumption will play an even larger role in the health and growth of our economy until international borders reopen and major export industries, such as tourism and international education, begin to recover to pre-pandemic levels. 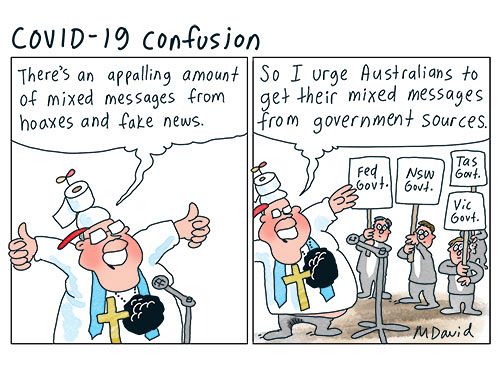 When confronted by serious matters such as threats to public health and safety, the default position of rightwingers is to wash their hands of it.

Given that up to one in four Australian workers relies on the annual minimum wage decision to directly or indirectly determine their take-home pay, suppressing growth in the minimum wage and related awards will have a significant dampening effect on disposable household incomes and, consequently, on domestic consumption.

Yet submissions by business lobby groups and the Federal Government to the AWR reveal a significant disparity between the rhetoric of supporting household incomes and wage growth, and the reality of an approach to industrial relations that still sees the wages of workers as a business cost to be reduced in the pursuit of profit.

In their submissions to the AWR, business lobby groups including the Australian Chamber of Commerce and Industry (ACCI) and the Australian Industry Group (AIG) are urging FWC to limit any increase in the minimum wage to just 1.1% — well below the rate of inflation predicted by the Morrison Government’s Budget papers earlier this month, and even short of the Government’s expectations on wage growth.

After successfully appealing for a nine-month delay in last year’s wage increase for retail workers, the Australian Retailers Association (ARA) is again arguing for any increase this year to be deferred until November. Even then, should statistics from the second half of the year show substantial GDP and retail trade growth, the ARA argues that any increase in the minimum wage should be limited to CPI – that is, wages should be kept in line with cost-of-living increases, forcing yet more years of stagnant or declining living standards on Australian workers and their families.

The Morrison Government’s new focus on reducing the headline unemployment rate is welcome, but will likely be insufficient to drive the growth needed for Australia’s economic reconstruction. The purpose of achieving full employment is not simply to produce a nice set of numbers. Full employment as a fiscal tool to drive growth only works if the jobs of working people come with secure conditions and rates of pay that allow ordinary families to spend on more than the essential bills and keep living standards growing.

A recovery that leaves working people behind is
no recovery at all.

That employers are again calling for "restraint" in providing a wage increase – after banking strong profits and funnelling government wage subsidies to shareholder dividends and executive bonuses throughout the pandemic – clearly shows that the aim of big business is to hold down wages in perpetuity, and to maximise company profits at the expense of rising living standards and broader economic growth.

Such arguments are a threat to Australia’s economic recovery from the pandemic and must be firmly rejected by the Fair Work Commission.

At a time when there are hundreds of billions of public dollars sloshing through the share market and pushing up asset prices, it is economic vandalism to actively suppress wages for people who live off the income from their labour. Not only will a decision to limit wage growth for low and middle-income earners hold back Australia’s economic recovery, but it will also widen inequality and reduce social mobility.

Despite record levels of government debt and spending, should the commissioners accede to the demands of the business lobby and its supporters in the Federal Government, all we will have to show for this massive fiscal injection in a decade’s time is a much wealthier upper class, a poorer working class and a shrunken middle class.

That is not the kind of recovery Australians want, or deserve. As we rebuild our economy after the shock of COVID-19, the incomes of working people must be our first priority. A recovery that leaves working people behind is no recovery at all.

If our goal is to restore economic growth that will support better living standards for all Australians – rather than simply increase headline growth rates and the wealth of those already doing well – an increase of 3.5% in the minimum wage, to keep incomes just ahead projected cost of living increases over the coming year, is essential and must not be delayed.

Last year, Gerry Harvey said COVID was “pretty much nothing to get scared of”. He boasted freezer sales were up 300%.

On Friday, Harvey Norman will report a ~$500m profit, boosted by millions in JobKeeper subsidies.

Emma Dawson is an IA columnist and executive director of Per Capita. This is an edited extract of her latest research paper, 'Just Reward: The case for a wage rise after COVID-19' (available Wednesday 26 May 2021).