Tony Abbott’s ‘Closing the gap’ speech has apparently made some wonder whether the PM has changed and become a kinder, better person. Lyn Bender says he’s still the same Tony.

IS THIS THE NEW TONY ABBOTT, who speaks from the heart? Or is it merely an attempt at damage control by minders of Tony’s personality?

Perhaps Tony Abbott had a friendly visit from the ‘Queer Eye for the Straight Guy’ team.

Has he been coached in how to be more persuasive and to appear more empathic and cool? Will he no longer be photographed in lycra or the hallmark red speedos? Will the blue tie be phased out in favour of something more adventurous? Will the tough love, authoritarian parent image, give way to a fair, but firm, guardian?

The superficial signs of a remake are all there in the text and subtext of his ‘Closing the Gap’ statement.

According to some in the conventional media, it seems the big question is not the fate of Aussie workers or of manufacturing in Australia, or even of Indigenous Australians. The big question they explore is: who is Tony Abbott? Has he been misunderstood, underestimated and maligned?

He has only been in the job of PM for five months, Flint exhorts us to remember — which in such a complex role is five minutes, really.

‘The government is making tough decisions on manufacturing, immigration and the environment. Let's hope this extends to workplace relations reform, and if it does, for the good of all Australians, let's give it a fair go.’

Abbott getting a ‘fair go’ has been something of a rallying cry for outraged conservatives.

“Don’t expect Tony Abbott to get a fair go.”

Bolt would have nodded sagely to himself when Abbott’s first 100 days were proclaimed by Channel 7 news to be the worst of any new government in Australian political history. He may have frowned grimly upon seeing new media sites being highly critical of Abbott’s decisions and performance so far. He may well have been aghast at Alan Austin’s article, “Abbott’s new world record: 25 broken promises in 150 days” having over 17,500 social media shares. The whole situation may have been what led Bolt to arrange adding an extra ‘media segment’ to his regular Sunday propaganda spot on Channel 10.

Whatever, many are noticing Abbott’s performance.

Indeed, Abbott has been described as a man who has many attitudinal problems with:

That is quite a list of complaints about Tony Abbott, yet it is merely a small sample. There are more.

To offset the rampant criticism, others seem to be overcompensating with the fulsomeness of their praise.

In Fairfax Media, during this year's first sitting of Parliament, in January, Michael Gordon wrote that Abbott had

‘... delivered the most powerful  heartfelt and gracious speech, [regarding closing the gap of Indigenous inequality] of his short prime ministership.’

This may be damning Abbott with faint praise, as his oratory has hitherto been derided, seen as absurdist, or made to entirely disappear from the Coalition website.

Gordon reports that Australian of the Year Fred Chaney stating:

''I'm prepared to lay down my life and reputation on the PM's sincerity …You can't fake it. He's determined to make a difference and that's great.''

But that’s the point — Tony can and does fake it. Indeed, Abbott himself has cautioned that you can’t always believe him. Moreover, he has already blatantly misled Parliament about his promise to spend his first week as PM with an Indigenous community:

This is hardly a firm grounding for trust in his statements about Indigenous matters. One is brought to mind Prime Minister Bob Hawke’s rash and misguided “by 1990 no child will be living in poverty” schtick.

Nevertheless, Gordon offers five reasons for us all to be optimistic  about Tony Abbott’s sincerity and chances of success:

''We haven't got the relationship right, because you would think questions on how we're progressing on closing the gap are questions Indigenous leaders and organizations are intimately bound up with, and are in a significant way responsible for. We're not just spectators here! … The challenge for Abbott will be to put in place a relationship between government and indigenous people that empowers our people to be jointly responsible, with government, for the outcomes.''

‘It is not policy that has not been thought out and developed. Rather it is a justification for getting out the big stick to achieve short term gains, that will look good on the Government's political report card, when the next election comes around.’

Personally, I don’t consider Abbott’s ‘Closing the gap’ speech holds the flicker of a candle to Rudd’s shining ‘Apology to the Stolen Generations’ speech.

Nor does the invocation of Abbott’s arch nemesis, PJ Keating, lend credibility to his professed lightbulb watershed moment.

Abbott began his closing of the gap speech, declaring his admiration for Keating and his famous Redfern Park speech. Keating does not return the admiration. Having called Abbott, “an intellectual nobody,” in an interview on ABC, he then declares:

“...if Tony Abbott ends up as prime minister of Australia, you’ve got to say: God help us. God help us!”

So what does the latest utterance of Tony Abbott convey?

Indigenous issues have, apparently, been ranked by Abbott as being as important as stopping the boats, fixing the budget, and building the roads. But this is not all that reassuring, considering the insensitive, gormless, ham-fisted, way Abbott has gone about pursuing those goals so far. Are we to infer that he will provide employment for Indigenous Australians on the road building chain gang or in the mines?

For Tony Abbott, the plebeian poor are pawns to be moved around like pieces on a chessboard. Those left without work by the closure of Holden, he suggests, may obtain work in fasttracked South Australian road projects or in Coles supermarkets.

They have, after all, been liberated from their jobs.

The target of increased Indigenous attendance at school sounds good, but if schools don’t make changes to engage students’ interest, truancy officers will not solve the problem.

So says Chris Sarra, chairman of the Stronger Smarter Institute, which aims to reverse low expectations in Indigenous education. Sarra says students are more likely to skip school if they are not interested.

Getting kids to school will only work:

"If executed in a way that is strength-based, not assuming that the problem lays entirely with the families or community."

She writes that punitive measures for truancy, do not address the barriers to Indigenous children attending school. These can include hunger, malnutrition, overcrowded housing, family violence and racism. But Abbott’s approach to problems is not renowned for nuance or subtlety.

His ‘stop the boats’ campaign has created havoc in the region and may only have pushed the problem and the people back to poorer countries. It has been simplified to ‘baddies’ [smugglers] and their ‘gullible’ customers. Refugees are not recognised as seeking asylum by this new policy. Operation Sovereign Borders has been veiled in secrecy, at the expense of accountability and human rights.

Will this crude conceptualisation of complex human problems be taken into Abbott’s focus on Indigenous children’s school attendance? Will it become a war on truancy? Will there be punishment for ‘uncooperative’ parents? Abbott has form in this type of approach, with his childish ‘goodies and baddies’ paradigm being ridiculed throughout the world.

But the most damning part of Abbott’s speech lies in the flagrant chutzpah of these words.

“There is no country on Earth where people are made more welcome. There is no country on Earth whose people have more innate generosity to others. Yet for two centuries – with fragrant [sic] exceptions, of course – Australians had collectively failed to show to Aboriginal people the personal generosity and warmth of welcome that we have habitually extended to the stranger in our midst.”

These words are chilling, for their shameless, delued deception.

We are not showing warmth to the stranger, as Prime Minister Abbott claims. In fact, in our name, Abbott’s Government is treating men women and children fleeing persecution with appalling cruelty. Australia does not welcome refugees or offer them safety. We push them back into the sea. We send them back to the horrors from which they have fled. We incarcerate, injure, threaten and destroy them.

Secondly, Abbott speaks of our failure to offer warmth and welcome to Indigenous people.

By this Abbott claims that it is white Australia welcoming a stranger to these shores. That’s right — a stranger?

Indigenous people have lived in this land for at least 60,000 years — to suggest they are strangers in this country is beyond idiotic and embarrassing and strays into being downright offensive.

It is white settlers who became the strangers in another people’s land. It is the white people who stole the land and committed the murders and took the children from their mothers. It is us, white people, who are the violent invaders — who did not deserve to be welcomed.

Clearly Tony Abbott has not heard, or understood, the words of Paul Keating, or Kevin Rudd, or the cries of Indigenous people.

Whatever makeover, or watershed moment, he claims to have undergone is superficial at best — a mere speechwriter’s correction.

The tone has the ring of

“some of my best friends are Aborigines, but…."

Merely uttering words does not remove ‘hardness of heart’ or engender the capacity to walk in the shoes of another.

Indigenous people may be better off, Tony Abbott, if you do not give them your personal attention, after all. 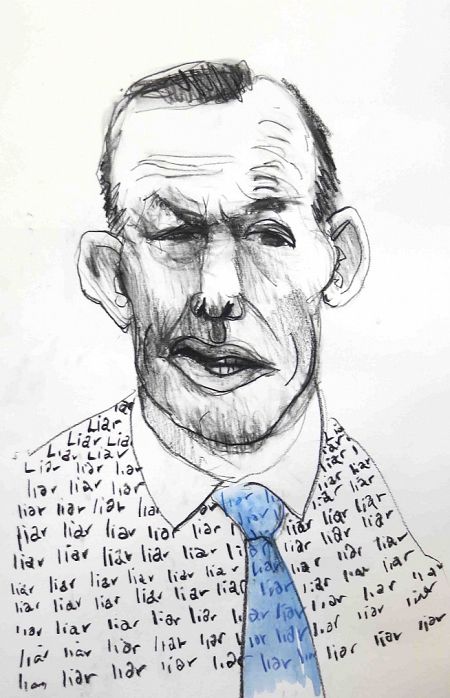