Silver linings playbook: Four good things about the election for the ALP

Many Labor supporters are heartbroken about the Federal election result, but Michael Galvin says they should take heart, finding four positives for the ALP from Saturday’s schemozzle. 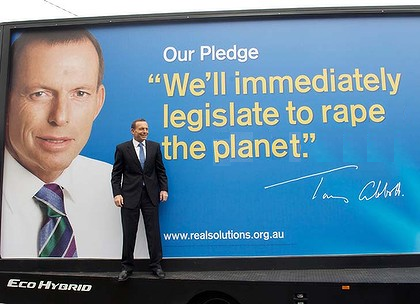 1. ABBOTT HAS NO MANDATE

On Saturday night, Abbott told us proudly that the country is under new management.

True. But the election also showed clearly that Abbott has no mandate for changing the business of which he now sees himself as the general manager.

The relatively small size of the swing, its variable distribution, and the role of other factors ‒ not least, Labor’s leadership dysfunction ‒ all point to an important fact: Labor’s policy record and agenda were not repudiated at this election. Abbott wanted a referendum on his proposals. He did not get the result he needed to claim any credible mandate.

If Labor wants to return to the Treasury benches faster than it did during the Howard era, it needs to pick up the policies it used in government since 2007 and run with them, not away from them.

It is also important to note that Labor achieved about 47 per cent of the vote, despite one of the most malicious campaigns against it from the MSM ever seen in Australian history. This shows that the MSM is not as important as it used to be. Without social media, this swing might have been double what it was. This is a very good sign for the next election. Social media neutralised the MSM at least to some extent at this election and will do so to a much greater extent at the next election. Here, as in America last year, the influence of right-wing MSM on the middle ground is inexorably waning.

Labor does not need at least two terms before it can win again. It is close enough to win the next election rather comfortably.

2. CANDIDATES MATTER MORE THAN EVER

Some Labor candidates actually saw a swing to them last Saturday. Some Liberals saw big swings against them. Social media is making a difference here too. A dud candidate is likely to get more public exposure than they ever dreamed of — most of it negative and ridiculing. It is surely a good thing that the quality of actual candidates is making a bigger difference than before.

I think my experience in the electorate of Hindmarsh is relevant here. My emails over the years to my local member, Steve Georganas, received no response whatsoever — not even an acknowledgement of being received. (In contrast, I am still receiving courteous emails from Malcolm Turnbull years after I wrote to him about some matter while he was opposition leader).

Does it surprise me that the swing against Labor in Hindmarsh was twice as bad as in neighbouring electorates? Not really, if my experience is anything to go on.

This is the best news from Saturday. Labor’s best team largely survived, and are ready to start the fight against Abbott from Day One. (I am excluding from this analysis the former ministers who retired at this election). And, even better, it is a young team and a new political generation.

Labor has been the first of the major parties to move beyond the politics and preoccupations of the baby boomer generation. The Liberals and the Greens are still stuck there — Abbott obviously so, albeit in a negative way. His political formation was as a counter-revolutionary fighting the decadence ‒ fashion, as he saw it ‒ and left wing excesses of the 1960s and 1970s. He is still tilting at those windmills.

Baby boomers – especially those who were politically active in their youth – are past their political use-by date (and I count myself in that number). Time to let the bright and committed 30 and 40 somethings work out new answers to new problems. And the Labor side is now far better placed in this regard than the Coalition or The Greens. No surprises, then, that Albanese did so much better than the Greens in Grayndler for this very reason; just as Bandt did in Melbourne — generational change.

4. THE TRAUMA WAS REAL, NOW MOVE ON

There was something unsettling, but revealing, about watching Rudd’s long concession speech on Saturday night. I felt like I was watching a train wreck in progress. The happiness and smiles were utterly inappropriate to the occasion. Rudd had just led Labor to a bad loss; he had just been kicked out as Prime Minister of the country; millions of people who depend on Labor had just had their life opportunities seriously diminished. The ebullience and demeanour he displayed on Saturday night was inappropriate, but also telling.

Was he looking happy because he felt immense relief?

It certainly appeared so. But what was the greatest relief? Could it have been the knowledge that he had done better than Gillard would have done, that Labor’s defeat would have been worse under Gillard? I suspect so. Is it possible that the pleasure this knowledge gave him was greater than the pain of being thrown out of office? If so, how could this be so?

Watching this concession speech, I saw a man who at the very centre of his being cannot clearly distinguish himself from the “great” Labor party itself, or from the “great” country itself. A man who cannot conceive of a fissure between these imaginary identifications. The Party, c’est moi. The country, c’est moi.

I thought about what it must have been like for him three years ago, when he was summarily taken out and shot without warning, and with a minimal level of due process, let alone courtesy. It must have been unbearable, intolerable, unimaginable. It suddenly became clear to me why he could have plotted against Gillard from the start with a good conscience — to restore what is right and proper, to get self, party and country back into proper alignment.

Gillard wouldn’t, or couldn’t, see the Pandora’s box she had opened up, and she paid a heavy price for this misrecognition, this lack of foresight and lack of imagination. Outing Rudd for her was a normal process in the hard game that is politics. But she could not anticipate that for Rudd ‒ and for many others who identified with him as the leader who loved them, who got rid of Howard and brought Labor back ‒ it was an existential crisis, a wounding that could not heal.

Neither Abbott nor Rudd mentioned Gillard in their speeches on Saturday night. I expected no better of Abbott. He knew the hatreds he had stirred up for that woman, and any spontaneous hissing from a drunken young Liberal at the mere mention of her name would have spoiled the message of the evening somewhat.

But Rudd’s neglect to mention her name was more complex.

On one level ‒ in the fairy tale in each us, where we want happy endings and satisfying closure ‒ it would have been nice if they could have kissed and made up (so to speak) on this final moment before the curtain came down.

But Rudd couldn’t do it.

What happened between them was a tragedy, and tragedies don’t have happy endings. Rudd’s final speech finally confirmed for people out there ‒ people like me ‒ a sense of the wound, the trauma, at the heart of that relationship for most if not all of the last six years. It was perversely satisfying to realise, at last, that the pain and torment was “really real” — not made up by a sensationalist mainstream media.

Is it really so surprising that 3.5% of voters decided that this Rudd/Gillard/Rudd leadership trauma was too much to bear any longer?

I don’t think so. True believers might wish to think that these turncoats were or are only motivated by selfish, xenophobic reasons. But that response only shows that true believers have a problem of their own — an easily touted moral superiority towards people who do not think or vote like them.

15 May 2019, 12:00pm Prime Minister Scott Morrison may be on track to lead the conservatives to an ...
Join the conversation
comments powered by Disqus
News updates