Senator Eric Abetz has been criticised for asking Chinese-Australians to denounce the Chinese Community Party during a Senate Committee, writes Peter Henning.

WOULDN'T IT BE NICE if Sarah Cooper did a lip-sync covering the career of Tasmanian Senator Eric Abetz? Just a ten-minute take covering Abetz’s 26-year senatorial career, highlighting his much relished and cherished role as the Liberal Party’s “Great Communicator” — the ever-reliable frontman for John Howard, Tony Abbott and now Prime Minister Scott Morrison whenever they needed to present the essentials of “policy” in the clearest possible way by creating disunity, division and inequality.

The best place to start is difficult to know. But let’s begin with Abetz’s most recent representation of Liberal policy in all its values-laden glory, bearing in mind that it is just the most recent example of how Abetz has consistently served a dual purpose of satisfying his LNP bosses and promoting his own career.

In the Senate Foreign Affairs, Defence and Trade References Committee on 15 October, where three Chinese-Australians were providing information to the Committee, on invitation, Abetz said this:

“Can I ask each of the three witnesses to very briefly tell me whether they are willing to unconditionally condemn the Chinese Communist Party dictatorship?" 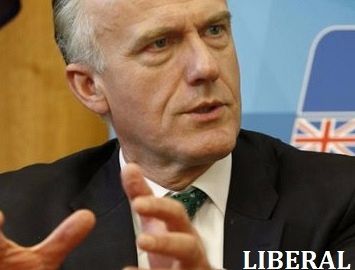 Eric Abetz vs Scott Ludlam and Larissa Waters: Why the s44 double standard?

Why did Scott Ludlam and Larissa Waters resign from Parliament over holding dual citizenship, but not Eric Abetz?

He did not ask other people who provided information to the Committee the same question, but singled out the Chinese-Australians on the basis of their ethnicity. In general terms, this is clearly an extension of the Morrison Government’s active support for the Trump Administration’s determination to begin a new Cold War with China and to turn the clock back 50 years, foregoing years of investment in dialogue, diplomacy, negotiation and trade as the most effective tools in international relationships.

The behaviour of Abetz has been described in a number of reports as a revival of 1950s McCarthyism in an Australian setting. McCarthyism refers to the hysteria whipped up in the United States 70 years ago when Wisconsin Republican Senator Joe McCarthy began his infamous witch hunt of political opponents in universities, the media and government institutions by smearing them as communists or “fellow travellers”, while simultaneously pursuing a vindictive crusade against other people on the basis of their sexual orientation.

McCarthy was ultimately censured by his senatorial colleagues in 1954 and his reputation now lies in tatters, but his relentless use of the U.S. Senate to exacerbate tensions between the Soviet Union and the West and to create internal divisions within the U.S. was very successful in hardening Cold War enmities.

We can certainly do without echoes of McCarthy’s voice, values, demagogic self-promotion and deliberate malicious social division being reincarnated in Australia. But consider this — Abetz’s questions had nothing to do with the Committee’s purpose and function.

And further, when one of the shocked recipients of Abetz’s inquisition stated that he didn’t support the Chinese Communist Party, Abetz rejected this response, saying:

“There’s a difference between not supporting something and actively condemning a regime that engages in forced organ harvesting and having a million Uighurs in concentration camps — the list goes on and all we have is this limp statement that we don’t support it.” 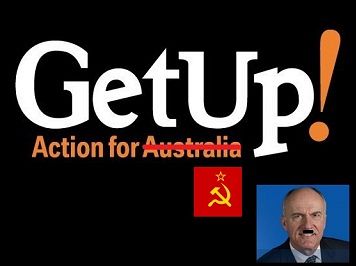 DON'T PANIC! Eric Abetz has now got those Cold War spies at GetUp! in his sights, so everything's going to be fine.

How does this sit with Abetz’s statement in 2008 that:

“...most reasonable Australians would regard any attempt to slur me by association [with his convicted war criminal great-uncle, Otto Abetz] as completely unfair and if I might say so, un-Australian.”

Furthermore, let us go to 2014 when the current Chinese President, Xi Jinping, visited Australia while Tony Abbott was Prime Minister and Eric Abetz was Minister for Employment.  Before Xi’s visit, Abetz issued a media release, welcoming it as ‘an opportunity to showcase Tasmania’ to both Xi and the people of China, adding that ‘China is Tasmania’s largest trading partner and I welcome the opportunity to promote not only trade but also Tasmanian tourism’. No comments then about Chinese persecution of Uighur people or anyone else. The only signs of opposition to Xi’s Tasmanian visit were from conservationists and a small group of Tibetan-Tasmanians whose protest was supported by the Tasmanian Greens, including Nick McKim, a strong political enemy of Abetz.

The difference between 2014 and 2020 is not due to a sudden concern for human rights in LNP ranks, but its utility as a weapon in the current political environment where China has replaced Islamism as the new bogey on the never-ending carousel of needing conflict to achieve relevance.

In fact, the period from 2001 to 2007 must have been political heaven for Abetz, with the Howard focus on so many divisions to exploit a perfect fit for him. What could be better than unconditional support for the Bush-Cheney “shock and awe” in the Middle East, the glorious victory over the Tampa refugees, the refusal to apologise to the “stolen generations” of Aboriginal children, the cultural warfare against teachers and nurses in the public sector and all unions which failed to water down wages and conditions, the attempted implementation of union-busting legislation and, most of all, the transformation of vast regions of Australia into monocultural agribusiness “managed investment schemes”, especially in bulk woodchip plantations in Tasmania?

Let’s call it a compendium of “shock and awe” on multiple fronts, none of it productive, constructive, unifying and altruistic in social, economic and environmental terms and all of it hugely damaging to Australia and Australians except for the wealthy carpetbaggers. 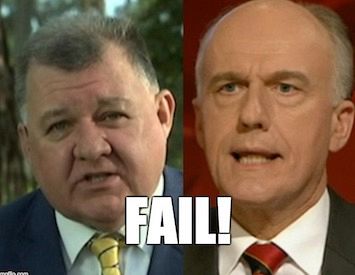 73% of Australians wrong according to climate denying COALition

Does the Coalition really think it is on the right track by ignoring 73% of the Australian public on climate change?

In 2006, Howard appointed Abetz as Minister for Fisheries, Forestry and Conservation — a macabre rather than ironical combination of “responsibilities”, for Abetz was no conservationist. Abetz’s main job was to get Gunns’ Pulp Mill up and running in the Tamar Valley north of Launceston, using the opportunity to describe campaigns to stop it and to stop the industrial clear-felling of native forests for woodchips as “akin to treason”.

There was a lighter side to Abetz, to be sure. In an interview for The Catholic Leader in 2016, he named up ‘the key principles of Judeo-Christianity that make it the ideal ethical perspective to guide society’ as:

‘Servant leadership, individual responsibility, compassion, reward for effort, rehabilitation, paying a worker a fair wage, honesty, integrity, respect for each other are all biblical injunctions. Societies based on the Judeo-Christian ethic are the envy of the world. There is a reason for this. It’s the best.’

As Employment Minister in the Abbott Government between 2013 and 2015, Abetz was compassion personified, as is well known, especially in rejecting any increase in unemployment benefits to people who should be writing 40 job applications a month. “Asking somebody to seek a job in the morning and one in the afternoon is not too much to ask," said Abetz.

After all, as he always is fond of saying, one way or another, he judges “people on the basis of who they are, what they are, how they are”, and if they’re unemployed, oppose his views on war, refugees, same-sex marriage, pulp mills and industrial logging, being “agnostic” about climate change science – among a whole host of other requirements denoting “otherness” – then they can be variously described as “un-Australian”, “anti-Australian”  and even Nazis or people who Stalin, Hitler and Mao would be proud of, all mixed up together in the same big judgement bowl.

But I somehow doubt that even the brilliance of Sarah Cooper would have much fun in trying to retrieve an ounce of satirical humour from the grimly sectarian, woefully bitter negativity and bleakly landscaped vision of Abetz’s senatorial career.

Back in 2015, when Abetz used the racist term “negro” to describe a Black American Supreme Court judge, his Tasmanian senatorial colleague, Jacqui Lambie, said he should “quit Parliament with whatever dignity he has left”.

But Abetz remains, a clear and continuous representative of the magnificent bankruptcy of identifying Australian “values” with the socio-economic “values” of neoliberalism and medievalism and – let it be said assertively – the environmental “values” of vandalism.

18 February 2022, 7:00am Capturing and accurately articulating the oafish, offhand, casual brutality of the ...

7 October 2021, 11:00am Australia has practically ceded its defence strategy and policy to the whims of the ...
Join the conversation
comments powered by Disqus
News updates