Queensland Deputy Premier Jeff Seeney referred Clive Palmer to the Corruption Commission over an alleged attempt to influence Government policy, so why has he not referred Sibelco and Premier Campbell Newman in comparable circumstances? Barristers Stephen Keim SC and Alex McKean report.

They shall call the people to the mountain; there they shall offer sacrifices of righteousness: for they shall suck of the abundance of the seas, and of treasures hid in the sand
~ Deuteronomy 33:19

THE SANDS of North Stradbroke Island have long been a political battlefield.

Once again, the treasures hidden in those sands are at the centre of Queensland politics, perhaps forming a quagmire into which political careers could vanish without a trace.

In 2011, the then ALP Government legislated to extend mining on the Island at the Enterprise mine until 2019. This was achieved by legislatively renewing particular expired mining leases, side-stepping the usual application and decision process and extinguishing the judicial review rights of native title claimants, environment groups and others who had objected to renewal (North Stradbroke Island Protection and Sustainability Act 2011 (Act No. 11 of 2011)) *

Sibelco, the Belgian family-owned company now operating the mines, made an undisclosed donation of over $90,000 to the LNP campaign in the seat of Ashgrove, won by the Premier in 2012.

Sibelco engaged the PR firm, Rowland, to engage in an aggressive campaign against the decision to end sand mining in 2019. The Rowland report on the campaign showed 98,980 personalised letters were sent to ‘key mainland suburbs’ between February and April 2012 in the ‘Straddie Mothers’ campaign.

The Queensland Electoral Commission confirmed on 21 March 2012 that it was urgently investigating Sibelco’s involvement in the letter-writing campaign. One of the ‘Straddie Mothers’ had told The Australian that she had been asked by Sibelco to write the script, which was then printed on the letter and sent out to thousands of Ashgrove residents.

Sibelco’s disclosure to the electoral commission in October 2012 was incomplete — omitting reference to cinema advertisements, flyers and social media campaigns.

Budget estimates hearings in 2013 revealed that Sibelco had met with the Government eight times in two months, but had only met with the native title holders – the Quandamooka people – once.

It was also revealed that Sibelco created a ministerial briefing paper on how the legislation extending the mining leases should be framed. A pre-Cabinet circular was also discovered, seeking permission to put Sibelco’s plans into practice.

The amendments to the legislation, eventually introduced and passed by the Newman government, will allow sand mining to be extended until 2035, provided Sibelco applies for renewal in 2019. Again, this approach side-steps the usual application and decision process and extinguishes the rights of the native title holders and anyone else who may have sought to review any approval. The Newman amendments also allow Sibelco to mine outside the restricted mine path imposed on the large Enterprise Mine in 2011, between now and 2019.** 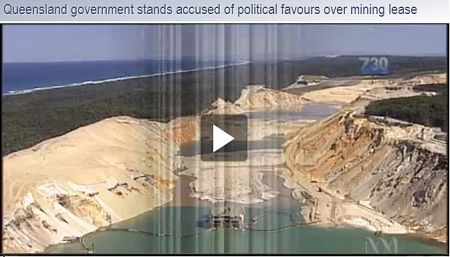 Quandamooka elders last week launched legal action in the High Court seeking to have the Newman Government’s amendments declared invalid on the basis of inconsistency with the Native Title Act 1993 (Qld).

While these allegations were flying around last week, Deputy Premier Jeff Seeney referred Clive Palmer to the Crime and Corruption Commission (“CCC”) over allegations that Palmer sought exclusive access to develop the Galilee Basin from the newly minted LNP Government in April 2012.

Seeney said Palmer gave him a draft Bill that

"... would give him the exclusive right to build a port and a railway and have control of the Galilee Basin."

Seeney said he believed it would have been corrupt to give Palmer "specialist treatment" on the basis that he had been a supporter of the LNP. Seeney said he refused to look at the draft Bill, which he said would have bypassed the proper processes of government.

It does not appear that anyone has referred the matter of Sibelco and the Premier to the CCC. Of course, the structural changes the Newman Government has introduced into the new CCC may impact on any potential investigation.

A person lodging a complaint to the CCC would be required to swear a statutory declaration setting out the complaint [Section 16(3) of the Crime and Misconduct and Other Legislation Amendment Act 2014 (Qld) (CMOLAA), introducing new section 36(3)]. The penalties for making a complaint which is found to be made: vexatiously, not in good faith, primarily for a mischievous purpose, recklessly or maliciously, is $9,350 or 1 year imprisonment.

The entire membership of the PCMC was sacked in November 2013. The fate of Dr Chris Davis, former LNP member for Stafford, shows the price of dissent in the Newman regime and stands as a warning to any of the four LNP members of the PCMC, should they refuse to ratify the Attorney’s choices of chairman and CEO.

The CEO of the CCC also has the power to discipline CCC officers, where the CEO is reasonably satisfied the officer has, inter alia: performed their duties carelessly, incompetently or inefficiently, been guilty of misconduct or contravened a direction given by a responsible person [s62 of the CMOLAA, introducing new s273B].

Looking at these two potential investigations, it is not difficult to see the sensitive and important nature of decision making by officers and commissioners of the newly named, CCC. It is easy for members of the public to gain the impression that the passage of legislation by members of Parliament is an academic exercise that does not have much impact out there in reality land.

These two events, where donations have been made and potential legislation is alleged to have been discussed, show legislation can, potentially, make private fortunes.

In the Sibelco case, legislation did cement the financial future of a Belgian-owned company for decades into the future. If, as Mr. Seeney says, the presentation and passing of legislation to create private advantage in the context of previous donations of funds for campaigning can amount to corruption, it is crucially important that the CCC’s officers and leadership are patently independent and able to conduct their investigations and make their decisions fearlessly, frankly and without any suggestion of favour.

The legislation passed in early May 2014 does not guarantee the CCC will deliver that high standard of independence and fearless decision making.

Editor's notes: * In a previous version of this article, this paragraph incorrectly stated that the legislation was to end sand mining on the Island by 2019, not extend it. The subsequent sentence was added for clarification.

** In a previous version of this article, this paragraph read, incorrectly: 'The amendments to the legislation, eventually introduced and passed by the Newman Government, extended sand mining until 2035 and side-stepped the usual application and approval process, extinguishing the rights of the native title holders and anyone else who may have sought to review any approval.'

Please alse see a subsequent clarifying article on this issue by Richard Carew.