The new social services minister, Scott Morrison, has been warned that parents are scouring Centrelink’s brochures to get their school-leaving kids onto welfare. John Maycock investigates then why the minister is spending money researching the efficiency of these brochures.

AN article published in the Brisbane Times on 14 February 2015 headlined as 'New Social Services Minister Scott Morrison shows his colours', informed us that:

‘Scott Morrison says he is a fixer, not an ideologist, as he flags a kinder, gentler approach to welfare and families policy.’

‘declared he is not ‘wedded ideologically’ to the government's controversial dole and pension budget measures and says he does not want to be ‘combative’ in his new portfolio, a move that flags a more pragmatic approach to families and welfare policy for the Coalition.'

The article further suggests that:

‘I have no need or interest or desire to take this policy area into a combative space.' (emphasis author's).

Another vile divisive headline from the Telegraph.Keeping the Dole Bludger Myth alive for over half a century #auspol pic.twitter.com/WNTbT3Ko5S

Now the article could be unpacked to reveal its ideological content, however, I would rather draw your attention to an article published by the Daily Telegraph on 29 January 2015 and the Courier Mail print edition on 30 January 2015 headlined respectively as:

‘Bludgers shop for welfare not jobs’

Though the following statement is not attributed to anyone, the article initially makes the point that:

‘Parents are using Centrelink brochures as catalogues to find an income for their children who leave school and want to walk straight into a welfare centre.’

My first reaction to this was:

Aren’t those brochures there to inform people of their entitlements? Weren’t the brochures introduced to streamline services at the front counter? And, aren’t Centrelink customers encouraged to use those brochures?

Further, according to the article:

‘Senior government bureaucrats have briefed new social services minister Scott Morrison on the growing practice of parents taking their children to Centrelink to find a way of earning a living off welfare.’

This, too, is not attributed to anyone.

It appears that Morrison is again quoted, stating his desire to introduce a ‘welfare cop’ to apparently

‘…police potential rorters of welfare and ensure taxpayer money is not being spent on bludgers.’

and expressing his concern that:

‘…children [are] going from the school gate to the welfare gate.’ 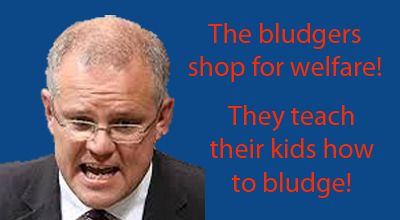 Even here though, it is hard to discern what Morrison said and what the article’s author said, but no matter, that is how the MSM operates it seems.

Morrison is then quoted from a 2GB radio session where he said:

‘One of the things that concerned me most was when I was told that at the end of school what happens each year is too often we see parents come in to Centrelink with the Centrelink brochure as if it’s some sort of catalogue.’

‘The first place people go, for some, is to see what welfare they can get onto.’

When Morrison reminds us that:

‘Every benefit we pay and every dollar we pay out has got to be paid by the taxpayer.'

it becomes obvious this narrative is another stereotyping vilification of people on welfare, driving division in the community via the “combative space” of public opinion.

However my second, and more important, reaction to this was to ask:

What information did those bureaucrats have for Morrison? What kind of research/survey were they working from? And, has Morrison “twisted” information to suit his own agenda?

The briefing had to be sourced from somewhere, but what type of research would reveal what Morrison claims is going on? I came to the conclusion that it would have to have been a survey of the efficiency of the brochures themselves — do customers make use of the brochures?

I don’t know the answer to this but a hint can be found in a Courier Mail report from the 8 February 2015, ‘Madness’: Federal government spends almost $5 million dollars just on market research’.

This article reveals that one of the research projects was to discover:

‘…whether welfare recipients are getting good customer service at Centrelink shopfronts.'

‘…$560,000 was spent to determine whether Department of Human Services clients, including welfare recipients, are satisfied with the customer service they receive.'

This sounds very much like the efficiency of the brochures was canvased, especially considering that in the article:

‘Finance Minister Mathias Cormann defended the investment in market research, but said all departmental expenditure would be monitored and further cuts imposed where appropriate.’

‘the Coalition had already eliminated wasteful and necessary (this seems like a mistake here – unnecessary?) spending on advertising and public affairs including a $43 million reduction across agencies.’

If this research is where Morrison’s briefing came from and his agenda is to cut spending, then it stands to reason that he may want to get rid of the brochures (they probably are a huge cost and almost unnecessary with all the same information available online).

However, it would appear Morrison did not get the results he was looking for – that the brochures are a waste of money – but rather, the brochures are a great help and that people are better informed when they reach the front counter (I am surmising here).

But (if what I suggest is so) here’s the rub. When Morrison didn’t get the results he wanted, allowing him to declare the brochures a waste of money in order to dump them, he chose to turn the findings into a negative, vilifying those who use the brochures and tying them directly to the welfare bludger meme, which, in a public domain afflicted with generalising, affects everybody on welfare. Morrison has to know this is the case and he has to have known that he was entering “combative space” .

“Can Morrison have changed his ideology in two weeks, or is he taking a softer approach for other reasons?”

And the answer may be found in the background to the article first quoted, ‘New Social Services Minister Scott Morrison shows his colours’, where we learn that:

‘…despite his "tough guy" public image, several welfare and community groups have said Mr Morrison has been surprisingly easy to deal with. They have talked about his openness to new ideas and enthusiasm for the portfolio.’

The discourse Morrison has been injecting into the “combative space” of public opinion since he took over Social Services would not have cut it with these people and he surely knows that.

Morrison may have changed his rhetorical colours when dealing with people who know better than he, but should that be taken as an ideological change? Doubtful!

Indeed, just as using the brochures has come back to bite welfare recipients, these welfare/community groups may find their polite conversation with Morrison comes back to bite them — the context twisted to suit Morrison’s ideology and injected into that “combative space”.