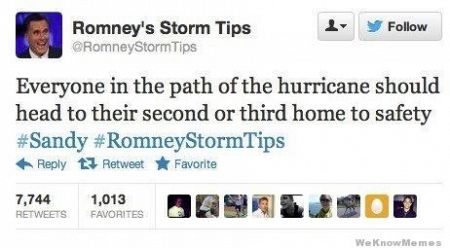 SUPERSTORM SANDY gave politics what one might call a watershed moment this week, in America and elsewhere.

It showed Global Warming was real. It showed Big Government was necessary. It re-elected Obama and stalled the Tea Party’s venomous fervid momentum and made a Republican President unlikely (the party having lost for good and all the nervy, fecund Latino vote) in the next twenty years.

It also dealt a body blow to Capitalism itself (can the free market sort this? how?) and may mean JFK’s genial brawling Boston Catholic soup-queue benevolence comes back to American thinking. It certainly showed the insurance business should be wound up (Mother Nature being so big and brutal and stormy) and replaced by a Federal Damage Assessment Bureau which pays people back without fuss for those losses they have suffered in fire or water or wind. It may even empower Obama to extend to all citizens the free health benefits enjoyed by SEALs, Marines and army nurses.

It has certainly changed the political game, and the rules by which it is played and the war-cries of its right-wing leaders. Is government still the problem, not the solution? Is it still wrong to ‘throw money’ at social damage, or is it a good idea?

Romney dare not even visit New Jersey now, nor ‘reach across the aisle’ to even his party pals Chris Christie and Michael Bloomberg. He dare not offer ten million of his own, which he could afford, to rebuild the Boardwalk or the merry-go-round or the sets of Jersey Shore. He will have to keep mumbling he likes FEMA now, but cuts made elsewhere must fund the good work it is doing; the books must be somehow balanced, money doesn’t grow on trees.

Sandy has shown how cruel the capitalist impulse is.

Gina Rinehart gets two million an hour, but not a dollar of it can go to an old woman whose house was washed away. Wilson Parking makes a million a day, but not a cent of it goes to rebuilding or repairing suburban railway lines. A one-bedroom Sydney flat costs half a million dollars, but no cent of the price helps care for a demented mother, or an autistic child ― the property developers’ hundred thousand profit is more sacred than any merciful good it might do.

It shows that Obama, who tried to get an anti-global warming Carbon Price through, was right and Abbott, who battled bitterly to cancel one, was wrong. It shows what winds and waters are looming that will smash our shores if the air is not cooled, nor the gas fires quelled, nor the volcanoes quenched, by concerned Big Government action and death duties on the rich in the coming months and years.

It shows him vowing to end the world ― not a good look in 2013, when the proof is in, and the peril growing with every electric storm, tsunami and nuclear meltdown.

Sandy was the October Surprise of this presidential year (in 2008 it was the Wall Street Meltdown) which ended, I think (I hope, I pray),  the vile Neo-liberal interim in Western history and returned us, probably, to the decent Keynesian sanity of the 1950s, 60s and early 70s (‘We are all Keynesians now!’ Richard Nixon bayed in 1971) before Murdoch brought us Thatcherism and all the bright barbarities that followed and killed, perhaps, half a billion children with its greed, neglect, and no-fly zones and dirty drinking water.

It was a long time coming.

Prove that I lie.