Renewables and storage will crush coal way ahead of Finkel's forecast

Finkel Review aside, a new Bloomberg report illustrates the impact of renewables and battery storage on fossil fuel generation will soon be crushing and inevitable. Giles Parkinson reports.

A MAJOR NEW SURVEY has pointed to the inevitable decline in coal generation, as the ongoing plunge in wind and solar costs make those technologies significantly cheaper than even refurbished coal-fired generators.

The report by Bloomberg New Energy Finance (BNEF) comes in the middle of the debate around Australia’s energy future, prompted by the Finkel Review and attempts by the Turnbull Government to find a way to prolong the life of Australia’s coal fleet.

But the BNEF analysis suggests that this will be futile and counterproductive — and more expensive. The costs of solar will continue to plunge to around $US26/MWh (AU$34/MWh) by 2040 and wind will not be far off, at $US32/MWh (AU$42/MWh). 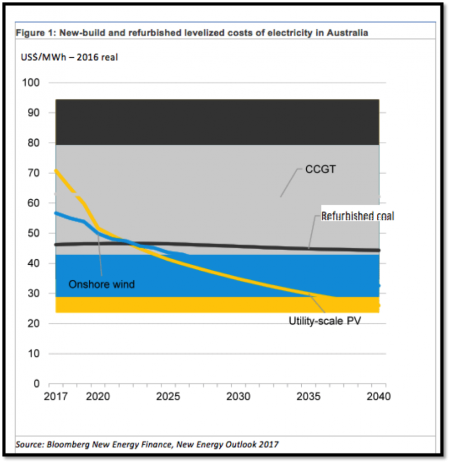 This compares to the expected costs of $US44-47/MWh (AU$58-62/MWh) to refurbish and extend the life coal-fired generators beyond 50 years, as proposed by the Coalition under the guidance of the Finkel Review’s modelling.

It underlines a central message of the Finkel Review — that the cost of wind and solar, and battery storage, is significantly cheaper than fossil fuels, and that reducing emissions and switching from fossil fuels to renewables will also reduce costs.

The BNEF analysis simply points out the difference is even greater and the scale of falling prices even more rapid, than contemplated by Finkel.

This year’s report shows that renewables and storage are set to transform Australia’s energy supply faster and at a lower cost than the Finkel review anticipates.

Coal’s competitive advantage is fast evaporating. It cannot compete with renewables on cost, and storage and smart management of the grid have made the need for new baseload redundant. Coal is yesterday’s technology – the only thing new coal has going for it is inertia.

It adds to the growing assessment that the clean energy target being contemplated by the Coalition Government, in light of the Finkel Review, is little more than business as usual. A new analysis from The Australia Institute suggests it will deliver less renewable energy than current state-based targets, while a Climate Council report also underlines the lack of competitiveness of coal.

BNEF sees Australian coal capacity falling by two-thirds to 2040 as renewables and storage crush the economics of the fossil fuel. This compares to the Finkel Review modelling of 25% of demand being met by ageing brown and black coal generators out to 2050.

BNEF expects an influx of consumer driven storage to help meet the need for firm capacity, an element that gets scant mention in Finkel, although it was central to the CSIRO network transformation work it did in conjunction with network owners. 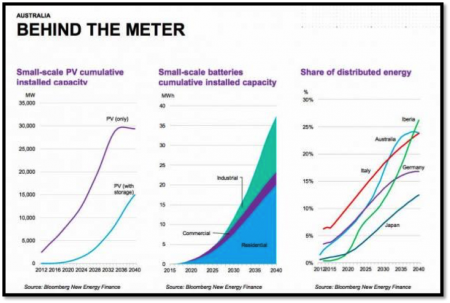 It predicts battery storage capacity will grow to at least 16GW by 2040, with 15GW installed by households and businesses behind the metre, which in turn limits the amount of new gas required and pushes coal capacity down to just 9GW by 2040.

It says that system security will come from pumped hydro, such as Snowy 2.0, batteries, some gas and demand response.

In a further deep contrast with the modelling done by Jacobs for Finkel, BNEF says that solar will outstrip wind energy installations, with large and small-scale solar reaching 72GW by 2040. Half of all capacity will be “behind the meter”, flagging a fundamental shift from centralised to distributed generation. 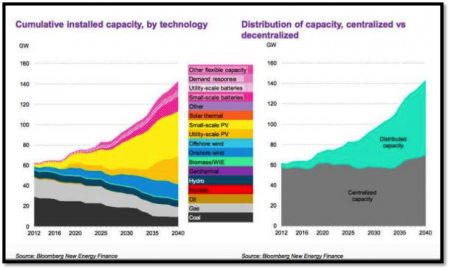 'The analysis shows that Australia’s power sector is rapidly re-orienting from a centralised and fossil-fueled electricity grid to a highly distributed and predominantly renewable system.'

Although this transformation is forecast to take place based purely on economics, this does not circumvent the need for robust energy and emissions reduction policy in Australia:

'A credible, stable and durable policy regime is essential to achieving and orderly transition, facilitating the most efficient investment and keeping costs for consumers as low as possible.'

BNEF also predicts that electric vehicles will make up around 45% of all new car sales and 42% of the total fleet by 2040 — and this will account for some 11% of all demand.

The simple economics of the fall in wind and solar and its impact on fossil fuel generation will take Australia to the bottom edge of its current climate target — a 26% reduction in emissions below 2005 levels by 2030.

But it says if the Paris process moves global economies closer to a 2°C pathway, Australia will need to pledge a deeper emissions reduction target than this and actually put some policies in place.

Interestingly, BNEF puts the share of renewables at 42% by 2030 — the same level as Finkel suggests with the clean energy target that elements of the Far Right are fighting within the Coalition.

Renewables and storage make up 81% of all new capacity additions to 2040, comprising the majority of the US$88 billion (AU$115 billion) invested in new power plants. 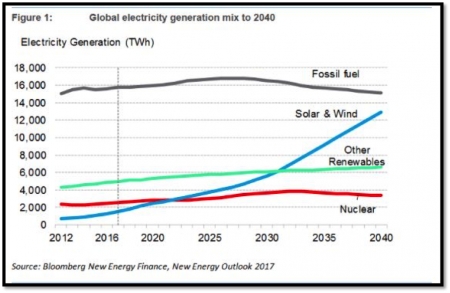 For the global scenario, BNEF's London-based analyst Seb Henbest says in the report:

' ... the greening of the world’s electricity system is unstoppable, thanks to rapidly falling costs for solar and wind power, and a growing role for batteries, including those in electric vehicles, in balancing supply and demand.'

Solar and wind dominate the future of electricity with US$7.4 trillion (AU$9.7 trillion) invested in new renewable energy plants by 2040; China and India are a $US4 trillion (AU$5.2 trillion) opportunity for the energy sector; batteries and new sources of flexibility bolster reach of renewables; and homeowners’ love of solar grows.

By 2040, rooftop PV will account for as much as 24% of electricity in Australia, 20% in Brazil, 15% in Germany, 12% in Japan, and 5% in the U.S. and India. This, combined with the growth of utility-scale renewables, reduces the need for existing large-scale coal and gas plants.

NEO 2017 is the result of eight months of analysis and modelling by a 65-strong team at Bloomberg New Energy Finance. It is based purely on the announced project pipelines in each country, plus forecast economics of electricity generation and power system dynamics.

It assumes that current subsidies expire and that energy policies around the world remain on their current bearing.

It's a clean environment. Subscribe to IA for just $5.