Reasons to be hopeful for a Joe Biden victory

Polls are leaning towards a Democrat victory in the upcoming U.S. Election, ending the circus that has been the Trump Presidency, writes George Grundy.

BACK IN THE 1980s, New York mafia boss John Gotti earned the nickname “the Teflon Don” because no matter what the law threw at him, nothing ever seemed to stick. Yet while Gotti seemed invulnerable for years, his biography is of a man they couldn’t get — until they did. Gotti’s crimes finally caught up with him and the Teflon Don died alone in jail.

Yet, just as his good luck avoiding COVID-19 eventually ran out, with a couple of weeks until America’s Election there are signs that Donald Trump’s Teflon coating may be wearing thin.

America’s electoral college system means nationwide numbers often lack relevance, but it’s been hard to ignore polls that consistently show Joe Biden with a commanding lead these final few months. Some suggest Biden is ahead by a 57-40 margin. A blowout.

No American president has ever won a second term if a recession occurred in the election year and the COVID-19 crisis has caused America’s biggest economic contraction since the Great Depression. Some figures suggest up to 26 per cent of Americans are currently unemployed. Wildfires have ravaged the west. Over 220,000 Americans are dead, in great part because of Trump’s criminal mismanagement of the pandemic.

It’s a mess and unlikely to improve under a President who so clearly lacks the intellectual capacity to understand the virus, let alone control it. In normal circumstances, Trump would have no chance.

Trump’s steadfast allies in the Republican Party are also not immune to political reality and are showing signs of taking to the lifeboats. Maintaining support for the President is one thing, but polls show incumbent senators in states like Maine, Georgia, South Carolina and even rural Iowa trail their Democratic rivals. The Senate is very much in play and if Mitch McConnell loses his precious majority, all Republican hope is lost.

Despite four long years where it has felt like the coin always landed on the wrong side for progressives, Trump has much less power than he would have you believe. If Trump was omnipotent, he would have no need for burdensome elections. If Republicans didn’t fear the people, they wouldn’t work so hard to suppress their votes. If foreign interference was decisive, the Democrats would have been unable to gain historic wins in the 2018 mid-term elections. The Earth is still round, the sky still blue.

The significance of the upcoming U.S. Election spans beyond the borders of America and affects all those wanting a more positive future.

There are other indicators that salvation may lie ahead. The COVID-19 crisis has meant that historic numbers have chosen to vote early or by mail, bypassing the snarled traffic of election day (a working day, when poor people often struggle to leave work to get to the polls). At least anecdotally, early voting appears to indicate a tidal wave of people willing to wait in line for hours to cast their vote against Donald Trump.

Trump’s appalling presidency means this election is in great part a personality referendum and likely to see the highest voter turnout in modern American history. More turnout is traditionally good for the Democrats. Low turnout in 2016 took the presidency from Hillary Clinton. That’s not going to be an issue this time.

Money wields enormous influence in American politics and entering the home straight, Joe Biden holds a phenomenal war chest of $432 million. This takes place as the Trump campaign, which appears to be nearly out of money, increasingly spends its advertising budget more widely than originally anticipated, with states like Texas getting too close for comfort.

Political momentum is like gold dust in the late stages of a campaign. In mid-October 2016, Hillary Clinton led Trump by over six per cent, but the noise and insanity of Trump’s rallies sucked up the media’s oxygen and Trump improved his popularity a crucial four points by election day. The opposite has been the case since Trump’s disastrous first debate performance last month. The gap is widening. The wind is not at their backs this time.

There are challenging days ahead. Trump is going to turn the insanity up to 11. His surrogates will court ever-increasing outrage with their lies and antics. The U.S. Postal Service has been tampered with. Fake ballot boxes are being installed in clear defiance of the law. Republicans will likely pull every possible stunt, legal or otherwise, to deceive, delegitimise and disenfranchise. The possibility of civil unrest is very real and foreign actors will almost certainly try to exert malign influence. 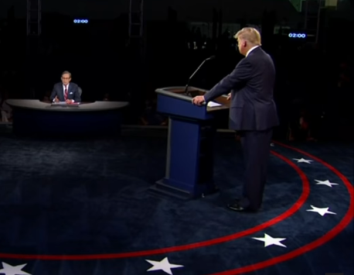 Yet there is hope. Trump consistently trails Biden by a wide margin nationally and across many of the battleground states. Voter lines, polls and anecdotal evidence show a dramatic swelling of support for Joe Biden. Trump’s super-spreader rallies increasingly look like a man preaching to the converted rather than outreach to those undecided. He’s rolling out 2016’s greatest hits, with Mexicans paying for walls and Hillary Clinton’s emails, but there aren’t any hits on the new album and the old schtick is wearing thin.

Joe Biden carries none of Hillary Clinton’s baggage. He may be the calmer waters the American ship at sea now seeks.

Republicans have spent nearly four years sinking political capital into this one-man madhouse. Success and power have proved an aphrodisiac they couldn’t wean themselves from, but the saviour’s light is dying and as election day grows closer and the polls warn of a wipeout, there may come a moment when they finally break.

These have been terrible times for America — the ‘times that try men’s souls’, to quote another writer in revolutionary times. Donald Trump is by nearly every measure the worst President in American history. If he manages to retain power, he will cause American democracy irreparable damage. It’s really frightening.

But gravity caught up with the Teflon Don in due time, and Trump – whose entire life has involved failing upwards – might finally be facing a situation he can’t negotiate his way out of. There are reasons to be hopeful.