Update from Vince O’Grady about the letter sent to the Queensland Police asking for Mal Brough to be investigated over alleged crimes relating to Ashbygate. 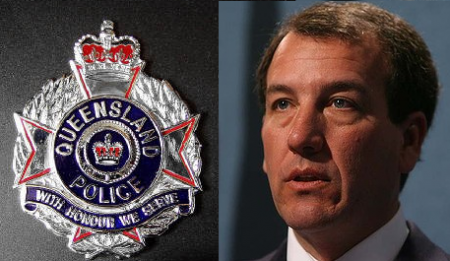 YOU MAY RECALL that on 25 January 2013, Independent Australia sent a letter to the Commissioner of Police for Queensland.

We can now reveal that in actual fact we sent two letters to the Police Commissioner because we made a mistake in the first letter.

The mistake was that we included the link to the Fran Kelly interview of Brough twice.

The letter was resent, with the mistake corrected:

Subsequent correspondence from eminent legal people have now pointed out that we also referred to a wrong section of the Act.

We stated section 30 of the Act, but we’ve have had it pointed out to us that it should have been section 7.

Again, a mistake easily made, because when you search the internet for the Queensland Criminal Code you see that there are, in fact, two Criminal Acts.

The oldest is the Queensland Criminal Code and was passed in 1899.

One might assume that the youngest Act is the law — but one would be wrong. The current legislation is the 1899 Act.

(1) When an offence is committed, each of the following persons is deemed to have taken part in committing the offence and to be guilty of the offence, and may be charged with actually committing it, that is to say—

(a) every person who actually does the act or makes the omission which constitutes the offence;

(b) every person who does or omits to do any act for the purpose of enabling or aiding another person to commit the offence;

(c) every person who aids another person in committing the offence;

(d) any person who counsels or procures any other person to commit the offence.

(2) Under subsection (1)(d) the person may be charged either with committing the offence or with counselling or procuring its commission.

The “other” Criminal Code Act of 1995 says the following:

Who are parties to an offence

(a) actually does the act that is the offence; or

(b) does an act to enable or aid anyone to commit the offence; or

(c) aids anyone in committing the offence; or

(d) counsels or procures anyone to commit the offence.

(a) committing the offence; or

(b) counselling or procuring its commission.

(4) Subsection (3) applies even if the person who actually does the act does not commit an offence.

We do not know why the 1899 Act is law and the 1995 Act is not. Whatever the reason, it does not change the fact that Malcolm Brough, James Ashby and Karen Doane have, prima facie, committed offences against the Queensland Criminal Code.

However, that mistake was the author’s and not that of the person who gave us the advice about the sections of the act which may have been compromised by Brough Ashby and Doane.

A person who attempts to obstruct, prevent, pervert, or defeat the course of justice is guilty of a crime.

And then there is the matter of theft:

390 Things capable of being stolen

(2) A person who takes or converts anything capable of being stolen is deemed to do so fraudulently if the person does so with any of the following intents, that is to say—

(a) an intent to permanently deprive the owner of the thing of it;

(b) an intent to permanently deprive any person who has any special property in the thing of such property;

(c) an intent to use the thing as a pledge or security;

(d) an intent to part with it on a condition as to its return which the person taking or converting it may be unable to perform;

(e) an intent to deal with it in such a manner that it can not be returned in the condition in which it was at the time of the taking or conversion;

(f) in the case of money—an intent to use it at the will of the person who takes or converts it, although the person may intend to afterwards repay the amount to the owner.

It seems to me that the Actions of Brough, Ashby and Doane constitute stealing and they should be arrested charged under this offence and bailed to appear at a Magistrates Court in order to answer such a charge.

(a) if the property was obtained by way of an act constituting a crime—14 years imprisonment; or

(b) if the property is a firearm or ammunition—14 years imprisonment; or

(c) if the offender received the property while acting as a pawnbroker or dealer in second hand goods, under a licence or otherwise—14 years imprisonment; or

(2) For the purpose of proving the receiving of anything it is sufficient to show that the accused person has, either alone or jointly with some other person, had the thing in his or her possession, or has aided in concealing it or disposing of it.

Once again, it seems to me that there is a Prima Facie case against this section of the Act.

Having been a police constable in the UK in the 1970s before emigrating to Australia, I am well aware of the processes which need to be gone through to prove any of the above  offences.

As a police officer I have had to have a knowledge of the law relating to that offence.

The law in Victoria is exactly the same as the Law in the UK in relation to theft.

Queensland is slightly different, but essentially the same.

You have to look at the wording of the offence and see if the circumstances of the case fit that wording. If they do, then you arrest and charge; if they do not, then you have no power to arrest.

If you make a mistake about what you think as a police officer, there is a safety valve — in fact several. There are your specialist officers (detectives); there are your senior officers, to review the evidence and, lastly, there are the solicitors who ultimately decide whether a charge has any chance of being successful in court.

So, what should be done in this case?

One would hope that the Commissioner has passed the complaint onto his detective branch.

Essentially, they would know what evidence needs to be looked at to see if a case needs to be answered under the Queensland Criminal Code of 1899.

They have quite a good supply of evidence which is very safe. It is in witness statements produced before the Federal Court of Australia. In fact, Brough and Doane were compelled by subpoena to answer questions about communications between them and to produce documentary evidence.

Once the detectives have made up their mind that there was theft of the Slipper diary pages, then they need to charge James Ashby, Karen Doane and Mal Brough with those offences.

They have two methods of doing this:

These are issues which would need to be argued in a court of law.

Take Craig Thomson, a sitting member of Parliament, who was a Labor MP, but who now sits on the Independent benches. He was arrested by seven police officers under a warrant which clearly stated incorrect information.

It stated that Thomson had refused a summons. This was shown to be untrue.

After the arrest, he was charged and then strip-searched and then appeared before a magistrate, who gave him bail.

His imminent arrest was reported in the Murdoch press the night before by none other than Steve “Scoop” Lewis. Scoop may also have questions to answer under the Queensland Criminal Code and his dealing with Mal Brough and the Slipper diary.

He was charged with an offence of dishonesty under Victorian Law.

Then take Peter Slipper, a sitting MP who used to be an LNP member until he resigned after taking the Speaker’s chair on 24 November 2011.

He was sent a summons to appear at Canberra Magistrates court for three offences of dishonesty under Federal law. Scoop had been after him for about 2 years at that time.

Why wasn’t he arrested by seven police officers and strip searched?

Was it because they hadalready destroyed his reputation.

Are the police forces of Australia cherry-picking their arrests?

Get up to date on our full investigation at our dedicated Ashbygate page: