Artist and activist Carl Scrase says we cannot condemn the Russian persecution of Pussy Riot, unless we look at our own Government’s treatment of Julian Assange. 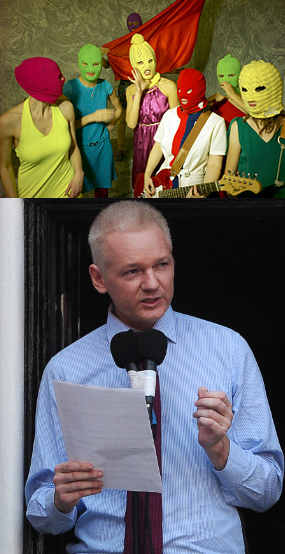 I have been a huge supporter of Pussy Riot, but late last week I came to the realisation that we, as westerners, cannot condemn Russia for persecuting the radical arts while our own government is implicit in the unlawful witch hunt for Julian Assange — not unless we analyse both with the same vigour and enthusiasm.

The mainstream media has lapped up the opportunity to paint Russia as evil authoritarians with the assertion that we are free and enlightened. I urge all the well-meaning Pussy Riot supporters that are adopting the fantastic punk feminist aesthetics of the Russian activists to be aware that there will be some that try to manipulate their protests for the purposes of pro-West dogma.

I commented in a few Australian Pussy Riot online forums over the weekend. I felt it necessary to remind people that Julian Assange is Australian, he is a radical artist of the highest order and has been left out to dry by the Australian government. There were lots of people liking and a few negative comments.

On Sunday night, Assange stood on the balcony of the Ecuadorian embassy and echoed my thoughts. He supported Pussy Riot and called for a united stance against global oppression. Assange said:


"There is unity in the oppression, there must be absolute unity and determination in the response."

This is a worldwide systemic problem that is bought about by the rule of power and men. We need to stand as one social movement to bring in a new way of being. There will always great support for Pussy Riot from Assange fans. I hope there will also be some colourful balaclavas at the next action in support of Julian Assange.