THE COALITION’S NERVES are showing through its taut, white, brittle skin.

Not even the twin furies of Rupert Murdoch and Clive Palmer could save its Queensland bacon.

One Nation went into the abyss with it, James Ashby ranting at the television cameras in disbelief, betrayed by his own venality.

COVID-19 and the border had a lot to do with the ALP’s trashing of its opposition, but the stench of corruption around the LNP and its lickspittle One Nation played a crucial part.

Australians are showing a decreasing tolerance for corruption and right now there are two stand-out offenders — the Federal Government and the NSW Government.

The NSW Government, as we are finding out thanks to the NSW ICAC, is a cesspool of undisclosed love trysts, betrayal of injured workers, attempted tree-rat obliteration, crumbling highrise, perverse roadway monopolies, irreparable damage to water supplies, willful destruction of parks across the state — and that’s just for starters.

If you are not holding your hand out in NSW, you are either stupid or just not trying.

As for the Federal Government, its broad sweep of corrupt activities and personalities is way too long for this article. Put it this way, it runs from “A is for Angus” to “Z is for Zed”.

Sensing the public mood with all the finesse of a dog trying to fly, Attorney-General Christian Porter dug up the same bone the Coalition had been gnawing on the year before, buried because it was fly-blown.

This from the Parliament of Australia website in April 2019:

‘Having previously resisted calls for an NIC, the Government announced in December 2018 that it would establish a CIC and released a consultation paper on its proposed model.’

Nothing has changed since then. If anything, the bone is even less flavoursome.

Marking the release of the proposed bill for the new body “with greater powers than a royal commission”, Mr Porter confirmed at least half a year would be needed for consultation.

“That will obviously be amongst the public sector, civil society, stakeholders, all of the states and territories,” he said.

“It's a complicated piece of legislation.”

It might be complicated, but it is actually very simple.

The proposed legislation would be a weapon for the Morrison Government and, given the way Labor is making a botch of things, that could be a couple of election cycles yet.

Apart from its many other horrors, the proposed legislation would deliver the Government’s hand-picked operatives the coercive power to summon witnesses and compel evidence.

They might collect this evidence by phone tap or other covert law enforcement activities.

The CIC is designed, from the ground up, to be a Star Chamber in which political dissidents would be intimidated to bend to the will of the Liberal Party. 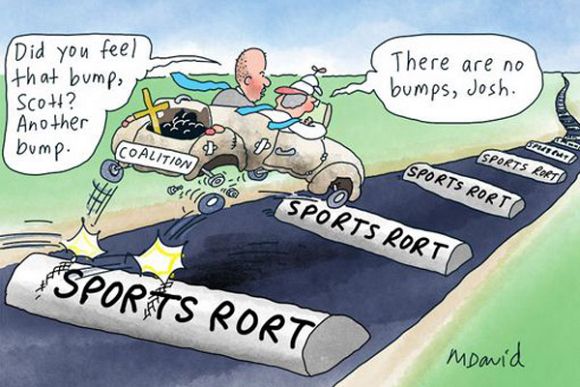 Accountability is missing from the Australian Government

Members of the LNP have been getting away with a series of scandals and illegal activities with the aid of the mainstream media.

The Coalition has tried to hide this deeply anti-democratic aspect which, handily enough, would protect corruption by those in the know.

‘Under the Government's model, the public sector division would prepare briefs to pass to the Commonwealth Director of Public Prosecutions, which would then pursue matters in court.’

Then there is the secrecy. Everything needs to be kept a secret. The fact of a referral is a secret, any investigation is a secret, the commissioner’s opinion as to the existence of corruption is a secret and the referral to the Department of Public Prosecutions is a secret. And if the DPP declines to make a decision, no one will ever know anything about the issue.

There has been widespread criticism of the proposed legislation, mostly based on the fact the CIC would do nothing to prevent corruption and would even encourage it.

Worse, though, it would be a tool of repression.

It is possible Labor might win the next election and this proposal will meet the fate it deserves.

On the other hand, the Coalition could win both Houses then push this Soviet-era tool of repression through to fruition.

We cannot afford to let this happen.

In a related matter, an application to register Federal ICAC Now (F.I.N.) as a political party has been lodged with the AEC.

This application included the electoral details of over 500 F.I.N. members.

The AEC approval process takes around 12 weeks, so it was initially expected F.I.N. would achieve recognition in January 2021.

But the AEC threw a spoke in the wheel.

This is the email sent to F.I.N. members:

I refer to correspondence sent on 23 October 2020 to Federal ICAC Now (the Party) acknowledging an application for registration under the provisions of Part XI of the Electoral Act.

On 26 October 2020, the Speaker of the House of Representatives, the Hon Tony Smith MP, issued a writ for a by -election to be held on 28 November 2020 in the federal electorate of Groom. Section 127 of the Electoral Act provides that:

During the period commencing on the day of the issue of the writ for a Senate election or a House of Representatives election and ending on the day on which the writ is returned, no action shall be taken in relation to any application for the registration of a political party, including any action by the Administrative Appeals Tribunal in respect of a decision of the Electoral Commission that relates to such an application.

The purpose of this letter is to advise you that the AEC will be unable to undertake any furtheraction on an application for registration while the Groom by-election is being conducted.

TheAEC will contact you when work can resume on the Party’s application for registration.If you have any further queries contact the AEC on 02 6271 4552 or email fad@aec.gov.au.