Productivity and the myth of labour market 'flexibility' 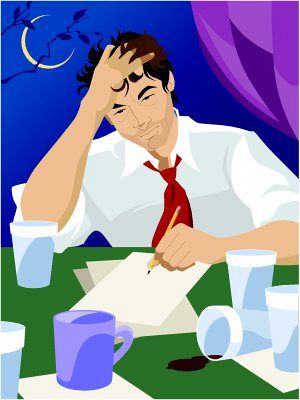 Increased productivity is all about working smarter — not harder

ON A DAILY BASIS, we hear representatives from big business, industry and employer groups, free market lobbyists, neo-liberal economists and conservative politicians talking urgently about the need for the labour market to be given more of what they call “flexibility”.

The need for more flexibility has been advanced so effectively, on so many fronts, and been reported in the media so often, that it has now assumed the status of economic orthodoxy — and an article of faith amongst conservative politicians and their big business urgers. In truth, the drive for flexibility is much more an ideological than an economic imperative.

We first need to understand what that harmless sounding word “flexibility” really means in the context of employment.

Flexibility in the labour force is, indeed, important because it means not having useless and restrictive conditions that are of no real benefit to workers or their employers, and which “gum up” the productive process. Indeed, in Australia, the old system of state awards often included these sorts of unproductive and inconsistent employment conditions, which were frequently a complicated burden for employers operating across state boundaries. However, under the simplified uniform national award system we have in place in Australia after the roll-back of WorkChoices, this would not appear to be an issue in this country any longer.

Without this being a factor, “flexibility” is instead code for employers wanting to pay their employees less, increase their hours, decrease or eliminate paid overtime, remove their penalty rates and other entitlements and, above all, make it easier for workers to be dismissed. In other words, flexibility is a nice way for employers to frame their fervent desire to claw back the gains workers have made over the last century or so — the ones that have made Australians have one of the highest average standards of living and quality of life in the world.

The plutocrats will say it is all about enhancing "competitiveness". What this really means is that politicians and business-people have been looking out at the sweatshop manufacturers of Asia and noting that Australian businesses pay their workers more than Chinese and Indonesian businesses pay their menial workers. That makes our labour market "uncompetitive", so the argument goes.

Well, they're right – in a way – we can’t compete with Asia on wages. But then again, we shouldn't want to and nor should we need to.

Improving productivity is not, in truth, about making your workers work longer hours for less pay.

'US and UK have much longer working hours than Continental Europe—this will inflate the figures on productivity in these countries if it is not accounted for.'

Productivity is, in fact, the measure of output from a production process, per unit of input, or GDP per hour worked.

And, despite working longer hours, according to the following OECD graph for 2007, the US and the UK are below much of continental Europe for productivity:

One element of increasing productivity might be working harder, but another far more important element will, of course, be working smarter. Labour “flexibility” was shown, in a survey of manufacturing growth and performance in Britain, to be just one of ­six factors relevant to productivity:

“The factors affecting labour productivity or the performance of individual work roles are of broadly the same type as those that affect the performance of manufacturing firms as a whole. They include: (1) physical-organic, location, and technological factors; (2) cultural belief-value and individual attitudinal, motivational and behavioural factors; (3) international influences – e.g. levels of innovativeness and efficiency on the part of the owners and managers of inward investing foreign companies; (4) managerial-organizational and wider economic and political-legal environments; (5) levels of flexibility in internal labour markets and the organization of work activities – e.g. the presence or absence of traditional craft demarcation lines and barriers to occupational entry; and (6) individual rewards and payment systems, and the effectiveness of personnel managers and others in recruiting, training, communicating with, and performance-motivating employees on the basis of pay and other incentives. The emergence of computers has been noted as a significant factor in increasing labor productivity in the late 1990s, by some, and as an insignificant factor by others, such as R.J. Gordon. Although computers have existed for most of the 20th century, some economic researchers have noted a lag in productivity growth caused by computers that didn't come until the late 1990s.”

As merely the fifth out of six factors mentioned affecting productivity growth, the question needs to be asked: why do employers seldom ever mention the other five?

The answer is, businesses want their workers to work harder and longer because that saves managers the effort of trying to make them work smarter.

As someone who has been highly successful working all around the world helping businesses to work smarter, rather than harder, I feel I can speak with confidence when I say that removing people’s award conditions and entitlements is simply not the way to increase productivity. Australians are already extremely hard workers — ones I would rank at the top of nations I have worked — a list which includes Britain, the US, France, Germany and Switzerland. Most Australian workers can only work so much harder before mistakes creep in, work does not get done and they become demotivated. Indeed, making people work harder and longer for the same reward is a sure way of demeaning your employees, creating low-morale and engendering ill-will against the employer. It is, in fact, an almost certain way to lower productivity.

There is a point of diminishing returns in trying to make people work harder.

It would seem that the desire for increased workplace “flexibility” is an ideological goal based on classical free market economics. At its heart, it is the desire to make Australian labour as cheap as overseas labour — including India, China and the rest of the third world.

To go one step further, in my experience, the hardest workers are not necessarily the most efficient workers. This is because the person who enjoys drudgery and working up a sweat is often the one who works hard simply for the sake of it. The lazier worker is the one who will try to innovate to get the job done with the minimum of resistance and effort — which is the essence of productivity.

Instead of working harder and longer – the true meaning of workplace “flexibility” – the best way to increase productivity is by paying people well, giving them good conditions and empowering them – treating them like adults – by giving them responsibility and authority over their work. Trying to get maximum work for minimum pay is a false economy, as people’s performance and attitude drops off and they, for example, start raiding the stationery cabinet on a daily basis.

The maxim is simple: treat people well and, usually, they will treat you well back. Treat them like children and expect tantrums and bad behaviour.

Australians already work some of the longest hours in the world, many of which they are not paid for. Trying to extract more from employees is not only socially undesirable — but it is also wrong-headed. We need to work, not harder, but smarter and there are huge productivity gains available in virtually every workplace if the will is there to achieve it.

There has been much soul-searching recently about the decline of manufacturing. But it is plainly obvious that the problem with manufacturing is not that we have relatively highly paid employees (though we do), but rather that this country is a wasteland in terms of innovation and, in particular, automation.

Japan and Germany, for instance, are first world economies with a relatively highly paid workforce that still manage to maintain a huge and buoyant manufacturing base. They do this not by having rows of people placing sprocket A in hole B all day long, but rather by making huge investments in productive capital. It is said that in many manufacturing industries in Australia, there has been little significant capital investment since the 1950s. Furthermore, Japan and German don’t let humans do repetitive tasks — they give these jobs to machines, which do these sorts of tasks more accurately, efficiently and faster than humans ever possibly could. If you refer to the below table, in 2009, Japan and Germany led the world in industrial robots — Japan had 332,720 and Germany had 144,000. 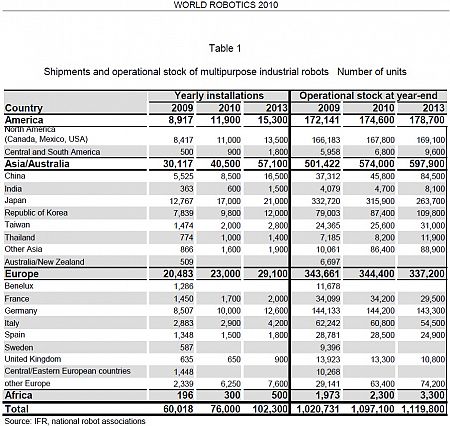 Australia, however, was not even in the top 10 countries in the world in terms of the number of industrial robots it had, having a mere 6,697. If we don’t use the best technology, how on earth are we expected to compete on level terms in manufacturing? Why are Australia producers unwilling to move outside their comfort zone and embrace change? Moreover, why do they expect their employees to shoulder the competitive burden?

The reason, of course, is simply because it is free market economic ideology which, as we discussed in part one and two, primarily serves to increase the gap between rich and poor.

It astonishes me to hear about Australian manufacturers bemoaning the high cost of labour and talking about moving their factories offshore. Yes, labour is expensive here, but labour is only one of a range of costs that make up the unit cost of production. Australia also has immense scientific and research capabilities through world-class universities and organisations such as the CSIRO. Innovative industrialists should be harnessing this natural competitive advantage to make their production facilities state of the art and seamlessly efficient. Moreover, Australia is blessed with an abundance of natural resources, in particular those staples of manufacturing, iron ore and coal, as well as textiles such as cotton and wool, which should make the production of Australian goods cheaper than it would be for those countries that need to freight in those commodities — often from Australia. This competitive advantage is rarely mentioned by manufacturers.

Australia has all the ingredients to develop a strong manufacturing base. It doesn’t need to do this by trying to produce labor intensive industries to compete with Asian sweatshops — doing so would tear apart the fabric of our society. It can compete, instead, through technological innovation and by using the locally produced commodities and resources Australia has in abundance. We have set our sights too low — we can create more than merely a quarry economy by value-adding at the source.

Trying to increase productivity through so-called “flexibility” is fool’s gold— all it is likely to deliver is poorer quality of life, more latch-key children and, inevitably, social unrest. This is the sort of thinking that led businesses to stop calling employees “workers”, but rather to dehumanise and commodify them as so-called “human resources”.

We are meant to be the clever country, let’s use our brains to develop our productive potential, not try to bully Australian workers into working harder, under worse conditions, for less reward.