PRESS GALLERY REPORT: Is Turnbull's leadership running out of energy? 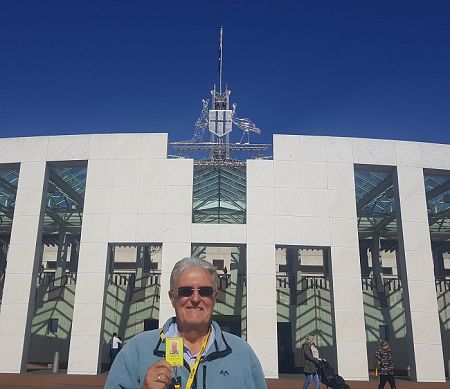 WHAT A DAY to start reporting from the Press Gallery!

The place was alive with talk of a leadership challenge to Prime Minister Malcolm Turnbull from Home Affairs Minister Peter Dutton, yesterday (20 August). It really shows the bankruptcy of conservative politics in Australia today that the battle for the prime ministership is between a cave-in and a cruel authoritarian.

Turnbull is probably safe for now to continue his bumbling leadership. Dutton does not have the numbers — yet. More Turnbull bumbling might change that. Not only that, but there are reports now emerging that Dutton may not be eligible to sit in Parliament, due to a pending pecuniary business interests issue.

EXCLUSIVE: ICYMI - here is my report on the Constitutional questions hanging over #PeterDutton. Two top legal experts say his childcare businesses could disqualify him from Parliament after changes to funding regime. pic.twitter.com/kP4P8vrl2b

All during question time, the nightmare of Peter Dutton hung over members on both sides. Labor was content to let the leadership remain in the background. Sort of. The leadership issue was the bad smell at the party. It hung around and no amount of kicking the dog was going to remove the supposed source.

One Labor backbencher brought giggles from her side when she referred her question to the "current Prime Minister". After the Prime Minister finished with a stock standard answer about lower energy prices and lower taxes under his Government, the Speaker told the House questions to ministers had to be direct and not coloured with introductory words. So much for Labor’s "current" PM tactic.

Labor’s main focus was on energy policy, but its questions were delivered through the prism of leadership tensions and the recalcitrant climate change deniers in the Coalition. Opposition Leader Bill Shorten’s first question was along the lines of whether the Prime Minister could confirm that he was not legislating on climate change in order to save his own leadership.

Further questions from the Opposition Leader elicited an admission from the Prime Minister that the legislation would only be introduced when the Government had the full support of its own backbench. Turnbull tried to make this out as a consequence of only having a majority of one in the House and being in a minority in the Senate.

However, ongoing questions from Shorten and other Labor members revealed the weakness in this argument. Turnbull is beholden to the reactionary rump in his party on both climate change policy and challenges to his leadership. After all, former PM Julia Gillard led a minority Government in both the House and the Senate but she managed to get a swag of legislation through.

Was Julia Gillard the most productive prime minister in Australia's history? | News | The Guardian https://t.co/vRD9nA3gWb

Shorten pursued a theme — the five climate change policies Turnbull has developed over the years, including three in the last week on the National Energy Guarantee (NEG). He asked the Prime Minister when Labor could expect to see the NEG legislation. In a series of exchanges between Shorten and Turnbull, with the Prime Minister repeating the cheaper energy slogan, the PM told the Opposition Leader he would see it when the legislation had the support of all Government members.

A situation – not coloured by a leadership debate – that would have been enough to bring the threat of a few Coalition members crossing the floor to vote against the various iterations of the NEG that we have seen so far, has destroyed having any policy at all — no matter how inadequate the 26% target is.

.@David_Speers: Would you support legislation you had not seen? @ScottMorrisonMP: They (Labor) know what's in it, all this 'I haven't seen the papers' is an excuse.

Instead, the Government of free enterprise will somehow pressure the big energy companies to lower prices to households and businesses, according to Treasurer Morrison, by waving a "big stick". Treasurer Morrison also blamed the Labor Party for the Government's inability to pass energy policy. Maybe the time for price controls at a state and territory level is the way to go. Over to you, Labor states and territories.

Turnbull has now ditched any reference to the 26% target — or indeed any targets. Even big business is annoyed with this cave in. It wants certainty and, with a 26% target that is not a real target, it would have the capacity to continue to emit greenhouse gas emissions and change ever so slowly, slowly — too slowly.

Clearly, this is a Government in disarray. It cannot convince its own members to vote for Turnbull’s signature energy policy. If that is so, why should anyone else vote for this dog’s breakfast?

The time for clearing the decks to allow a government to govern is approaching. The death rattle of this Coalition Government has gone on long enough.

#auspol A sickening irony. Dutton family runs childcare centers while he daily abuses children on #Nauru Leadership twist as report claims Peter Dutton could be ineligible to sit in Parliament https://t.co/EMPFW4sbEq via @theage