What is the point of Malcolm 'Cave In' Turnbull? 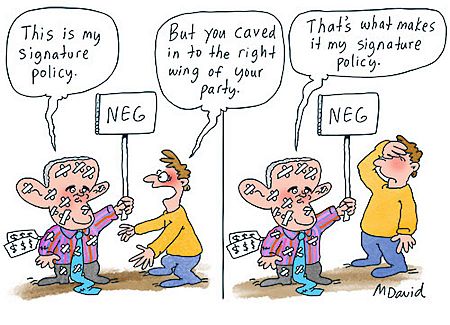 While the Murdoch press is stoking up tensions to undermine the Prime Minister, the simple fact is that there is a hardcore of reactionaries in his party who reject science and climate change.

If this means dumping the Prime Minister to drop even the pretence of climate change policy that is the National Energy Guarantee (NEG), then some of Coalition members, at least – Tony Abbott comes to mind – may well pursue the destruction of their own Prime Minister and Government to achieve that.

So, what is the point of Malcolm Turnbull? After yet another back down to the extreme Right within his Coalition Government, this time on climate change, the answer seems pretty clear. He stands for nothing, other than to remain in power.

Turnbull is a salutary lesson in the pitfalls of managing capitalism in the two-decade-long decline of profit rates globally. In Australia, that decline began after the collapse of the mining boom.

The graph below shows the stabilisation of profit rates after 1997 (and even an increase due to the neoliberal policies of the Howard Government and the intervention of the Rudd Government in the GFC) but the tendency of the rate of profit to fall) reasserting itself in 2013. 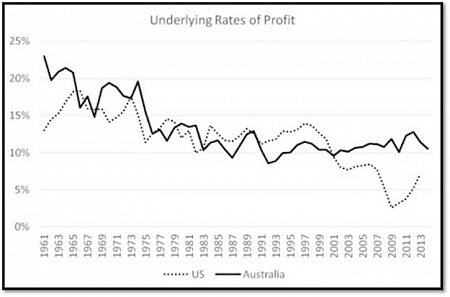 The latest Turnbull NEG sell-out debate has reignited tensions. Instead of putting the target of a 26% cut in carbon dioxide emissions by 2030 into the NEG legislation, the back down proposal is now to have the target set in an executive order – seemingly similar to a regulation – but with the Australian Competition and Consumer Commission (ACCC) and the Australian Energy Regulator (AER) mandated to report on the impact on energy prices any increase in the target would have.

Why has Turnbull sold out this time? There were up to ten Coalition backbenchers and ministers who reserved the right to cross the floor if the 26% target was included in the NEG legislation.

The extreme Right’s reasons for its position vary among members, but it boils down to a belief that climate change is not real, or that a target will increase the price of energy even more. As well, for them, the problem is the target being in delegated legislation, like an executive order or regulation. They fear Labor would, when in power, increase the target from 26% to their own long-term target of 45%, through the relevant minister or executive council signing off on the increase, without Parliamentary approval.

As previously mentioned, the target will be met more or less through the current Renewable Energy Target (RET) anyway, without further action. This 26% is the target you have when you don’t have a target. It was itself designed to appease the climate change deniers and coal fetishists in the Coalition.

It applies, as RenewEconomy's Giles Parkinson points out,

‘ ... a deliberate brake to the clean energy transition that is upon us.’

The deniers have not been appeased — they have been emboldened. Former PM Tony Abbott said, after Turnbull’s latest back down, that this was "no way to run a government" and that Australia should scrap the Paris deal. Politically, Turnbull is in no position to challenge these forces of reaction. He needs them for the Coalition to remain in power and for him to continue as Prime Minister. There’s the rub.

Now the emboldened extreme Right is apparently supporting Peter Dutton to challenge Turnbull for the Prime Ministership. This is more than just posturing by the climate change deniers and coal fetishists to put pressure on Turnbull to de-NEG the NEG. Dutton has denied he will challenge. In the words of Mandy Rice-Davies, "well he would, wouldn’t he?"

Former Liberal Leader John Hewson summed it up when he told Sky News:

"If Peter Dutton is the answer, you have to ask yourself what the hell is the question."

Dutton is also likely to lose his own seat, held as it is by a margin of just 2%.

Turnbull became Liberal leader and Prime Minister after the disastrous Abbott/Hockey 2014 Budget and the deepening disapproval of the Government and its leader after that. Switching from Abbott to Turnbull was the Liberals’ attempt to have a better salesman for their rotten anti-worker and anti-poor policies.

Rudd to Gillard to Rudd shows that Labor too has not been immune from "change the leader" syndrome in their hunt for someone who can sell neoliberalism.

As I have written, before it is not who is selling the shit sandwich that is the key to understanding the rejection of the Abbott government and now the Turnbull Government, it is the shit sandwich. Turnbull has not changed the ingredients he and the rest of his neoliberal crew are trying to sell us. It is why to date his Government has lost 38 Newspolls in a row.

The disunity and infighting only make it worse for this neoliberal Turnbull Government. The latest Fairfax-Ipsos poll has Labor at 55%, two-party preferred, compared to the Coalition on 45%.

Are there any deckchairs to save? #auspolhttps://t.co/0zMJNy5mCa

A switch in leadership to Minister for Home Affairs Peter Dutton – who was, remember, judged by doctors to be the worst Health Minister in 35 years – is likely to worsen the result, not improve it. He is a one card trick of racism and xenophobia. What is his position on public spending in health, education, transport, wages, employment and so on? We don’t know because he is the Minister for Dog-whistling.

Slogans and wedges from Dutton about Border Protection ("from non-White people") and African gangs – both of which Turnbull now uses, having abandoned principles and embraced the fear campaign of his own right wing and previous leaders – do not improve life for workers and the poor. They do not increase real wages. They do not improve public health, education and transport. They won’t lift three million Australians out of poverty.

All such fear campaigns do is fan the flames of racism and give Nazism an opportunity to flourish. We can see this acceptability jump to the far right from the right in the "ban Muslim immigration" maiden speech of Katter Party Senator Fraser "Final Solution" Anning. Anning is but one of the many children Turnbull and Dutton have spawned — both through their words and their neoliberal policies. Hanson is Howard’s child, fed by uncles Peter and Malcolm.

This means that changing leaders or even changing the Government without challenging and defeating the systemic drivers of neoliberalism, racism and xenophobia, condemns us to repeat history over and over again, the first time as tragedy, the second time as farce.

Our task to make Turnbull powerless must be to defeat racism, xenophobia and neoliberalism by our own collective efforts and in doing that give birth to a strong political Left in Australia, which challenges the old ways of doing things economically, politically and socially.

Quite. Turnbull would have been better off in his former imperious, my-way-or-the-highway mode. Being ‘consultative’ has got him nowhere but into Abbott’s lap. Either way, he’s hopeless at politics https://t.co/QOw3txrPUf