Unwilling to accept defeat or his declining popularity in the polls, President Trump is attempting to sow doubt and division among U.S. voters in a last-ditch campaign to regain control of the political narrative. Claire McMullen reports from Washington.

PRESIDENT TRUMP has a dangerous track record of refusing to hold himself accountable to the American people, as well as the rules and norms of the country he currently presides over. Throughout his presidency, Trump has demonstrated a willingness to subvert the truth, bend the rules, and test the limits of his executive authority to serve his agenda while asserting an image of power and popularity.

Trump’s political strategy – attack, inflame, deflect and walk away – has become increasingly frantic, but there are signs this desperation is only heightening his slide towards election defeat.

His political playbook recycles the same tactic against different adversaries. Whether the opponent is COVID-19, Democrats, the media, Black Lives Matter protesters, mail-in-ballots or a Chinese video app, Trump manoeuvres to blur the truth and deflect responsibility to preserve his self-image as a winner.

The more desperate the President becomes, the more autocratic are his moves. Now he has floated the idea of delaying the presidential election scheduled for November 3 — something he has no legal authority to do.

With Universal Mail-In Voting (not Absentee Voting, which is good), 2020 will be the most INACCURATE & FRAUDULENT Election in history. It will be a great embarrassment to the USA. Delay the Election until people can properly, securely and safely vote???

While only Congress has the power to change the date of the election, Trump’s assertion undermines public faith in an election-vote he is no longer confident he can win. It also lays the foundation for the President to blame a loss on a “rigged” election, making him appear wronged rather than defeated.

“The president has always had kind of a low cunning when it comes to understanding how to control narratives. So this looks like a classic case of calculated misdirection."

Longwell explained that the President’s tweet was an attempt to distract from the “historically bad GDP numbers” announced shortly before the President took to Twitter.

Delay the election or it is rigged, is the implied ultimatum.

The tweet comes on the back of repeated attempts by the President to discredit the use of mail-in-ballots as an alternative to in-person voting. The Trump Administration has pushed a confected narrative that mail-in-ballots will open the floodgates to widespread voter fraud, despite electoral experts citing a lack of evidence for these assertions.

Undoubtedly, this election will have to operate differently due to the significant risks posed by the Coronavirus. More mail-in-ballots are likely to be required and it may take longer to announce the result. In these circumstances, the President sees an opportunity to manipulate how the election result will be perceived. Delay the election or it is rigged, is the implied ultimatum.

Senate Majority Leader Mitch McConnell and Florida Senator Marco Rubio were among a number of Republican leaders who quickly shut down Trump’s suggestion to delay the election.

“I wish he hadn’t said that, but it’s not going to change. We’re going to have an election in November. And people should have confidence in it.”

Prominent Republican and co-founder of the Federalist Society Steven G Calabresi called the tweet “fascistic” and “grounds for the President’s immediate impeachment.”

In a scathing op-ed published in the New York Times, Calabresi wrote:

'President Trump needs to be told by every Republican in Congress that he cannot postpone the federal election. Doing so would be illegal, unconstitutional and without precedent in American history. Anyone who says otherwise should never be elected to Congress again.'

What followed was not a retreat but a slight shift in the President’s stance that offers little assurance he will abstain from attempts to disrupt and discredit a November election and its outcome.

Trump said during a White House press briefing on Thursday:

At the time Trump was suggesting delaying the U.S. election, his Secretary of State, Mike Pompeo, was in a teleconference arguing that Hong Kong’s elections “must be held” on schedule. The following day, Hong Kong Chief Executive Carrie Lam announced that Hong Kong’s legislative elections will be delayed by one year, citing the need to protect public health and a fair election.

Trump’s tweet not only undermines democracy in the U.S. but aligns the U.S. President with undemocratic leaders currently exploiting COVID-19 to expand their political power, including by delaying elections. By wiping away the normative line and diplomatic stature the United States has previously maintained, Trump has walked away from the historic role the US President has played as the so-called ‘leader of the free world.’

In another democracy-corroding manoeuvre, Trump used the law enforcement arsenal of the U.S. Government to storm Black Lives Matter protesters in Portland, Oregon and is threatening a Federal crackdown on crime in other Democrat-run cities, against the wishes of local and state authorities.

Legally, the American Federal Government can enforce Federal laws and protect Federal property without the consent of the states.

Oregon Governor Kate Brown gives a clear response to these questions, denouncing Trump’s “political theatre” and arguing that the Federal intervention escalated tensions on the streets of Portland.

“This is a democracy, not a dictatorship. We cannot have secret police abducting people and putting them into unmarked vehicles. I cannot believe I have to say that to the president of the United States.”

Portland’s anti-racism protests have been ongoing for more than 60 consecutive evenings in response to the police killing of George Floyd. The scale, intensity and even the motivation for the demonstrations grew noticeably following the arrival of Federal law enforcers. Crowds swelled from several hundred people to more than 4,000. Black Lives Matter chants were joined by a chorus of “Feds go home”.

These protests may carve out a place in American history as they offer an insight into how race-relations may be changing. Portland is the whitest city in America. Yet it is hosting some of the largest and longest anti-racism demonstrations in the nation. The majority of Portland protesters are white. While there have been incidents of violence and property damage, for the most part, the people on the street have been peaceful demonstrators, including a Wall of Moms, U.S. Veterans, and Portland’s Mayor, Ted Wheeler.

Through the eyes of some local African-Americans, Portland’s protests spell something of an awakening.

“I feel the most protected than I ever have in my city. White people can’t understand what we’ve been through completely, but they are trying to empathise. That’s a beginning.”

Trump has built-up his strongman image while beating-down Democrat Mayors and Governors as weak and incapable of responding to unrest and crime in their cities. The President has used Portland to grandstand his projection of a lawless, Left-leaning America as part of a campaign that relies on fear and division to rally political support.

The Fake News Media is trying to portray the Portland and Seattle “protesters” as wonderful, sweet and innocent people just out for a little stroll. Actually, they are sick and deranged Anarchists & Agitators who our great men & women of Law Enforcement easily control, but who...

The less secure the President becomes in his winner’s image, the more threatening his responses to defend it.

Former security, law enforcement and defence officials on both sides of the political aisle have expressed concern that the President appears to break with precedent in an effort to forge a national security force in a nation that has long resisted giving the President such personal, coercive power.

Founding Secretary of the Department of Homeland Security (DHS) and former Republican Governor of Pennsylvania Tom Ridge told KDKA’s John Delano that he would likely resign rather than use DHS forces this way. The mission of DHS “is not to be the president’s personal militia,” Ridge said. In his view, the President “could probably accomplish more” by working with local and state authorities rather than “against them”.

Others were more caustic.

“I mean really the President’s trying to use DHS as his goon squad. That’s really what’s going on here.”

In a New York Times op-ed, former Secretary of the Department of Homeland Security under George W Bush, Michael Chertoff, lambasted the

'...Trump Administration’s deliberate decision to intervene in the Portland protests with a heavy-hand, unconventional means and inflammatory political rhetoric.'

Chertoff argued that this had endangered democracy and contributed to public distrust in the Federal agencies involved, adding

'...If the politically performative aspect of this policy were not already obvious, it is rendered unmistakable when footage of the mayhem is broadcast by Trump campaign commercials.'

Trump’s dangerous plays are far from over. It appears that all the way to the November elections he will wage rhetorical warfare on Democrat-controlled cities and states and if he can get away with it, send in his Federal troops.

Trump's playbook – attack, inflame, deflect and walk away – has been recycled so many times that it may be wearing thin...

Although Oregon’s Governor Brown negotiated an agreement with the White House to withdraw the Federal agents from Portland, Trump continues to threaten the Governor and local authorities on Twitter. DHS has insisted on maintaining 130 Federal agents near the courthouse as a “quick reaction force”.

Will Trump’s playbook save his Presidency?

The President’s political playbook is limited. His tactic – attack, inflame, deflect and walk away – has been recycled so many times that it may be wearing thin on a majority of Americans.

The latest polls suggest he is still far behind his Democrat rival and former Vice President, Joe Biden. More Americans now trust Biden to work with the states to implement a national plan to try to slow the deadly pandemic that has made the U.S. the global epicentre of COVID-19.

Over 150,000 people have already lost their lives to the coronavirus and the U.S. death toll is projected to climb steadily in the months ahead. Trump has struggled to show much empathy for these terrible human losses or relate to the hardships and inequalities being endured by millions of Americans.

The country’s economic downturn, however, has shaken his brash confidence. The U.S. economy is buckling after suffering its worst quarter since 1875. Some 43 million Americans are at imminent risk of losing their home and an estimated 30 million are unemployed.

Confronted with cross-cutting national failures, the President has maintained the extraordinary boast that he is “beating” the coronavirus, dominating the “anarchists and agitators” in the streets of Democratic-run cities, protecting the “Suburban Lifestyle Dream from low-income housing” and defending democracy against a “rigged election.”

Trump has railed against presidential psychoanalysis by his niece, Mary Trump, and yet soon after complained about the opinion polls, which do not reflect the same support for him as his COVID-19 chief medical adviser, Dr Anthony Fauci.

Clearly Trump’s most dangerous opponent is himself. With less than 100 days to the Presidential Election, American voters have good reason to be nervous. 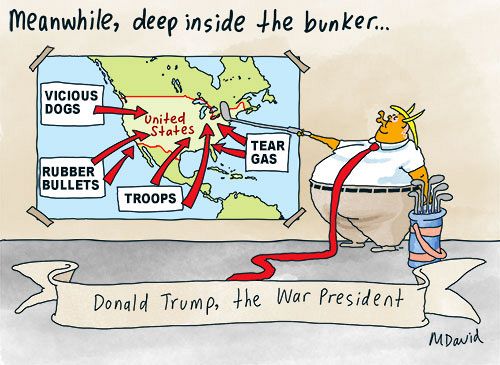 There is no longer any major economic outcome on which the United States is succeeding.

Claire McMullen is a lawyer and writer who recently completed a Masters in International Legal Studies at Georgetown University Law School in Washington DC.