A Royal Commission instigated by a Labor prime minister, a by-election won by a conservative man called John and strategic MYEFO leaks: Ingrid Matthews sums up the Turnbull Government's year that was. 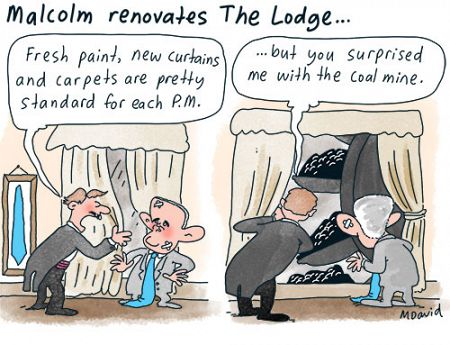 SO MUCH to take credit for, so little effort!

A Royal Commission instigated by a Labor prime minister, a by-election won by a conservative man called John and a MYEFO presaged by strategic leaks to produce misleading headlines!

All bundled into the convenient narrative of Prime Minister Turnbull getting his 30th chance or his 50th reboot, or his mojo back, or whatever. It must be quite something to repeatedly, endlessly, receive the benefit of the doubt on a national scale — especially when any lingering doubt has long since departed the minds of thinking observers.

This month, between the house and the hustings, many long-term issues – the Uluru Statement, offshore refugee camps, the NDIS – were put to the Prime Minister in a solo appearance on the ABC Q&A program. It was a golden opportunity to show the intellect and statesmanship that allegedly forms part of his political repertoire.

How have you disappointed me, Malcolm Turnbull? https://t.co/1vcWz9od3j @IndependentAus Let is count the ways

Turnbull oozes a smugness that many mistake for charm. Then someone holds him to account for some dodgy nonsense he has said, or his Government has done. The smug-charm turns to outright condescension — he belittles and bullies manipulates facts and misleads his audience.

When host Virginia Trioli asked about a recording, which, the evidence suggests, must have been, leaked by security services, Turnbull implied she was impugning the spooks. He told Iranian Australian and ship-wreck survivor Yaser Naseri that he cares about asylum seeker deaths at sea (he doesn’t); and Tommasina Owens that he has a fine grasp on the difficulties faced by her ageing father caring for her brother with severe disabilities (he doesn’t). He did not answer Michael Doyle on his future vision for recognising Aboriginal and Torres Strait Islander people (he couldn’t).

This bonfire of vanities culminated when Teela Reid – who participated in the Regional Dialogues – asked about the Uluru Statement. After reeling off the usual spurious points – mischaracterising the Indigenous Voice to Parliament" as a House of Parliament (it isn’t) and asserting that Indigenous MPs represent Indigenous constituencies (they don’t) – the Prime Minister used a technique called gaslighting.

Gaslighting is when the speaker not only distorts the question but also seeks to make the other person doubt their own position, loyalties, or self-worth. Turnbull accused Ms Reid of disrespecting Indigenous MPs (she didn’t) while asserting that he himself has the greatest respect for Aboriginal and Torres Strait Islander history, culture and people. He put this argument while disrespecting an Aboriginal woman on national television.

For the record, Ms Reid remains confident of her position and respect for her people.

Why won’t you respect Indigenous Australians’ desire for a First Nations Voice and take it to a referendum? @TurnbullMalcolm responds #QandA pic.twitter.com/ugaj5YfqoS

December kicked off with the passing of an amendment to the Marriage Act. Pushing on through measurable harm resulting in increased demand for mental health services, raising and dispersing funds not only for activism but for support, the Rainbow community finally saw marriage equality legalised.

When the Prime Minister – who did not campaign – rose to move that the Marriage Amendment (Definition and Religious Freedoms) Bill 2017 be read for the third time (an essential step to making a bill into law) he accidentally gave a victory speech instead. The Speaker reminded him to do his job and the error was edited from history. As is expected of progressive punters – conservatives actually know they are the nastier bunch – the "Yes" folks generously shared their joy with all.

The Royal Commission into Institutional Responses to Child Sexual Abuse is a grave moment. Its scale is gargantuan: five gruelling years, after more than 1.2 million documents; testimony from over 8,000 people; a 21-volume final report and more than 400 recommendations. By all accounts, the commitment, professionalism and thoroughness of the Commission were impeccable.

Did Turnbull and the Minister for Social Services Christian Porter rise to the occasion?

On the last day of hearings, Porter was tweeting a selfie at the cricket with former Prime Minister John Howard. He followed this up with an awkward speech, thanking the Commission and survivors, and boasting about increased sentences for child sex offenders — a common political response with no known efficacy.

Presumably, Porter had been tapped for promotion and was merely going through the motions.

“An outstanding exercise in love”, declared Malcolm Turnbull, creepily, of a child abuse investigation. He also reiterated his policy of limiting and capping the compensation costs, which are to be borne by the Australian public. The policy rules out redress for victims with a conviction for a serious crime. Given that police routinely escalate charges against Aboriginal suspects, this will disproportionately disenfranchise Aboriginal survivors. The policy is racist, arbitrary, populist and unjust.

Predictably, Catholic Church leaders conducted tacky, tone-deaf press conferences, speaking to the obscure theology of the confessional seal and defending their vows of celibacy. On Insiders, veteran church-watcher David Marr called their defence of the confessional "barbaric". Social media exploded. But the depravity of grown men who purport to be virgins discussing celibacy and theology, when the true issue is sexual abuse of children, went without comment from our political leaders.

If you thought the display from Turnbull and Deputy Prime Minister Joyce in New England (my write-up here) skin-crawling, wait until you hear about the oratorical wit of John Alexander.

"John Alexander is an honest man", Turnbull shouted at the happy throng, despite the fact that he had lied on a statutory declaration about checking his eligibility to run for Parliament. "A hard-working man", crowed the PM, among other hackneyed descriptors invoking a tennis career rather than a political career — because, what political career?

In real life, this retiree-in-waiting bunks down in Bondi while renting out his Moss Vale mansion for $1,400 a night — without declaring it. He says sexist, racist and ableist things on camera. He makes non-apologies and channels Donald Trump, saying: "no-one has done more for people with disabilities than I have".

This is not true. Thousands of people, including children, care for people with disabilities from dawn to dusk and every hour in-between, every single day for a carer’s allowance that amounts to seven cents an hour above the paltry Newstart rate … so, no, John. Stop lying.

Hahaha ... did you hear the one about the disabled?

The Mid-Year Economic Fiscal Outlook (MYEFO) was delivered by a man whose degree is in "applied economic geography" and who has apparently now been informed that cutting wages dampens demand, consumption and growth.

The trick to MYEFO is for treasurers to cut spending, preferably targeting people they hate — like students and migrants and children. This disinvestment in education and social cohesion is called "savings". The budget deficit increase projection is revised downward and presto! An economically illiterate press babble ignorantly about "slashing debt". By the time financial journalists produce a more sober analysis, of falling real wages and rising public and private debt, the Turnbull Government got the headlines it wanted.

The caravan moves on

And there it is. A quick trip across the Australian political landscape reveals long-term issues like First People's justice and rights, our torture of refugees and what was once enthusiastically sold as a "debt and deficit disaster", have gotten nowhere. It shows a Prime Minister with no vision for the future and apparently no capacity to form one.

So season’s greetings! Thank you for your time and for your shares and comments. I look forward to writing more next year.

VIDEO: #QandAscending #Malsplain: How Malcolm Turnbull was a condescending douche bag to almost everyone in the country on ABC Q&A. https://t.co/BFue0HnPkf

Ingrid Matthews is a sessional academic who teaches law and human rights. You can follow Ingrid on Twitter at @iMusing or via her blog, oecomuse.

The absolute arrogance and contempt that Malcolm Turnbull shows for the electorate is staggering. He maliciously held @TonyAbbottMHR to a benchmark that he himself now refuses to abide by. #Newspoll #BringBackAbbott #auspol pic.twitter.com/mCFXj6KbOV