Dirty tricks and a whiff of corruption again in Queensland, as planning changes on land next to a national park have turned Campbell Newman's former Brisbane seat once more into a battleground, reports Steve Bishop.

QUEENSLAND'S LIBERAL NATIONAL PARTY (LNP) believes a numbers battle over a massive housing development by Cedar Woods Properties Ltd could swing the result of the next State election its way.

Fears about the size of the development, on land with an area equal to the combined Brisbane suburbs of New Farm and Teneriffe, helped current Labor MP and Minister Kate Jones unseat former LNP Premier Campbell Newman in 2015, and enable Labor to form a minority government.

With an election due in the next 12 months, the LNP has spent two weeks hammering away at this issue, culminating in an hour’s debate in Parliament on 23 May, with a motion condemning the Palaszczuk Government

“…for its rank hypocrisy and planning uncertainty regarding the Cedar Woods development.”

It had seized the initiative on 9 May with an attack in the Brisbane City Council chamber by the LNP chair of the planning committee, Clr Julian Simmonds, based on the LNP’s interpretation of a letter from State Government Planning Minister Jackie Trad, dated 20 April.

In the letter, Ms Trad directed council to change two zonings for the Cedar Woods development contained in the council’s draft neighbourhood plan for Ferny Grove and Upper Kedron.

The LNP’s next move was a letterbox blitz to every home in The Gap by local councillor Steve Toomey, linking Kate Jones to its allegation that the Government had instructed the Brisbane City Council to increase the number of homes on the development by more than 50 per cent. 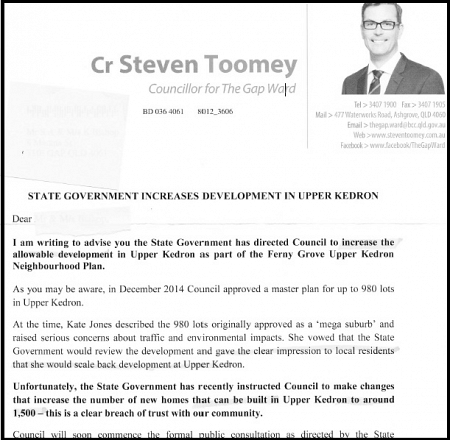 This was followed by a petition attacking the Government for changes that would allow '1500 new homes to be built on the Cedar Woods site' and by a major speech by Clr Simmonds in the council chamber on 16 May..

But housing numbers for this land have been an issue for many years.

According to developer Cedar Woods, less than four years ago the Council’s local plan would have had the effect of restricting any development to about 440 homes on the 227 hectares.

In its submission to the Government, it said:

'Under the current zoning only the Emerging Community zone supports residential development at viable densities.'

And it estimated that this zone 'would facilitate approximately 440 dwellings'.

Then, on 5 September 2013, LNP Lord Mayor Graham Quirk intervened and the eventual outcome was a secret agreement, signed by the Council, which contradicted the local plan with a scheme for up to 1,350 homes.

Why is it important to understand how this came about and what has happened since?

With the Queensland Labor Government already three seats short of a majority in its own right in an 89-seat parliament, it will need to win at least 47 seats in a new 93-seat parliament to form a majority government in the next election.

In 2014, nearly 1,300 people, the vast majority from Premier Newman’s seat of Ashgrove (now renamed Cooper), objected to a development plan for 1,350 homes on the development site, with most of the people concerned about the environment and about increased traffic.

Despite a 10 per cent swing against Newman, Jones won the 2015 election by only 2,511 of the 30,084 formal votes cast and a ReachTEL poll on 26 May found a 50-50 split between Labor and the LNP on a two-party preferred basis, with eight per cent of voters undecided.

The massive parcel of land stretches for two kilometres on its southern side alongside D’Aguilar National Park and the narrow, twisting Mt Nebo Road which decants into Waterworks Road, the only road out of The Gap towards the city.

To its north are the extremities of the suburb of Upper Kedron, Brisbane’s westernmost suburb north of Brisbane Forest Park.

In 2013, the local plan showed most of the land was zoned for rural and  environmental purposes, with only 60 hectares in a corner near Upper Kedron labelled for emerging communities.

The land was owned by Institutional Investments Pty Ltd, a privately-held company, of which Ian Douglas Ferguson Macallister is the only director.

'… specifically Stockland, Mirvac and Lend Lease, showed sustained interest in purchasing this site and in each case they were unable to agree to terms because of the risk relating to the incorrect mapping in the City Plan.'

An email released under a right-to-information request by the Save The Gap lobby group shows that, on 5 September 2013, the manager of the development assessment branch of city planning and sustainability for the Council wrote an email addressed informally to: 'Dear Ian'.

It said that 'issues relating to the development of your land' had 'escalated' to the Lord Mayor who had 'requested' that senior council officers should meet him 'to seek resolution of the issues'.

At this stage, no planning application had been made. The issues appeared to be the way in which patches of land zoned for environmental purposes were spread through the site.

On 29 October 2013, Richard Sivell, manager of major development projects for the Council wrote in an email:

'We put the idea of an infrastructure agreement to the owner and he was receptive to the idea.' 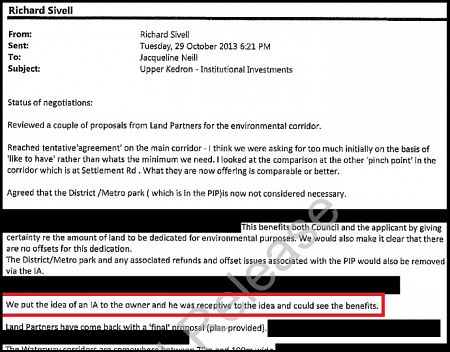 This was a major departure from normal planning processes, in which such agreements are put in place after planning permission has been granted.

It was so unusual that Bevan Lynch, chairman of the Urban Futures board, the Council's planning advisory group, wrote in an email on 5 November 2013

'… we are creating a unique agreement.'

It was so unusual that, in an independent review for the State Government of the planning process, planning expert Greg Ovenden said he had

'…significant concerns about the weight given to the infrastructure agreement, its lawfulness and its role in overriding the local planning instruments.'

Mr Lynch wrote in the email:

There was no mention in the email of the outcome working for the benefit of Brisbane.

By 8 November 2013, the secret draft agreement had moved way beyond its stated objective of delivering 'open space and environmental corridors across the site' to a development 'master plan' with a 'draft subdivision layout'.

Cedar Woods later noted that the agreement 'foreshadows a density of 1,350 lots'.

But the independent view of Greg Ovenden was:

'The reasonable development expectation in both the Rural Area and the environmental Protection Area is for a minimum lot size of 10 hectares and very low intensity land uses.'

On the 167 hectares outside the 60 hectares for emerging communities, this would have produced less than 20 homes.

'... infrastructure agreement is predominantly about the infrastructure provision. It is not necessarily an instrument that you would say protects the environment.'

Drawn up with much secrecy, the agreement only became public when it was submitted to the Federal Department of the Environment, which then placed it on its website (no longer available).

“The question here is: why did council enter into a private or secret infrastructure agreement with the former owner of the land and not tell the locals when they consulted on the city plan or the local plan? This question has been unanswered by Brisbane City Council…”

In the City Council chamber, then Labor leader Milton Dick revealed, on 21 October 2014 (meeting 4449), that

“Electoral Commission Queensland records show that Institutional Investments and their owners donated $12,200 to the LNP.”

Mr Macallister told the Electoral Commission of Queensland in May 2013 he had donated $4,200 to LNP Team Quirk and Forward Brisbane Leadership in the 2012/13 financial year.

“I do not get involved in donations of any sort.”

On 27 February 2014, the Council and Ian Macallister’s Institutional Investments Pty Ltd signed the infrastructure agreement, which now had a notional capacity for 1,350 homes instead of a viable capacity of 440.

In May 2014, the outcome of the Council planners’ deliberations did indeed “work for Ian”. Cedar Woods Pty Ltd announced it would pay $68 million plus GST for his land which, until the infrastructure agreement, had proved worthless to major developers.

When a Cedar Woods subsidiary, Huntsman Property Group Pty Ltd, applied for planning permission for 1,350 homes on the site there were nearly 1,300 objections. Eventually, the Council gave permission for 980.

As a candidate for the seat of Ashgrove in 2014, Kate Jones vowed to have the permission examined by the Government if Labor won power. It did — and Planning Minister Jackie Trad “called in” the decision in April 2015.

In July, Ms Trad gave the go-ahead only for 480 homes on 67 hectares in a corner of the site which had contained the original area designated for emerging communities. 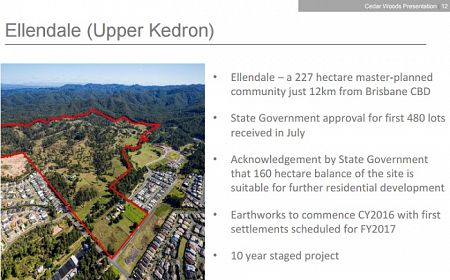 Screenshot from 2015 Cedar Woods Properties AGM brochure, which showed the site in question, which shows the site backs immediately onto national park on two sides (Document via Brisbane City Council)

She then ordered the council to provide a new neighbourhood planning document.

The Council did so, including in it the recommendations of a group of 20 independent, local residents. The draft plan was submitted to the Minister in January this year.

On 20 April this year, Ms Trad, faced with the competing needs of a shortage of housing land and conservationists’ pressure to retain green space and protect koalas from the intrusion of people and pets, wrote the letter which has resulted in the LNP allegations.

'…city-wide scheme provisions that would apply to areas of similar topographic and locational characteristics.'

Specifically, the instruction involved increasing the density of homes that can be built on land closest to the forest park, where housing had been limited to three homes or less per hectare.

The Council estimated this meant taking 33 of the 81 hectares zoned for minimal density and placing it in zoning for up to 12 homes per hectare.

Simple maths suggests this would have increased the development by about 300 homes.

Steven Toomey, the LNP councillor for The Gap, sent a letter to every home in The Gap saying the Government had

'…instructed Council to make changes that increase the number of new homes that can be built in Upper Kedron to around 1,500 – this is a clear breach of trust with our community.'

The letter said Kate Jones had given 'the clear impression to local residents that she would scale back' development.

'Council’s statements that the State Government directed council to allow 1500 lots are totally false, and this decision will ensure Council can put their plan to the community for meaningful consultation without the misleading claims.'

Lobby group Save The Gap announced on May 18 Ms Jones had organised a meeting for them with her and planning minister Jackie Trad.

And also on 18 May, Ms Trad announced in a letter to the Council she had 'decided to remake' her direction to the Council so that her new directions 'should result in no increase to the density or yield' of homes in the neighbourhood plan which could now be subjected to public consultation.

It is now a matter for the Council to decide future planning applications for the rest of the Cedar Woods site.

I asked Ms Trad and Lord Mayor Quirk more than 20 questions each about the Cedar Woods development. Despite repeated phone calls and emails to their offices neither responded.

Disclosure: The author lives in The Gap.