Following his reports on economic stimulus in Independent Australia and elsewhere, Alan Austin offered to appear before the Royal Commission into the just commenced Home Insulation Program (HIP). Commissioner Ian Hanger AM QC responded requesting he present a sworn statement of evidence to the Commission.

(This piece is part one of Alan Austin's sworn submission to the RC into the HIP and has been only edited (slightly) for format.)

None so far appears to have analysed the program’s overall costs and benefits. None has determined the extent to which it served to avert recession. None has measured the lives saved and other personal, social and economic benefits delivered by its rapid implementation. And none has explored the extent to which enemies of the then federal government distorted and falsified claims about the program.

Part 1: Success of the 2009-10 stimulus in averting recession

In 2007 Australia was one of the world’s better-managed economies. Depending on the formula used to measure and compare economic health, Australia ranked between 8th and 12th globally. Chart A, below, published in Independent Australia, shows 2007 rankings using scores derived from a transparent formula using eight variables – income, growth rate, median wealth, jobs, inflation, taxation, government debt and economic freedom. [1] 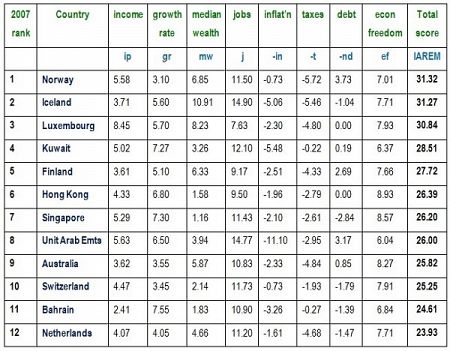 Chart A: Top 12 economies in the world in 2007 ranked in order by IAREM score.

Raw data for the IAREM – Independent Australia’s ranking on economic management – is from the World Bank, the International Monetary Fund, Credit Suisse and other sources.

Australia in 2007 was 9th on the IAREM ranking, only bettered by Norway, Iceland, Luxembourg, Kuwait, Finland, Hong Kong, Singapore and the United Arab Emirates.

All developed economies were then impacted severely by the global financial crisis (GFC). Markets collapsed and workers lost jobs in their millions. All governments scrambled to respond. Only one developed nation emerged almost unscathed from that turmoil.

By 2011-12 Australia found itself clear world leader on economic wellbeing.

According to Economic Roundup: Issue 2, 2011, by the Australian Treasury:

'Australia was one of the few advanced economies that avoided recording at least two negative quarters of economic growth over this period. During the most acute period of the global recession Australia's economy slowed but it did not experience the large sustained contractions experienced in many other countries over the same period.' [2]

Only two member nations of the Organisation for Economic Cooperation and Development (OECD) avoided two negative quarters of gross domestic product (GDP) growth through 2008 and 2009. Thus only two averted recession (defined in Europe and Australia as two consecutive quarters of declining GDP). These were Australia and Poland. Poland’s stimulus spending response was second highest in the OECD, second only to Australia’s.

'The rapid deployment of fiscal stimulus appears to have been effective in increasing domestic demand, with transfers in late 2008 and the first half of 2009 boosting household consumption and putting a floor under business and consumer confidence … Fiscal stimulus estimates imply that growth would have been negative for three consecutive quarters absent fiscal stimulus.' [2]

This opinion was shared worldwide, including by Nobel Prize-winning economist Joseph Stiglitz of Columbia University:

“Kevin Rudd … realized that it was important to act early, with money that would be spent quickly, but that there was a risk that the crisis would not be over soon. So the first part of the stimulus was cash grants, followed by investments, which would take longer to put into place. Rudd’s stimulus worked: Australia had the shortest and shallowest of recessions of the advanced industrial countries.” [3]

Note: the definition of recession used by some in the USA is one negative GDP quarter.

The same fate was forecast for Australia, based on trends in late 2008. Allan Hawke wrote in his Review of the Administration of the Home Insulation Program:

“There was little economic optimism at the time. Before the stimulus, unemployment was forecast to reach around 10 per cent by mid-2010 with the highest impact expected on lower-skilled workers. Negative economic growth was forecast for 2009, with the construction industry being particularly affected.” [5]

By 2010, Australia was almost universally seen as having the world’s best-performed economy. The evidence strongly suggests Australia’s continuing buoyant economic activity was the result of the unique stimulus implemented by the then federal Government.

At the end of 2013, according to analysis published in Independent Australia, Australia’s economy continued to lead the world on IAREM scores derived from the eight variables: 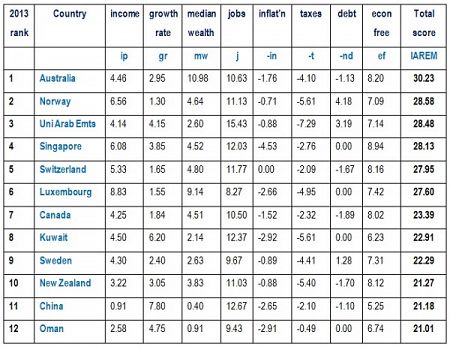 The quantum, speed and direction of the stimulus spending, notably the rapid cash handouts to households, the HIP and Building the Education Revolution, clearly had the desired effect.

Authorities to have reached this conclusion, besides Australia’s Treasury and Columbia University’s Joseph Stiglitz, above, include:

'While European countries implemented austerity measures worsening social conditions of their population and pushing the economy into a fallacious fiscal adjustment, the prompt reaction of the Australian government limited the possible negative effects caused by the macroeconomic shock and favoured the process of economic recovery.' [7]

'As a tool of economic policy, the stimulus worked. Although other factors, including the strong demand from China and the sound position of Australia’s banks, were also important, the stimulus played a central role in making sure that Australia suffered less of a downturn than most other developed countries.' [8]

“The package targets consumer spending, which is absolutely critical to our near-term economic prospects, and boosts capital expenditure — looming as one of the real casualties.”

'… the fiscal stimulus has clearly helped. Australia went hard and went early and put resources in the right places. As a result, Australia was the only advanced country to have reported positive through-the-year growth to June 2009. It's no wonder the international commentators have been talking about Australia's ‘miracle economy' going from "down under to down wonder".' [10]

'Although some of the details of these fiscal stimulus packages have since been the subject of domestic political criticism, international organizations such as the International Monetary Fund and the Organisation for Economic Co-Operation and Development have praised Canberra’s response.' [11] 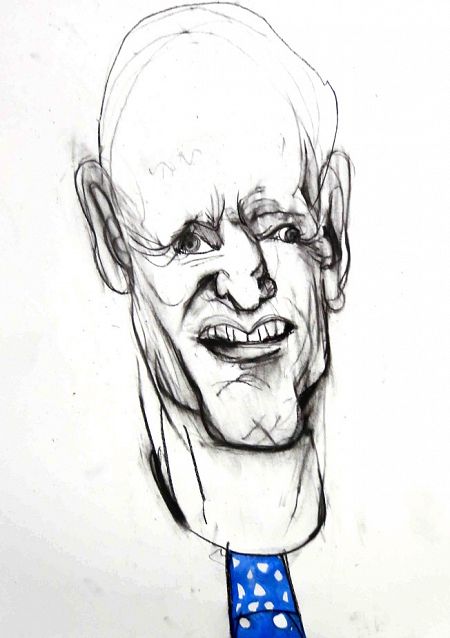