Perennially unlikeable: Peter Dutton is fooling no one

AS LEADERS GO, Opposition Leader Peter Dutton is proving to be unexpectedly very laissez-faire in his style of leadership, rather surprising and out-of-character given the iron fist with which he ruled when he was a hardline Minister in the previous Government.

This must be the new "softer" Dutton. We should all take this moment to pause and spare a thought for Dutton’s public relations and communications staff who are trying desperately to turn a potato into a diamond, to no avail. Too much water under that bridge.

While, for many, the focus has been on how new Prime Minister Anthony Albanese is faring in the job, from all reports he’s doing quite well, the same cannot be said for the Leader of the Opposition. He has failed to land a blow on the Government inside or outside of the House of Representatives.

In a job that would be akin to herding cats, Dutton, surprisingly seems unperturbed by rogue MPs and Senators running off at the mouth or, as in Senator Sarah Henderson’s case, running a Twitter account that could easily be mistaken for a parody account.

For too long, the @AlboMP Government has been asleep at the wheel on strengthening online privacy. @MRowlandMP has been completely missing in action.

Dutton seems keen to just let his shadow ministers, MPs and senators go with very little intervention from him as leader, irrespective of the inevitable embarrassing gaffes or political fallout. He seems happy to let them go out into a world of media interviews and political settings without policies or any semblance of a plan, let alone win back government.

Just arguing for argument’s sake. That seems to be Dutton’s game plan for the Opposition.

It's a rather bold leadership strategy from the leader of the federal Liberal Party less than six weeks out from the Victorian State Election, though not entirely unexpected. It’s doubtful we’ll see Dutton out on the hustings much, he’s not well-liked in Victoria and would be considered more of a hindrance than a help to the embattled Victorian Liberals looking down the barrel of electoral annihilation.

An unenviable position for any leader to be in, especially a new one with high hopes after achieving his long-held dream of seizing the leadership.

While Dutton flails, the women of the Liberal Party have stepped up to the plate, to be the proud brand ambassadors of the Liberal Party. Like when Senator Jane Hume on Insiders last month uttered the faux pax “we don’t have policies”. After that cracker Hume should go into hiding now, at least until Cup day when some Liberal Party benefactor invites her to The Birdcage.

The missing men of the Liberal party will also probably materialise that day too, probably in exactly the same place as Hume. It’s truly amazing how a bit of free booze and a corporate box can entice even the most publicity-shy MPs out of their electorate offices. Racegoers will be very civilised and pretend to like them despite harbouring intentions of thoroughly routing the Liberals at the State ballot box a few weeks later.

Another rogue female Liberal, Senator Hollie Hughes, has been complaining that her taxpayer-funded cocktail parties are no more now Prime Minister Albanese has banned alcohol in Parliament. Dutton doesn’t appear to be in any way embarrassed about Hollie. On the contrary, he seems so buoyed by the controversies she creates on matters that he remains largely silent on. 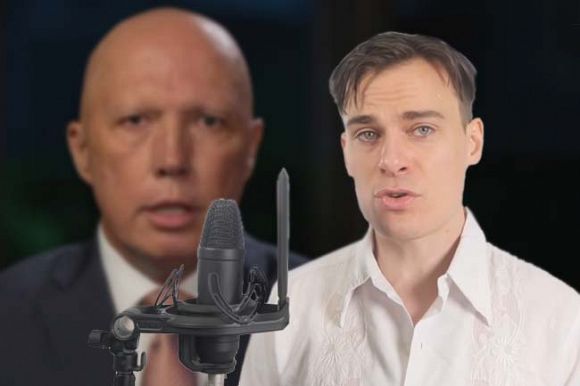 Dutton appears to have become a monarchist when the Queen died, prior to this he had never betrayed his secret love of the monarchy to anyone. Even though his solidarity with the movement is just weeks old, he is as fervent as Menzies in his newfound admiration for the King and for Australia to be ruled over by a foreign monarch. It is likely only a matter of time before Dutton works in the words "I did but see him passing by and yet I love him till I die" into a speech he gives about the new King.

Furthermore, Dutton’s not embarrassed that his Deputy Leader Sussan Ley claimed that comments made by former Prime Minister Paul Keating“would be seized on by the Chinese Communist Party” and used to hurt us, “significantly undermining national security”. Intellectual giant Keating is yet to make any comment on Ley’s reaction to his words but if he does, it would be advantageous if confined his word limit to 206 words because that is a special number to the numerology devotee Ley.

Not to be outdone, Shadow Minister for Home Affairs Karen Andrews earned her street cred by weighing in on Novak Djokovic this week, saying it would be a “slap in the face” if his three-year ban to enter Australia was lifted, a ban imposed by Alex Hawke on her watch. Even though the requirement to be vaccinated to enter Australia has been lifted, Andrews believes the punitive punishment she meted out to Djokovic should remain in place regardless.

And to end the week on a high note, Dutton now has to contend with offensive comments made by Barnaby Joyce a fortnight ago on Sky comparing an Indigenous Voice To Parliament to Nazi Germany. Joyce has doubled down. Dutton’s voice has been silent on the matter since the comments were made, which speaks volumes about his own beliefs and his total inability to lead.

I’m not sure what’s worse, @Barnaby_Joyce making disgraceful comparisons between the Voice and Nazi Germany, or @PeterDutton_MP refusing to do anything about it.#auspolhttps://t.co/p7h5N4fN9T

Dutton has proven he had a plan to seize the Liberal leadership, but nothing beyond that, what he didn’t have was a plan to lead. He comes to the job with no policies, no vision, no admirable back story. He’s not good at media politicking, despite doing a lot of it over the years. All those hours of media have not translated into the public liking him.

Australians have good memories and their opinion on Dutton is not softening despite his best efforts to extinguish his hardline image, which he cultivated so carefully over many, many years.

Dutton leads nothing but a broken party with a few rogue stalwart trainwrecks. He’s a visionless leader, with no idea what to do or how to lead.

He’ll be easily toppled by the first Liberal upstart to write a decent policy or have a crack.