The double-edged sword of penalty rate cuts for the lowest paid alongside tax handouts for the privileged, may well galvanise the union movement, writes John Passant.

THE FAIR WORK COMMISSION (FWC) decision to cut Sunday penalty rates for workers in the retail, fast food, hospitality and pharmacy sectors is – or should be – a wake-up call to the union movement.

This graph from the ABC shows who will be impacted and the extent of the cuts to penalty rates: 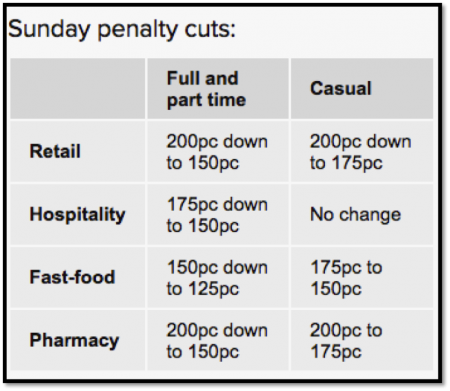 According to the Australian Council of Trade Unions (ACTU), the decision will cut the take-home pay of nearly half a million workers, some by as much as $6,000 a year.

Anyone else noticing a pattern here?

Let’s put this in perspective. While the Government and its agencies are cutting living standards, the PM and Treasurer are proposing a tax cut to business worth $50 billion over the next decade. This will somehow create a capitalist utopia. It won’t, of course.

It is all about priorities, isn’t it? Poor people and workers are not the priority of the Turnbull Government. Rich people and big business are.

This attack on the poor and workers is not some tsunami that has suddenly hit us. The tide of this one-sided class war of the bosses on the rest of us has been rising steadily since the election of the Hawke Labor Government in 1983. The Prices and Incomes Accord was a document of class collaboration, which has destroyed the combativeness of the Australian working class.

The results of the 34 years of class collaboration this arrangement spawned are obvious. Union membership is at record lows. Industrial disputes are at near record lows. The consequences of not fighting industrially are a growing division in society between the haves and have-nots — with more people becoming have-nots.

As I wrote late in IA last year:

'With real unemployment at over nine per cent with inequality continuing to increase, with wages rising at a record low rate of 1.9 per cent, and with more than 2.9 million Australians (including more than 731,00 children) living in poverty, the real question is: who will be the losers and who will be the winners [of "reform"]? No prizes for guessing that the billionaires will be okay but that poor people and workers won’t.'

The conclusion is obvious. If you don’t fight you lose. 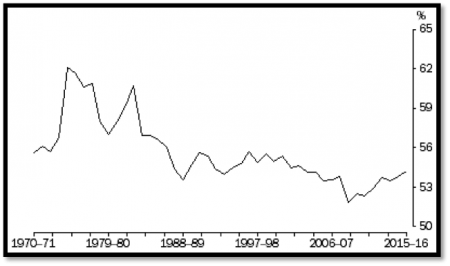 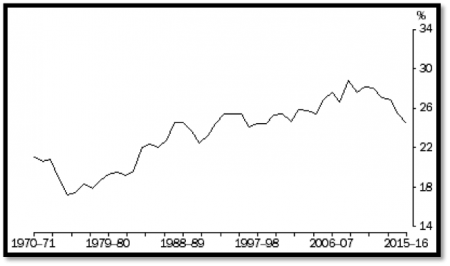 One cause of the shift? The collapse of strikes and other industrial action over much the same period. Here are some graphs showing that decline: 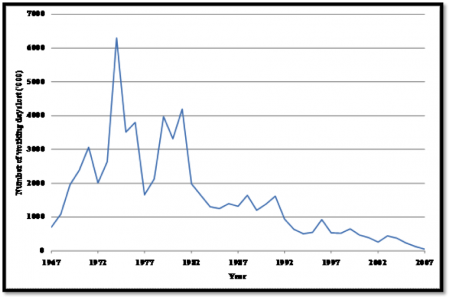 Source: B. Dabscheck, ‘The arbitration system since 1967’, in S. Bell and B. Head (eds.), State, Economy and Public Policy, Oxford University Press, Melbourne, 1994; and ABS, Industrial Disputes, Australia, electronic delivery, ABS Cat. No. 6321.0.55.001 (via Jane Romeyn, 'Striking a balance: the need for further reform of the law relating to industrial action', parlinfo.aph.gov.au).

The ABS figures from 2011 to 2016 show further decline with a very slight uptick last year and the year before: 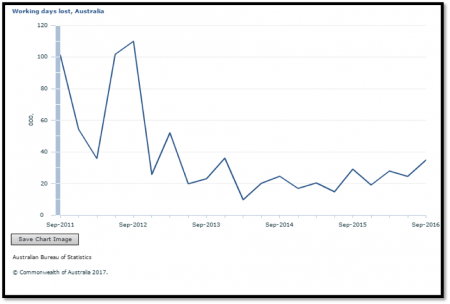 The story of getting rid of penalty rates shows the reality of this lack of class struggle and the perfidy of some union officials. The Shop, Distributive and Allied Employees Association (SDA) has been trading off penalty rates for some time.

As Alex McKinnon says in The Vocal:

In August, Fairfax published a massive investigation revealing that the SDA had cut deals with some of the country’s biggest retail and fast-food chains that left more than 250,000 workers being paid below what they’re worth.

In exchange for companies signing up workers to the union on their behalf, the SDA allowed giant companies like Coles, Woolworths, KFC, Hungry Jack’s and McDonalds to pay their staff less than the award wage and forgo paying them penalty rates.

One of the main arguments for reducing or abolishing penalty rates is that it will increase employment. As Citi Research argues, this is not the case. Most of the money will go into the pockets of the businesses. Companies like Coles and Woolworths will use the money to "improve" labour saving techniques, like self-serve checkouts — although I note Coles is rethinking this exercise.

‘Unbelievably, one of the justifications given in the [Fair Work] Commission’s findings was that there was already “significant levels of noncompliance” from employers who were legally obliged to pay their workers properly. So they have rewarded exploiters at the expense of the exploited …’

The likes of 7-Eleven – whose business models appear to be built on underpaying or overworking staff – are the trail blazers for cutting penalty rates? WTF?

The SDA, courtesy of the cosy union membership sign up arrangements it struck with the likes of Coles and Woolworths and other big employers (and for which the union pays them millions to cover payroll costs!) is the biggest private sector union in Australia. That buys it a lot of power in the ACTU and the ALP.

The FWC decision to cut penalty rates for some workers is the logical extension of the SDA deals. The knowledge that up to 50,000 workers were already without penalty rates, or had reduced penalty rates, might well have strengthened the resolve of the FWC to take the decision it did.

When the FWC reviews penalty rates in other sectors, as it is mandated to do under the Fair Work Act, what do you think the result is likely to be?

This is a real test for the union movement. There is incredible anger out there with the decision. The ACTU could give focus to that anger by calling strikes against the decision and pushing employers to agree not to cut penalty rates. Some employers are already doing that.

The ACTU could even organise a consumer boycott of companies that have cut or abolished penalty rates. It won’t.

We could rely on Labor and their Parliamentary road to somehow overturn the decision of the "independent umpire". That will take years and the exact nature of the change the Labor Party will make is unclear. Its current proposals do not appear to reinstate the lost penalty rates, least of all with effect from 1 July 2017, when the decision will come into force. Labor certainly won’t overturn all the SDA deals that abolish penalty rates.

One important option would be for workers in the sector to join the Retail and Fast Food Workers Union (RAFFWU) — a new group of activist and democratic unionists trying to win better outcomes for workers.

The second would be for the ACTU to organise mass protests and call for "illegal" strikes in all the industries currently under attack — and not just on penalty rates. Public servants haven’t had a proper pay rise in three years. Building workers are under attack with a new industry code of conduct coming into force in September that cuts their wages and conditions.

Imagine if workers from all three groups and others under attack or threat got together and organised joint strikes to defend their interests.

An injury to one is an injury to all. If the bosses get away with this cut in penalty rates we all lose. They smell blood and if we don’t defend penalty rates they will be tempted to launch even more brazen attacks.

Workers organising their own defence is the only way to turn back the rising tide of ruling class attacks.

Another day. Another $1 000 000 stolen from the pay packets of retail and fast food workers. https://t.co/8J0w9U8Jll #penaltyrates #auspol pic.twitter.com/e2vjt8rMcQ