John Passant examines negative gearing and the sectors that continue to benefit from this and other tax concessions favoured by the Turnbull Government.

NO DOUBT you will be shocked to learn, as I was, that it is the rich who benefit overwhelmingly from negative gearing losses — and the superannuation and capital gains discount tax concessions.

Here are some pesky facts.

The main beneficiaries in terms of the size of the negative gearing benefits are the well off.

According to NATSEM the top 10% of income earners get 34.1% of the benefit. 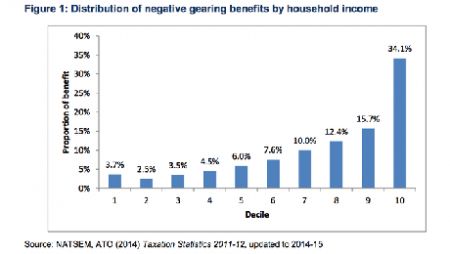 Grattan Institute analysis shows that, by adjusting to smooth out the impact of the deduction which cuts many people’s taxable incomes significantly, the top decile before taking into account the loss gets 50% of the tax benefits that flow from negative gearing.

We are not talking small bikkies either. The revenue saved from the losses claimed of between $12 billion and $15 billion is up to about $5 billion a year.

An important aspect of the thinking of negatively geared investors is the capital gains tax (CGT) concessions that flow when the property is sold.

Unlike all other forms of gain taxed as income (wages, business profits, interest, rent and so on) capital gains are taxed concessionally. If you hold an asset for greater than 12 months when you sell it you only include half the net capital gain in assessable income. In the 2015 Tax Expenditure Statement, the Treasury estimates this tax expenditure forgoes a bit over $6 billion a year. 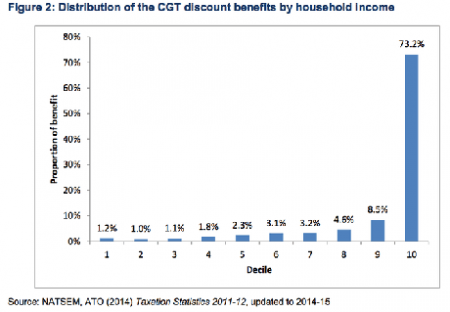 The Murray Financial Services Inquiry shows that the top decile gets 38% of the superannuation tax concessions. These superannuation concessions are worth about $30 billion a year so the top 10% get around $12 billion of the revenue forgone. This chart from page 138 of the final report of the Inquiry captures it.

In other words, the benefits of these two tax concessions – super and CGT – and the negative gearing tax losses flow overwhelmingly to the very well off. Abolishing all the concessions for all taxpayers would improve the budget bottom line by about $40 billion according to Treasury. Abolishing the benefits for the top 10% of income earners would free up a potential $16 billion or so in revenue a year.

Negative gearing, superannuation and capital gains all show that the richer you are the bigger benefit you get. This is a classic outcome of using the tax system to provide what are essentially disguised grants.

Here are some links to various papers on the issue highlighting the benefit flows very well. The ACOSS paper deals more generally with inequality of income and wealth in Australia.

John Daley and Danielle Wood, 'Submission to Standing Committee on Economics inquiry into Tax Deductibility', (Grattan Institute, February 2016). Page 11 has a graph of the before and after negative gearing benefits.

The 2014 'Murray Financial Services Inquiry', especially page 138 with its graph of the tax concession benefits flowing overwhelmingly to the top 10%.

John is a former assistant commissioner of the Australian Tax Office in charge of international tax reform.

This story was originally published on John Passant's website en Passant on 24 April 2016 and has been republished with permission. You can follow John on Twitter @JohnPassant.

Negative gearing shut you out of the housing market? Is it time we #ShutThisPartyDown? By Waleed and @twhittyer.
https://t.co/9EjXQHqu5G