Out of his depth Abbott sinks Australia further into the merde

Those dismayed at the many humiliations Tony Abbott has brought upon Australia have had another appalling week. Alan Austin reports from France.

That’s the intro to Thursday’s article in Taiwan’s Taipei Times.

‘Tony Abbott praised the scrapping of a "useless, destructive tax," while critics called it an embarrassment that would make Australia a global pariah.’

Strong words. But if Australia was not already a global pariah before this week, it is now.

Last week’s report at IA on worldwide negative news bulletins on Abbott’s performance quoted 30 articles in 16 countries. Not too bad.

To these can now be added Taiwan, Sweden, Singapore and Japan. That’s 20. Not good.

Then must be added India, Switzerland, China, Pakistan, Qatar, Norway, Macedonia, Bahrain, Hong Kong and Kuwait. That makes an even 30 countries all running highly damaging news stories about Australia. And, no doubt, there are more.

Issues include Abbott’s attacks on the poor in the May budget, the unravelling of relations with Indonesia and his multiple humiliations abroad.

Two issues this week have dismayed the watching world even further.

‘The controls were directed at the 350 biggest polluters in the country. The Conservatives triumph.’

It noted Australia is among the world’s highest greenhouse gas emitters per capita, but its prime minister

‘... has repeatedly denied that climate change is the result of human activities.’

The decision is a success for the Australian government, but also a giant step backwards ['jättekliv bakåt'] for climate change.

‘Tony Abbott is recklessly endangering the future of the planet.’

EurActiv in France headed its report:

"The EU regrets Australia withdrawing its carbon tax mechanism just as initiatives to put a price on carbon are emerging elsewhere in the world."

In the UK The Telegraph reported that Abbott’s decision was

‘... despite warnings by scientists that he was ignoring the evidence on climate change’ and was therefore pursuing a ‘perfect storm of stupidity.'

Germany’s Die Freie Welt claimed that after Abbott last year closed the Climate Commission, this move will further the

‘... deterioration of relations between Australia and countries committed to influencing climate change.'

From the United States, the influential UPI agency led with:

‘Thursday's vote by the Australian Senate to repeal a carbon tax is a "historic act of irresponsibility," the director of a top climate advocacy group said.’

The Straits Times in Singapore announced:

“... no one with a conscience could agree with them."

‘Japanese fascist invaders brought profound suffering to people in a number of countries, including Australia, during World War II. Their aggression was extremely brutal.’

'Bishop's verbal provocation made her look more like one of the often pointless 'angry youths' found in the Chinese cyber sphere than a diplomat ... The Chinese-language editorial was in places more strongly worded, referring to Bishop as an “idiot”. She was already on the receiving end of a tongue-lashing from Chinese Foreign Minister Wang Yi when she visited Beijing in December ... after Canberra criticised China's declaration of an air defence zone in the East China Sea.'

A thoughtful piece in Indonesia’s Jakarta Globe was headed:

‘As Beijing can shift its orders elsewhere, going hard on China isn’t easy for Australia’.

‘... is grasping for a harder line on China and not doing it very well ... Last week, though, he went off the diplomatic rails ...’

Even Japanese publications criticised Abbott's, with The Diplomat heading its item:

‘By making such a comment, Abbott showed how insensible he is towards people in China and other countries who had suffered greatly as a result of the ‘advanced’ war skills of Japanese troops and their sense of honor during their aggression. It also makes people wonder how far Australia under his leadership would go to support Japan.’

In Macedonia, the heading in Bukvar.mk’s brief report was simply:

‘They [Japanese troops] were bloody cannibals’.

‘World War 2 veterans and the RSL are angry and disappointed over Prime Minister Tony Abbott’s praise for Japan’s war record.’

In the UK, The Independent put it bluntly up front:

‘Tony Abbott embarrasses Australia by praising Japanese WWII military, "getting on the sake" and posing for "crotch-shot" photo opportunity.'

The Times led with:

‘Was the PM dusty? Tony Abbott cops a ribbing over whether he had too much Sake with Japanese PM Shinzo Abe’.

The Standard in Hong Kong amplified the criticism in China’s press with an item titled:

The blunders are the work of an inept government led by a stumblebum PM, so clearly out of his depth in foreign affairs, he is an international joke.

But it is the nation the world is really laughing at. 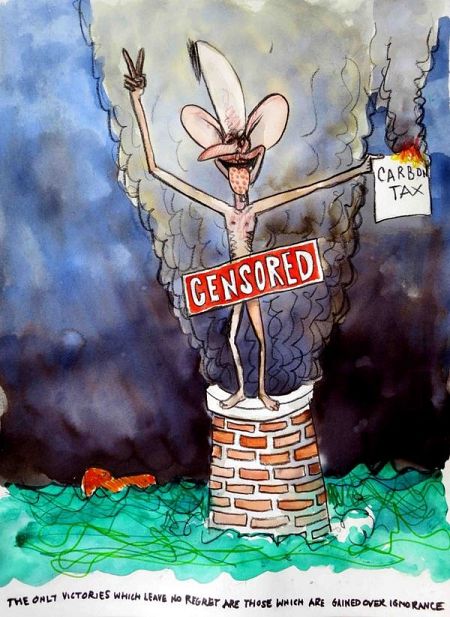