An electronic database called MERS has created defects in the chain of title to over half the homes in America. Ellen Brown from Truthout reports. 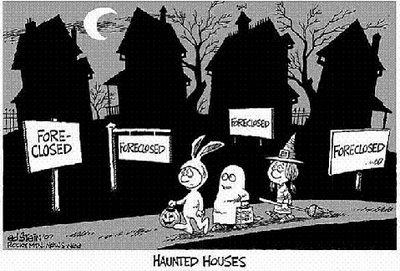 John O'Brien is register of deeds for Southern Essex County, Massachusetts. He is mad as hell and he isn't going to take it anymore. He calls his land registry a "crime scene". A formal forensic audit of the properties for which he is responsible found that:


At the root of the problem is that title has been recorded in the name of a private entity called MERS (Mortgage Electronic Registration Systems) as a mere placeholder for the true owners. The owners are a faceless, changing pool of investors owning indeterminate portions of sliced and diced securitized properties. Their identities have been so well hidden that their claims to title are now in doubt. According to the auditor:

“What this means is that ... the institutions – including many pension funds – that purchased these mortgages don't actually own them....”

The March of the Attorneys General

John O'Brien was thrilled when Massachusetts Attorney General Martha Coakley went to court in December against MERS and five major banks — Bank of America, JPMorgan Chase, Wells Fargo, Citigroup and GMAC. Coakley says banks have "undermined our public land record system through the use of MERS".

Other attorneys general are also bringing lawsuits. Delaware Attorney General Beau Biden is going after MERS in a suit seeking $10,000 per violation. "Since at least the 1600s," he says, "real property rights have been a cornerstone of our society. MERS has raised serious questions about who owns what in America."


This last allegation – that there are fatal defects in the loan documentation – may be even more conclusive than the MERS defect in establishing a break in the chain of title to securitized properties. Mortgage-backed securities are sold to investors in packages representing interests in trusts called REMICs (Real Estate Mortgage Investment Conduits). REMICs are designed as tax shelters; but to qualify for that status, they must be "static". Mortgages can't be transferred in and out once the closing date has occurred. The REMIC Pooling and Servicing Agreement typically states that any transfer after the closing date is invalid. Yet few, if any, properties in foreclosure seem to have been assigned to these REMICs before the closing date, in blatant disregard of legal requirements. The whole business is quite complicated, but the bottom line is that title has been clouded not only by MERS, but because the trusts purporting to foreclose do not own the properties by the terms of their own documents.

The title issues are so complicated that judges themselves have been slow to catch on, but they are increasingly waking up and taking notice. In some cases, the judge is not even waiting for the borrowers to raise lack of standing as a defence. In two cases decided in New York in December, the banks lost although their motions were either unopposed or the homeowner did not show up, and in one, there was actually a default. No matter, said the court; the bank simply did not have standing to foreclose.

In Citigroup v. Smith, 2011 NY Slip Op 52236 (U) (December 13, 2011), the mortgage document acknowledged that MERS was not the lender, but was "a separate corporation that is acting solely as a nominee for Lender and Lender's successors and assigns". The court held that since MERS was not a party to the underlying note, when it assigned the mortgage to plaintiff Citigroup there was no assignment of the note; and "a transfer of [a] mortgage without the debt is a nullity and no interest is acquired by it".

Failure to comply with the terms of the loan documents can make an even stronger case for dismissal. In Horace v. LaSalle, Circuit Court of Russell County, Alabama, 57-CV-2008-000362.00 (March 30, 2011), the court permanently enjoined the bank (now part of Bank of America) from foreclosing on the plaintiff's home, stating:

"[T]he court is surprised to the point of astonishment that the defendant trust (LaSalle Bank National Association) did not comply with New York Law in attempting to obtain assignment of plaintiff Horace's note and mortgage....

"[P]laintiff's motion for summary judgment is granted to the extent that defendant trust ... is permanently enjoined from foreclosing on the property...."

The legal tide is turning against MERS and the banks, giving rise to some interesting possibilities for relief at the county level. Local governments have the power of eminent domain: they can seize real or personal property if (a) they can show that doing so is in the public interest, and (b) the owner is compensated at fair market value.

The public interest part is easy to show. In a 20-page booklet titled "Revitalizing Foreclosed Properties with Land Banks," the US Department of Housing and Urban Development (HUD) observes:

"The volume of foreclosures has become a significant problem, not only to local economies, but also to the aesthetics of neighbourhoods and property values therein. At the same time, middle- to low-income families continue to be priced out of the housing market while suitable housing units remain vacant."

The booklet goes on to describe an alternative being pursued by some communities:

"To ameliorate the negative effects of foreclosures, some communities are creating public entities – known as land banks – to return these properties to productive reuse while simultaneously addressing the need for affordable housing."

States named as adopting land bank legislation include Michigan, Ohio, Missouri, Georgia, Indiana, Texas, Kentucky and Maryland. HUD notes that the federal government encourages and supports these efforts. But states can still face obstacles to acquiring and restoring the properties, including a lack of funds and difficulties clearing title.

Both of these obstacles might be overcome by focusing on abandoned and foreclosed properties for which the chain of title has been broken, either by MERS or by failure to transfer the promissory note according to the terms of the trust indenture. These homes could be acquired by eminent domain both free of cost and free of adverse claims to title. The county would simply need to give notice in the local newspaper of an intent to exercise its right of eminent domain. The burden of proof would then transfer to the bank or trust claiming title. If the claimant could not prove title, the county would take the property, clear title and either work out a fair settlement with the occupants or restore the home for rent or sale.

Even if the properties were acquired without charge, counties might lack the funds to restore them. Additional funds could be had by establishing a public bank that serves more functions than just those of a land bank. In a series titled "A Solution to the Foreclosure Crisis," Michael Sauvante of the National Commonwealth Group suggests that properties obtained by eminent domain can be used as part of the capital base for a chartered, publicly owned bank, on the model of the state-owned Bank of North Dakota. The county could deposit its revenues into this bank and use its capital and deposits to generate credit, as all chartered banks are empowered to do. This credit could then be used not just to finance property redevelopment, but for other county needs, again on the model of the Bank of North Dakota. For a fuller discussion of publicly owned banks, see http://PublicBankingInstitute.org.

Sauvante adds that the use of eminent domain is often viewed negatively by homeowners. To overcome this prejudice, the county could exercise eminent domain on the mortgage contract rather than on title to the property. (The power of eminent domain applies both to real and to personal property rights.) Title would then remain with the homeowner. The county would just have a secured interest in the property, putting it in the shoes of the bank. It could renegotiate reasonable terms with the homeowner, something banks have been either unwilling or unable to do, since they have to get all the investor-owners to agree, a difficult task; and they have little incentive to negotiate when they can make more money on fees and credit-default-swaps on contracts that go into default.

Settling With the Investors

What about the rights of the investors who bought the securities allegedly backed by the foreclosed homes? The banks selling these collateralized debt obligations represented that they were protected with credit-default-swaps. The investors' remedy is against the counterparties to those bets — or against the banks that sold them a bill of goods.

Foreclosure defence attorney Neil Garfield says the investors are unlikely to recover on abandoned and foreclosed properties in any case. Banks and servicers can earn more when the homes are bulldozed – something that is happening in some counties – than from a sale or workout at a loss. Not only is more earned on credit-default-swaps and fees, but bulldozed homes tell no tales. Garfield maintains that fully a third of the investors' money has gone into middleman profits rather than into real estate purchases and "with a complete loss no one asks for an accounting."

Not only homes and neighbourhoods, but 400 years of property law are being destroyed by banker and investor greed. As Barry Ritholtz observes, the ability of a property owner to confidently convey his property is a bedrock of our society. Bailing out reckless financiers and refusing to hold them accountable has led to a fundamental breakdown in the role of government and the court system. This can be righted only by holding the 1 per cent to the same set of laws as are applied to the 99 per cent. Those laws include that a contract for the sale of real estate must be in writing signed by seller and buyer, that an assignment must bear the signatures required by local law and that forging signatures gives rise to an actionable claim for fraud.

The neoliberal model that says banks can govern themselves has failed. It is up to county government to restore the rule of law and repair the economic distress wrought behind the smokescreen of MERS. New tools at the county's disposal – including eminent domain, land banks and publicly owned banks – can facilitate this local rebirth.